Edita Burgos, mother of the disappeared activist Jonas and General Manager of the We Forum, called on journalists to rise above the “more dangerous barrier” to pursuing a story: that which is self-imposed.

Edita Burgos has been brought to the limelight since the involuntary disappearance of her son Jonas. Abducted on April 28, 2007, Jonas remains missing to this day.

Everybody knows she is the wife of the late press freedom icon Jose ‘Joe’ Burgos Jr. But Edita herself was part of the We Forum, the alternative publication the family put up against Marcos’ crony press on May 1, 1977. She was, Edita said, the general manager and janitor. She even helped in distributing copies, talking with the newspaper’s dealers.

Edita reminisced the days the “mosquito press” irked the Marcos dictatorship in her keynote address at the Sixth Congress of the National Union of Journalists of the Philippines (NUJP) held August 23 to 24 in Tagaytay City. 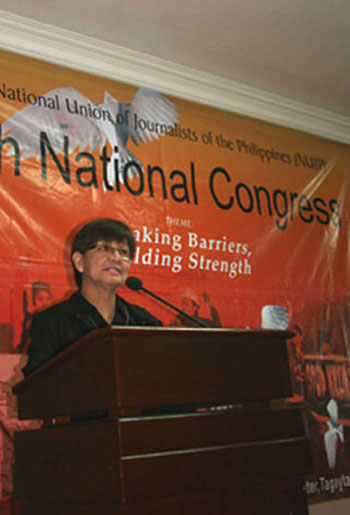 Edith burgosThe We Forum was a weekly independent newspaper. Edita said they had one typewriter and a borrowed table.

She said that the whole family was involved in the publication. Edita recalled that her two daughters, then only 15 and 14, would write articles. Jonas, only nine years old, wanted to be the photographer. When Benigno ‘Ninoy’ Aquino was killed in 1983, JL, the youngest, insisted on joining the funeral march.

Edita said what they wanted was to ‘seek and live the truth and share a vision.’

Edita said, “Are there still barriers today? With the latest in technology, traditional barriers of time, geography, distance have diminished if not completely eliminated. Today it is just a matter of looking for a wi-fi area to send a story.”

She recalled, “In Malaya, we did not have a telephone. Reporters fall in line and wait for their turn to use the typewriter.”

On December 7, 1982, Joe was arrested, along with other We Forum columnists, including Dean Armando Malay. A few months after his release, Joe founded the Ang Pahayagang Malaya (The Independent Newspaper) in early 1983. We Forum resumed publication in 1985.

Edita said they usually had pandesal and sardines as merienda (snack). Every one would dip their pandesal in a bowl of sardines, she related.

Edita said, “When we did not have money, somebody would say, ‘Para sa inang bayan.’ (For the Motherland.)”

Defining barriers to truth, Edita said that the gatekeepers – they who decide what is to be printed or announced- could be a barrier.

She said, “How often have I been told, that a story has been written yet not printed, or an investigative project has been submitted yet not aired over radio or television.”

Still, she considered this as one of the ‘mildest or the weakest barriers that could deter journalists from coming out with the truth.’

She continued, “Our experience in We Forum and Malaya told us that those who worked with establishment newspapers, whose stories were ‘killed’ by their editors, did their job anyway, of reporting the truth. They gave their stories to us, and the stories saw print, of course, minus their bylines.”

Edita said that current practices and the low standard of practitioners in the beat could also be a barrier.

Edita said a young journalist was ostracized by her colleagues because the latter did not rely only in the releases handed to them by the information officer but did her own ‘investigation’ for her stories. “She unwittingly showed (them) what they weren’t,” she said.