The Cuban Revolution: 50 Years After Victory

Spain ceded Cuba – together with Guam, the Philippines, and Puerto Rico to the US under the 1898 Treaty of Paris.

On May 20, 1902, Cuba gained formal independence from the US, with Tomas Estrada Palma becoming its first president. But under the new Cuban Constitution, the US retained the right to intervene in Cuban affairs; while under the Platt Amendment the new Cuban government agreed to lease the naval base at Guantanamo Bay to the US.

“For over 50 years our people would endure corrupted governments and new US interventions, the (Gerardo) Machado tyranny and the frustrated revolution that overthrew him,” the younger Castro said. “Later, in 1952, the coup d’etat, dealt with the support of the US administration, reinstated the dictatorship. This formula was commonly applied in those years to ensure its dominion in Latin America.”

Gen. Fulgencio Batista staged a coup on March 10, 1952 amid a hotly-contested presidential election in which he appeared to be on the losing end. The US government, with Harry Truman as president, recognized the Batista regime on March 27 that same year.

Shortly after, Batista suspended all constitutional rights – including the right to strike.

“It was clear to us that the armed struggle was the only way. Again, the revolutionaries would have to face – as Marti before us – the dilemma of the necessary war for independence that was cut short in 1898,” the younger Castro said.

The attack on the Moncada Barracks and the barracks in Bayamo ended in defeat, with the Castro brothers being captured. After a trial, Fidel and Raul were sentenced to 15 and 13 years in prison, respectively.

Public pressure led to the Batista government’s decision to release political prisoners, including the Moncada attackers, in 1955. The Castro brothers joined exiled revolutionaries in Mexico, where they organized a revolution to overthrow the Batista regime.

On Dec. 2, 1956, exiles under the elder Castro – who would later become known as the 26th of July Movement – arrived in Cuba aboard the Granma and went into the Sierra Maestra mountains. Three days into their trek, they were attacked by Batista’s forces, with only a few of them surviving the initial firefight.

In the next few years, Castro’s group did organizing work among peasants and coalesced with other revolutionary groups. The 26th of July Movement gained a significant victory against Batista’s forces in mid-1958 and thereafter began its offensive. The revolutionary forces captured major cities one after the other in the succeeding months, and Batista fled Cuba on Jan. 1, 1959.

“The Cuban rebel army defeated the government of Fulgencio Batista, and for the first time they entered Santiago de Cuba and declared the real and final independence of Cuba,” Jimenez said. “In 2009, we celebrate half a century of real independence.” 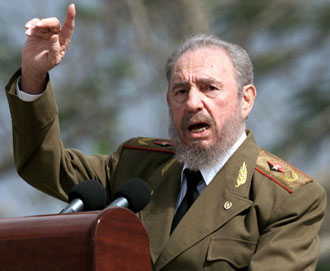 “This victory is twice as worthy for it has been attained despite the unhealthy and vindictive hatred of the powerful neighbor,” the younger Castro said, referring to the US. “The promotion and support of sabotage and banditry; the Playa Giron [Bay of Pigs] invasion; the blockade and other economic, political and diplomatic aggressions; the permanent slandering campaign aimed at denigrating the Cuban Revolution and its leaders; the October [Missile] Crisis; the hijackings of and attacks on civilian planes and sea crafts; the state terrorism, with its terrible result of 3,478 dead and 2,099 maimed; the attempts on the life of Fidel and other leaders; the murder of Cuban workers, farmers, fishermen, students, diplomats and combatants; these and many other crimes bear witness to the stubborn insistence on putting out, at any cost, the beacon of justice and honor that Jan. 1st meant to so many.”

Jimenez cites among the Cuban Revolution’s achievements the reduction of infant mortality – from 60 for every 1,000 live births before 1959 to 4.7/1,000 today. Illiteracy in Cuba, he also said, was more than 20 percent before 1959; this, he said, has been reduced to 0.01 percent. “We have finished off rural poverty, we have finished off unemployment, and we are developing culture and science,” Jimenez also said.

For the younger Castro, it is the fighting spirit, the independence of will, and the unity displayed by the Cuban people, which have enabled them to gain these victories amid numerous adversities.

“Resistance has been the key word and the explanation for every one of our victories throughout this half century of continued fighting while we have consistently acted on our own and taken our own risks notwithstanding the extensive and decisive solidarity we have received,” he said.

“Since Oct. 10, 1868, disunity had been the main cause of our defeats. After Jan. 1st, 1959, the unity forged by Fidel has been the guarantee of our victories. Our people have been able to preserve that unity despite all of the ups and downs and the attempts at division, and have rightly placed common aspirations above differences, crushing meanness with the strength of collectivism and generosity,” he also said. (Bulatlat.com)