When the sessions of Congress resume on January 19, the progressive party list bloc in the House of Representatives would push anew for House Bill 3059 or the Genuine Agrarian Reform Bill (GARB). Anakpawis Rep. Rafael Mariano said they expect to encounter rough sailing when they push for the bill, but they are not afraid to lose. Mariano believes that the ensuing debate on the bill could put the long-standing demand of the peasantry for a genuine and thoroughgoing land reform program in the national agenda.

When the sessions of Congress would resume on January 19, the progressive party list bloc in the House of Representatives would push anew for House Bill 3059 or the Genuine Agrarian Reform Bill (GARB).

In an interview with Bulatlat, Anakpawis (Toiling Masses) Representative Rafael Mariano said they would call on the House Committee on Agriculture and the House leadership to discuss the bill for a new agrarian reform program. The bill is being sponsored by Representatives from Anakpawis, Bayan Muna (People First) and the Gabriela Women’s Party.

“We expect a continuation of the deliberations and debates on GARB at the committee level. Maganda kung maitulak hanggang plenary,” (It would be good if the discussions reach the plenary.) he said. 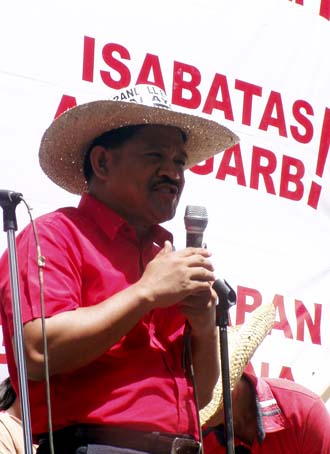 Mariano, also chair of the Kilusang Magbubukid ng Pilipinas (KMP of Peasant Movement of the Philippines), said House Bill 4077, which aims to extend the Comprehensive Agrarian Reform Program (CARP) for another five years from 2009 to 2013, is problematic.

“Paano mo i-e-extend ang batas na nag-expire na?” (How would you extend a law that has already expired?) Mariano asked.

In December, the Senate and the House of Representatives adopted Joint Resolution No. 19, extending the 20-year old agrarian reform law for another six months. Joint Resolution 19 removed the compulsory acquisition scheme and deferred the acquisition of lands with pending notices of coverage, like the Arroyo lands in Negros.

Mariano said a mere resolution could not extend a law. “They must re-file the bill if they would want to re-enact the CARP. But the Congress must first tackle GARB.”

Mariano reiterated his position that the CARP’s extension would pave the way for more cases of land grabbing. He said the voluntary offer to sell and voluntary land transfer schemes stated in the joint resolution may easily be withdrawn.

He said that from January 1 to June 30, 2009, landlords may file for cancellation of certificates of landownership award (CLOA), or for exemption from CARP coverage or may apply for land-use conversion, among others, to fall within the provision of the said joint resolution deferring acquisition of lands with pending notices of coverage.

It would worsen the agrarian unrest, said Mariano. Land monopoly is the only status quo achieved by the said resolution, he added.