You Are Here: Home → 2009 → June → 7 → Poor and Sick Filipinos Pay Dearly for Failure of Cheaper-Medicines Law

MANILA — A law that was supposed to provide cheaper and quality medicines to Filipinos has failed to deliver on its promise — a promise that was hamstrung by the law’s own defects and the seeming inability of the government to muster the political will to go against transnational drug companies, according to health and consumer advocates.

Called “The Universally Accessible Cheaper and Quality Medicines Act of 2008,” or Republic Act 9502, the law sought to correct what many called a scandalous anomaly in a poor country like the Philippines, where medicines and drugs are among the most expensive in Asia.

The law “proved to be irrelevant and useless,” said Dr. Gene Nisperos, vice-chairman of the Health Alliance for Democracy (HEAD) in a conference last week. “In hospitals, whether private or public, prices of medicine have not changed with this law,” he said.

Because of its many flaws, RA 9502 has failed to bring down the “inhumane” prices of drugs and medicines, said the Consumers’ Action for Empowerment (CAE) .

Amid the usual finger-pointing and bickering, the CAE said that the Department of Health (DOH) isn’t the only party accountable for the failure. “Although we’re in agreement that the Senate and other government fora should take the DOH to task for its failure in implementing the law, we’ve been saying that the law itself has inherent flaws,” Nisperos said.

The consumer group traces the uselessness of the law largely to its failure to break “the control of transnational corporations on all aspects of the [drug] industry.” Estimates put the share of transnational companies in sales alone of medicines and pharmaceuticals in the Philippines from 68 to 72 percent. Last year, pharmaceutical sales in the country amounted to P116 billion. 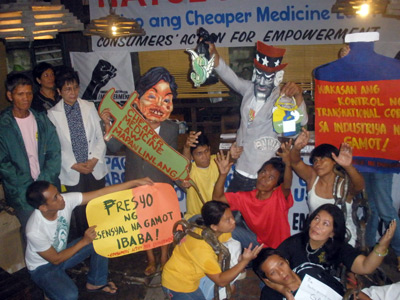 According to the group, RA 9502, signed by President Arroyo on June 6, 2008, also failed because, although between 80 and 90 percent of essential drugs being sold in the Philippines are no longer patented, the law did not provide for the development of a sound local drug industry that could have taken advantage of the fact that previously patented medicines can now be developed by local manufacturers.

CAE criticized the policy of dependence being fostered by RA 9502, which gives particular focus on drug importation, including parallel importation.

While it would seem that consumers can benefit from parallel importation, it actually discourages the development of the local drug industry. In fact, RA 9502 has not shown any support to local manufacturers, said Eleanor Nolasco of Health Action Information Network (HAIN). Eventually, it will kill the Philippine pharmaceutical industry, she said.

Moreover, the law failed to make sure that parallel importation, such as it is, will redound to the benefit of poor Filipinos.

Under parallel importation, the same drug that is manufactured and priced high in the Philippines can be imported – with or without the consent of the patent owner — from another country and sold here for prices that are several times lower than the ones produced locally. This is a method that transnational drug companies like Pfizer oppose because it obviously cuts their profits in countries where drugs are expensive, like the Philippines.

At first glance, parallel importation seems beneficial to consumers. But, according to the health-advocacy group KilosBayan Para sa Kalusugan, this is not necessarily true.

According to the Philippine International Trading Corporation (PITC), the trading and importing arm of the government, drugs that can be imported from India or Pakistan can be sold at half the price in local pharmacies.

But KilosBayan, in a primer, said these imported drugs can be sold at a much lower price. It cited Ponstan (mefenamic acid), which can be bought in India for the equivalent of P2.58 and in Pakistan P1.29. And yet, the same pain killer is sold for P11.25 in the 10,000 or so Botika ng Barangay outlets set up by the Arroyo administration, which promised half-priced medicines. Ponstan is sold for P25 pesos in commercial pharmacies.

“Why set the reduction of prices at just half of commercial prices when this could be lowered even more?” KilosBayan asked in its primer, citing the prices in India and Pakistan.