Cocoy, a close friend of Karen’s who talked to Bulatlat on condition of anonymity, described her as “a simple hardcore activist.”

Karen’s wardrobe is that of the usual activist – tubao (scarf) in her head, Mojo sandals, T-shirts printed with political words and images.

Karen is a jolly fellow who had the tendency to use gay language and expressions, such as “Ano veh?” (“Cut it out!”) each time someone teased her. She is also very playful, Cocoy recalled. “I feel dizzy. I need love,” she would exclaim, feigning to faint.

During one demonstration in front of the Senate to protest a bill that would revise the UP charter, Cocoy recalled how Karen maintained her mirth despite becoming so agitated when a policeman struck her with a truncheon. She was so angry at the police, Cocoy recalled, but a few seconds later, she was already laughing about it. “I lost my poise,” Karen said, grinning.

Karen’s life trajectory at UP was going toward being an activist. She stayed in the Sampaguita and Kalayaan dormitories during her first years at the university but later transferred to a boarding house with fellow activists.

This provided her room to pursue her activism; her playfulness did not disappear. She and her housemates would sometimes even play hide-and-seek at a nearby grocery, Cocoy recalled.

Cocoy said Karen would always see to it that the house was clean. “She is caring, like a mother. She would always remind us of little things. We call her Nanen, a combination of the words nanay (mother) and Karen.”

Beneath her cheerful disposition, Karen is a serious activist. “She is never late during meetings,” Cocoy said. “She wants to be as detailed as possible about plans.”

Cocoy said they would wake up early, have some coffee and Karen would play the guitar. Her favorite song is “Bangon, Maria.”

“I used to wake up late and was always late for meetings,” Cocoy confessed. Karen, he said, changed him. “She speaks her mind,” he said.

Karen is a good organizer. “She was among those who established the Anak ng Bayan chapter in Payatas,” Cocoy said, referring to a progressive youth group. Payatas is an urban-poor community in Quezon City.

“Her heart is pure. Her trust in her comrades and in the masses is genuine,” Cocoy said.

It was inevitable that, for her sociology thesis, Karen chose to study and chronicle the life of peasants in Bulacan.

Sherlyn is the second in six siblings. Her mother, Linda, described her to Bulatlat as a helpful daughter and sister. “She does the household chores,” Linda said.

Sherlyn’s father, Asher, said Sherlyn is also thoughtful. “She always called me up when I was working in Mindoro.” Wherever she was, she would always go home to celebrate important occasions with her family. 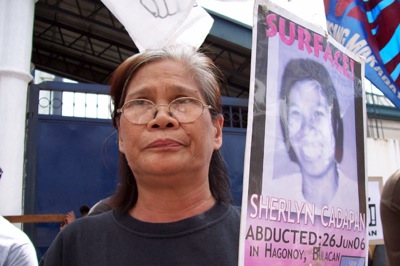 Linda Cadapan, seen here at a picket in front of the NICA building on June 26, is proud of her Sherlyn. (Photo by Ronalyn V. Olea / bulatlat.com)

Sherlyn played the role of big sister to her siblings. She would often write to them, Linda said, reminding them of important things.

While studying in UP, Sherlyn made sure to look after a younger sister who was also enrolled at the university. “They had limited allowance. When it was time to eat, she would see to it that her sister had something to eat, too. She shared everything with her sister,” Linda said.

To support her needs in school, Sherlyn worked as a tutor. “Life in college was difficult. Sometimes, we could only give them just enough for their transportation,” Asher said.