By seeking to convince its readers that the effects of Ondoy were “felt equally by rich and poor” and that it was a “great equalizer,” the Philippine Daily Inquirer, the most influential newspaper in the Philippines, was attempting to bolster the view that the Filipino class system had nothing to do with the disaster, and that the lives of all Filipinos are shaped by the same forces of nature, even by fate or by God.

Catastrophic events such as typhoons and the destruction that they bring do not happen in a vacuum. They are insufficient in themselves to create human disaster. A storm that rages over an uninhabited island in the middle of the ocean would not be a human disaster. So any event such as Ondoy must be seen in the full context, the human conditions — social, political and economic — in which it occurs. As Mike Davis and others have argued, disasters occur not as “natural events” but largely as a consequence of the conditions that have been constituted by the rich and powerful in society. [1] It is the web of relationships in a society that, in a sense, “prepare” it for a tragedy such as Ondoy, then Pepeng.

In reporting the devastating human effects wrought by Ondoy, the Philippine Daily Inquirer, a major media player and the most influential newspaper in the Philippines, clearly displayed its primary ideological role. [2] By seeking to convince its readers that the effects of the storm were “felt equally by rich and poor” and that it was a “great equalizer,” [3] the newspaper was attempting to bolster the view that the Filipino class system had nothing to do with the disaster, and that the lives of all Filipinos are shaped by the same forces of nature, even by fate or by God. [4] When it comes to such things as “natural disasters,” we all suffer, rich and poor. So blame the weather, not the system. 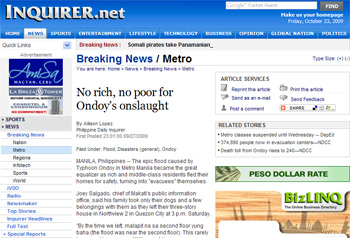 An Inquirer story on Ondoy

Such open ideological work in support of the ruling-class-in-general is not always the way of the Inquirer. Thus for many years it has been staunchly attacking one section of the ruling class, the Arroyo bloc that is governing the country. In that vein, it has seemed almost radical in pursuing greed, corruption and kickbacks; junketing extravagance; electoral manipulation and cheating; violations of human rights such as extrajudicial killings and disappearances, torture, intimidation and harassment by state agents; abuse of executive privilege; subverting institutions of the state such as the Ombudsman and the Supreme Court by appointment of “loyalists”; and countless other failings of the Arroyo regime.

But the reporting of Ondoy revealed the Inquirer in its more fundamental mode, as a spokesperson of the ruling-class-in-general, purveying ideologically driven slanted news that provides guidance to its readers and others it influences indirectly through them. Thus the meaning of the storm, and the terrible effects, was constructed in a particular way. The tragedy was “framed” so that it can be understood in a way that tends to reinforce the class structure. [5] Such framing has an ideological function: to maintain the hegemony of the ruling class-in-general. To do this it must achieve the following: 1) to deflect responsibility for the disaster away from the ruling-class-in-general and the exploitative system from which they benefit (to the detriment of the mass of people); and 2) to use the event as an opportunity to portray that hierarchal and unjust system as a “natural” part of a sometimes cruel world where all must expect to suffer, rich or poor alike, just as we are sometimes told in tough economic times that “we are all in it together” or “everyone has to tighten their belt.”

It appears that Ondoy killed several hundred people while hundreds of thousands have been negatively affected — homeless or temporarily without proper shelter, food or water. And the loss of property has been very considerable in many areas. Despite the Inquirer’s focus on Metro Manila where there was widespread flooding and some loss of life as well as some population dislocation and destruction, it is in the provinces where widespread flooding and mudslides caused far greater loss of life and much damage to property and possessions. And overwhelmingly in the rural areas, it is the poor who year after year suffer the most from these continuing typhoon-tragedies.

Even in Metro Manila, much of the loss and most grievous suffering was in the poor areas although the Inquirer reportage tended to suggest that the people feeling the effects in Metro Manila, for example in the Marikina River area, parts of Makati and Quezon City, were rich and middle class. They produced numerous accounts by people, or of their friends, who had experienced water in their homes, destruction of property and apparently some loss of life, for example in Provident Village. [6] There is an interesting use here of “middle class” to equate with “rich.” There is no mention of anyone who is actually rich , so their reference to the rich suffering with the poor is not even supported by their own evidence; but that conflation of rich/middle class does add to the idea that the system is not so skewed toward a few hugely rich who live separated from the poor. Of course, the real rich – the Inquirer, the Lopezes, Ayalas, Cojuangcos, Tans, Pangilinans, Sys and others – do not even get their toes damp when floods develop in the country. And while there was certainly flooding and damage to the middle class, there is no comparison to the loss of life suffered by the Manila poor in barangay Silangan and other areas, nor to their incapacity to bear the loss of personal property and homes. [7] For the most part, the poor live on the edge and their losses are, in relative terms, far more disruptive to their life conditions especially in the longer term, a point made by an Ibon Foundation report [8] (not reported in the Inquirer).

By treating the storm as a natural catastrophe (or due to the contemporary all-purpose whipping boy, climate change) [9] that affected rich and poor alike, the Inquirer avoided the fundamental critique that could have been made.This is hardly a surprise, for unlike its ongoing populist critique of class competitor Arroyo (an old enemy of the Inquirer-led faction of the ruling- class-in-general), such a fundamental critique would necessitate a class analysis that would expose the systemic causes for the historic and continuing victimization of the working-class poor and the marginalized at the bottom of the Filipino class structure. To do so would reveal the lack of “equalization” in suffering, the ludicrousness of the claim that “rich and poor” suffer equally. Such honest reporting would not even be attempted in a newspaper that represents general ruling class interests. Attacking the policies and practice of a class fraction is acceptable, and the Arroyo gang are fair game. Pointing to lapses in their preparation for typhoon rescue and relief is one thing [10] but an honest assessment of the more fundamental causes of the disaster is quite another.