Motor vehicle owners can now register or renew the registration of their vehicles without having to pay for RFID tags. Motor vehicle owners and drivers can also rest assured, for the time being, that traffic enforcers will not have RFID as additional excuse in flagging them down and potentially milking them of their earnings, said Bayan Muna Rep. Neri Colmenares.

The SC’s order is stronger than a temporary restraining order, Colmenares told Bulatlat, because it bans with “no life span” the implementation of RFID project, pending decision on the main point they have raised in their petition against RFID. 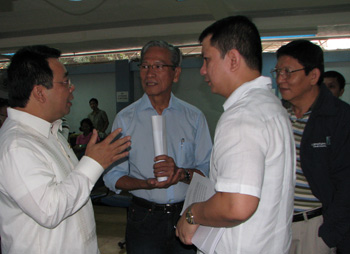 Bayan Muna Reps. Neri Colmenares and Satur Ocampo with LTO and Stradcom officials during a visit to the LTO on Jan. 14. (Photo byFred Dabu / bulatlat.com)

They questioned RFID’s constitutionality and legality, saying it did not go through a public bidding and that its government proponents have exceeded their authority in imposing a new requirement for motor registration without new legislation.

They likewise expressed fear that the undue haste in implementing the LTO-Stradcom project might be election-related: the billions of pesos of expected collections from the RFID can help defuse an impending fiscal crisis for Arroyo as well as boost her administration’s election war chest, said Bayan Muna representatives Satur Ocampo and Teddy Casino.

When Bayan Muna lawmakers dropped by at the LTO two days after the high court’s order, they found out that the LTO has neither procedures nor plans for refunding the almost 90,000 car owners it had compelled to buy RFIDs prior to the SC order.

Because the LTO began implementing the assailed project earlier than its Jan. 10 planned start — drawing the ire of motor vehicle owners such as Senator Aquilino Pimentel Jr., who called it “an illegal exaction” — the LTO has already amassed more than P46.7 million, based on the reported P519 cost of RFID in Metro Manila. (It reportedly costs more in the provinces). But the LTO prefers to hold on to the money, saying the high court decision is not yet final.

“Can’t the LTO understand that a status quo ante order means we have to go back to pre-project implementation period, when there was no required RFID to register or renew registration? The LTO must promptly return the money to those they’d forced to buy their RFIDs,” said George San Mateo, secretary general of Piston. He added that if, later, the RFID were found to be appropriate for implementation, then that is the time the LTO can start selling RFIDs.

Indeed, why rush the forcible selling of RFIDs when it appeared that even without the Supreme Court ban, its use would only likely begin in October 2010? According to Colmenares, the support equipment to make RFIDs useful, such as scanners, as well as the rules and regulations in its use on the road, will only be available in October, based on what the LTO told him and Ocampo when they checked with the LTO.

It only bolsters suspicions that the Arroyo government has plans for the money the LTO-Stradcom project would raise with RFIDs, Colmenares told Bulatlat.

If the Supreme Court had not blocked the RFID tagging, it appears that RFIDs would only have created more traffic jams and, perhaps, more excuses for the traffic enforcers from the LTO, MMDA, the police and the local government units to fine drivers of vehicles on account of doubtful RFIDs. According to Colmenares, the Stradcom and LTO couldn’t even clearly answer technical questions such as what will they do if one of three or more closely running cars on the road flashed a doubtful RFID, flag all of them for questioning?