MANILA — Visual artist Neil Doloricon, art professor and former dean of the University of the Philippines (UP) College of Fine Arts, did not attend last week’s awarding by the UP of its University Artists because he did not feel like celebrating when his wife Angela Doloricon is in solitary confinement at Camp Capinpin in Tanay, Rizal. Angela has been a health worker for nearly three decades now, or “since we got married,” Neil told Bulatlat.

Angela, 50, has worked with CHESTCORE (Community Health Education, Services and Training in the Cordillera Region) and the health services of Kilosbayan before she formally joined the Council for Health and Democracy (CHD) more than a decade ago. She is one of the 43 health workers illegally arrested last February 6 and currently being detained at Camp Capinpin.

The past week should have been a happy occasion for the Doloricons because being awarded by UP as one of its “University Artists” is like receiving a productivity award and a recognition of Neil’s talent and commendable output as an artist. But on the day of the awarding, he took a lonely two-hour drive instead to his wife’s detention cell in Rizal. 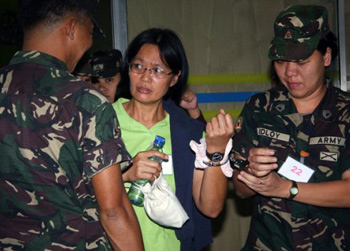 Angela Doloricon during the habeas corpus hearing at Court of Appeals. Doloricon is in solitary confinement at Camp Capinpin said husband, Neil. (Photo by Raymund B. Villanueva/bulatlat.com)

For the mother of one of the detainees, the torture is also physical. Adoracion Paulino, the mother of Vincent Paulino, tearfully begged the rest of the relatives and the media to help them free the detainees as soon as possible because, she said, her son told her he’s already been “wrung dry” and very tired and tender from all the beatings and interrogation sessions inflicted upon him by the AFP.

Paulino is the health worker presented last week by the AFP to the media as an alleged NPA guerrilla who expressed his desire to give up. His mother said the statements he gave had been extracted from him by the military at a great physical and psychological cost to his son. “I saw my son’s face and arms swollen. Next I saw him, I noticed that his skin was very red like he was sunburned. The next time, when I came to visit him, I was told he was taken out. It was only later that they told me he was brought to a press conference organized by the military and made to say dreadful things,” Mrs Paulino said.

She added that in her previous visits her son told her the military had been taking him out of jail at night and threatening to kill him and his sibling if he would not agree to what the military wanted him to say.

Volunteer medical doctors for the “Free the 43 Health Workers” movement decried the military’s refusal to let them examine the 43 detained health workers. They repeatedly requested, with the lawyers and family members, the camp authorities to let them see the detainees but they were rebuffed nine times.

“We were only allowed to see the detainees on February 11 (six days since their illegal arrest) and only upon the intervention by the chairperson of the Commission on Human Rights, and on February 24 but only one of the three physicians was allowed to enter. Under severely restricted conditions, the check-ups merely lasted for 10-15 minutes and under the scrutiny of two to three guards standing close by, which made our patients feel uneasy. Such is the violation of their right to health and their right to privacy,” said Dr. Julie P. Caguiat, executive director of Community Health Development Foundation (COMMED).

According to reports from the families, Dr. Caguiat said their colleagues, who are now their patients too, “continue to suffer from medical conditions.” Two of them asked their custodians for emergency medical assistance but it was not promptly provided.