MANILA –Workers led by KMU (May First Movement) ridiculed the latest “measly P22 ($0.47) wage hike” ordered by the National Wages and Productivity Commission (NWPC) for Metro Manila this week. Due to take effect by end June, the recent mandated increase would benefit Metro Manila’s estimated 2 million workers only. While the KMU considers the latest wage order as worthless as play money, employers complain that they could only afford to give a P10 ($0.21) increase.

“The regional wage board has granted loose change, but the employers will further shrink it into centavos. This is a huge insult to workers who are supposed to have been regarded as this society’s hero as well as the main actor that breathes life to the economy,” KMU executive vice president Joselito “Lito” Ustarez told Bulatlat.

In a protest before the NWPC Thursday June 10, the workers’ group symbolically shuttered the gates of NWPC offices in Ermita, Manila.
“We demand the abolition of the NWPC and all the regional wage boards. For the longest time, they have acted as an instrument of the government and capitalists against the workers’ struggle for a P125 ($2.677) legislated wage increase,” said Ustarez.

Created in 1989 under Republic Act No. 6727 of the Aquino administration, the regional wage boards oversaw the two-decade plunge in the value of wage hikes being granted to Filipino workers, despite the recorded continuous rise in employed workers’ productivity and in corporate profits.

The KMU stood pat in its position that calls for substantial wage increase should be directed at the national government – the legislature and the president, in particular. At the same time they accused the government-backed Trade Union Congress of the Philippines (TUCP) of playing “accomplice to the Arroyo government’s last-ditch public relations (PR) stunt for workers by taking the wage hike call to the regional wage boards.”

The TUCP filed a P75 ($1.606) wage hike petition with the NWPC in Metro Manila last April while progressive labor has been pressing the Arroyo government to legislate a nationwide P125 ($2.677) wage hike since 1998. 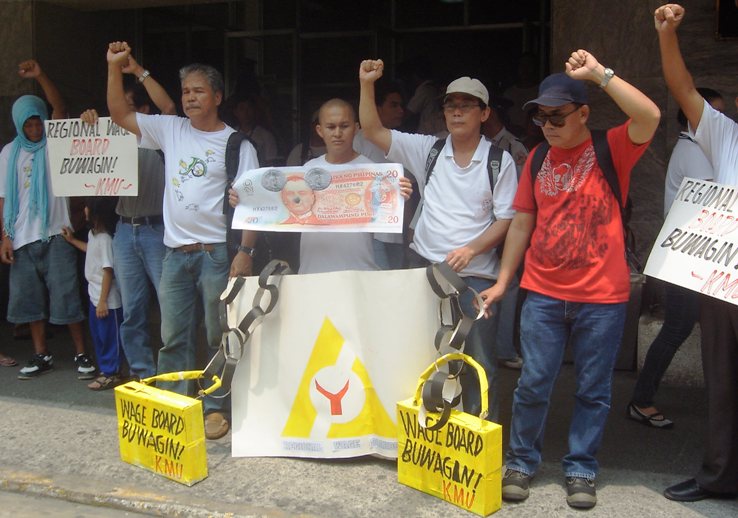 “True to being a pro-government, pro-business trade-union center, the TUCP again fell into the trap of filing petitions for wage hikes in the regional wage boards. As expected, a wage board has again given mere crumbs to workers. Now, the TUCP cannot help but feign indignation over this meager wage hike – an insult to workers which is a result of its actions,” Ustarez said.

If the said wage hike is an Arroyo’s goodbye PR stunt, it could hardly deodorize her administration’s anti-worker record. The Arroyo administration has the longest-running term since Marcos, but, according to IBON, it has given the smallest increase in workers’ real wages over the last nine-and-a-half years. The real wage in February 2001 or the start of the Arroyo presidency was pegged at P237 ($5.07), which implies an increase of just P5 ($0.107) over her entire term. The nominal wage in February 2001 when Arroyo took over in Malacañang was P250 ($5.355).

But these did not mean that the Aquino, Ramos and Estrada administrations had been kinder to a decreasing degree to workers. On the contrary it was under the Cory Aquino administration in 1989 when the Regional Wage Boards were created and the Herrera Law was enacted.

The said two laws were the first major revisions in the Philippine labor code which further weakened union rights and benefits to the detriment of the workers’ previous hard-won rights. These laws were enacted to further attune the Philippine labor market to the demands of globalization, where workers and wages are supposed to seek their value in a “free” market. Under these laws’ anti-worker provisions, the number of new unions, new collective bargaining agreements, strikes and wages in the country all took a plunge since 1989.

The two labor laws legalized the past two-decade assault on workers’ unionism and ability to seek better wages, while all past regimes from Marcos to Arroyo have pegged the country and its workers on a foreign investment-led, export-led growth economic model. This turned the country’s manufacturing sector into export-oriented sweatshops to serve the needs of foreign corporations for cheap labor.