MANILA — About 3,000 employees of the flag carrier Philippine Airlines (PAL) are on tenterhooks because of threats to their regular jobs and the existence of their union. This week they expect to get a sample of what President Benigno S. Aquino III said would be his “litmus test in labor relations.”

The workers’ fear of losing their regular jobs and their union stems from PAL’s plan to “spin-off” three “non-core businesses.” The airline has been trying to implement it since May 31. The employees who stand to be affected comprise nearly half of the total 7,488 workforce as of March 2010, including some foreign-based Filipino employees and the office of the president and COO. PAL would also rout the membership of PALEA, the rank-and-file employees’ union whose membership has been reduced to 3,732 after PAL implemented an early retirement program in 2009.

Up for “spin-off” are PAL’s airport services department with about 2,000 workers (covering ground handling, cargo terminal/handling and ramp handling), inflight catering services with about 1,000 employees, and call center reservations, which has 172 currently employed, according to Gina Licayan, a member of the union board. They have been working with PAL from seven to more than 30 years now. 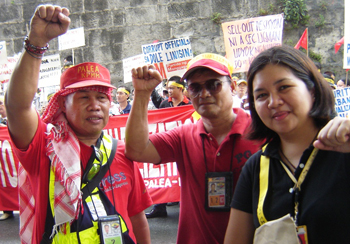 L-R: Danilo Palomena, Rigmo Ondevilla and Gina Licayan have been working with PAL from seven to more than 30 years now. (Photo by Marya Salamat / bulatlat.com)

“At least you still have a job, though as a contractual,” the workers quoted their human-resources department as telling them in April.

“You give almost all your life working for PAL, then all of a sudden they write to tell you you are already laid-off,” a ramp-handling supervisor told Bulatlat in Tagalog. The supervisor has been with PAL for 35 years and he anticipates another five years before his mandatory retirement.

All the affected employees have received notices of termination last April. So far, it is only their united resistance to the PAL management’s efforts to hand them over to the 3rd party providers that has been aborting the move.

For Greater Profits and Not to Stave Off Losses

As PAL management explained to the media, the spin-off was meant to stave off losses by reorganizing its workforce to become “leaner and more efficient,” but according to the Kilusang Mayo Uno (May First Movement), it was intended more to “maximize company profits rather than reduce losses.”

Tycoon Lucio Tan, a former crony of strongman Ferdinand Marcos, is ranked by Forbes magazine as the second richest Filipino with his net profit jumping to P83 billion ($1.74 billion) in 2009 from P74 billion ($1.66 billion) the previous year.

It was in 2009 when PAL supposedly recorded losses, following a year when its profits first took a dip after years of sustained growth, and right after coming out of rehab as it completed paying off its $2 billion loans in 1998 for the airplanes it purchased. In a statement, the Anakpawis partylist chapter within PAL have questioned the supposed loss. “How could an airline that yearly increases its passengers and revenues end up with losses?” they asked.

The supposed losses being incurred by PAL today, in the wake of record-high revenues and number of passengers, struck some workers with a sense of déjà vu. The workers recalled how similar complaints of losses led to PAL’s imposition of a 10-year suspension of its CBA 12 years ago, sending an unfortunate precedent not only for PAL employees but also for the entire Filipino labor movement.

This year’s announced spin-off coincided with the ending of the CBA suspension, which had been extended for another year under former PALEA president Edgardo Oredina, who, employees note, is also active today at convincing them to agree to the spin-off.

Progressive PAL workers said they have had traumatic experiences at being sold out by their union leaders and given the short end of the stick by Lucio Tan.

After starting the bitterly opposed 10-year CBA suspension in 1999, the Lucio Tan Group implemented its first spin-off in 2000, involving the maintenance and engineering department of PAL M&E, dubbed as the country’s premier aircraft maintenance department. The spin-off affected about 1,800 highly skilled regular employees. At the time, it was the progressive bloc within PALEA that was tenuously holding the reins of union leadership, after the union leaders who were accused of selling out the union for CBA suspension were excoriated by the members. This union fought the spin-off but in the end only managed to push for the affected employees’ non-diminution of benefits, as its leaders were soon laid off or dislodged by PAL management, which lent its support to its preferred leaders especially those who gave in to the CBA suspension.

In PAL’s first spin-off the M&E department was acquired by a Lucio Tan Group’s joint venture with German Lufthansa Technik, which is now one of Lucio Tan’s companies under MacroAsia Corp.