“It has been 100 days and we don’t see any major achievement or results as far as genuine change is concerned. There is plenty of rhetoric but too few accomplishments that could be felt by the poor.”– Bagong Alyansang Makabayan

MANILA – Contrary to the passing grade Aquino has received from a survey, farmers, workers, urban poor, students, migrants and other sectors gave Aquino a failing grade in his first 100 days of governance.

Members of progressive groups led by the umbrella group Bagong Alyansang Makabayan (Bayan) marched to Chino Roces (formerly Mendiola) bridge Oct. 8, to mark the 100 days of Aquino in office. The groups protested what they call as a continuing absence of any meaningful reform under Aquino, and his failure to address issues such as human rights, the prosecution of former president Gloria Macapagal Arroyo, land reform and pro-people economic development.

“It has been 100 days and we don’t see any major achievement or results as far as genuine change is concerned. There is plenty of rhetoric but too few accomplishments that could be felt by the poor,” Renato Reyes, Jr. secretary general of Bayan, said. 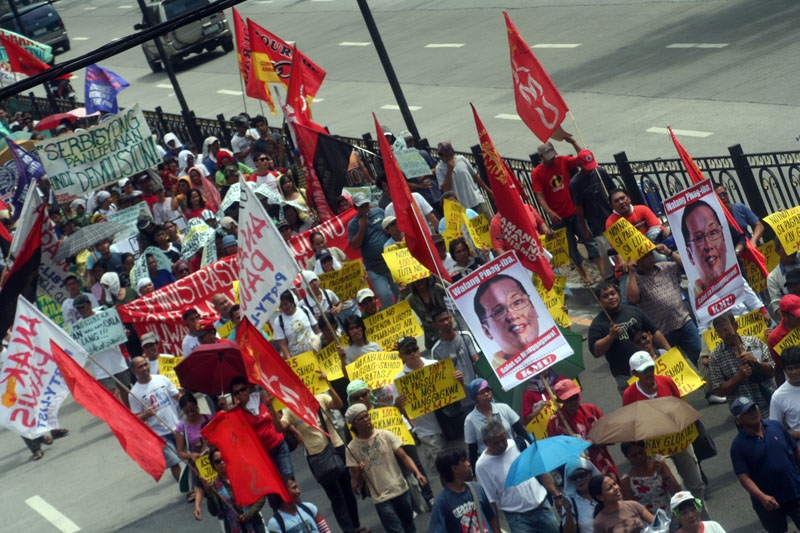 Reyes said so far, there has been no development in the investigation of the Truth Commission of Arroyo’s crimes.

“The investigation and prosecution for corruption of Arroyo is not only Aquino’s campaign promise but is also one of the pressing political issues that he needs to address,” Pagbabago said.

“He said in his inaugural speech that there can be no reconciliation without justice and yet he extended the counter-insurgency program Oplan Bantay Laya,” Roneo Clamor, Karapatan acting secretary general, said .

“All he talked about is money and government. We’re worried about people’s lives,” Clamor said. 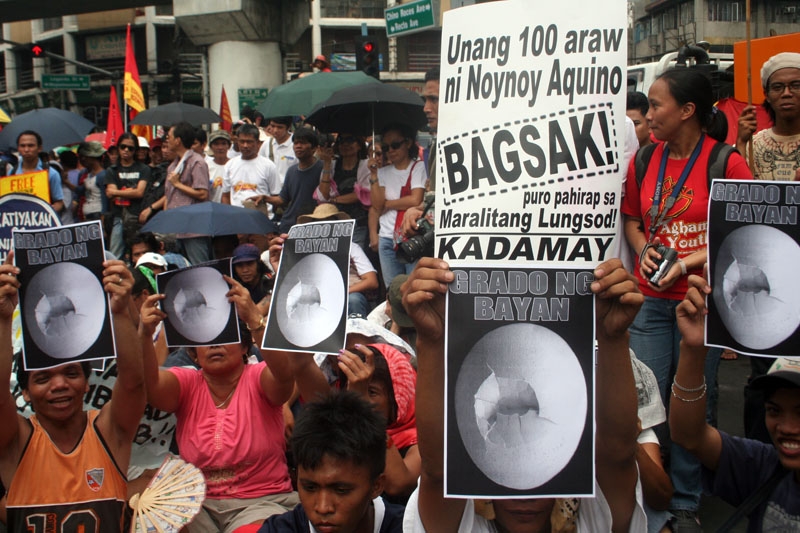 The groups also slammed Aquino’s inaction on the clamor to release political prisoners. “There has been a recommendation to review the case of the Morong 43 in the Department of Justice and yet, they are still languishing in prison for eight months already,” Geneve Rivera, secretary general of the Health Alliance for Democracy (Head) said during the rally.

In his assessment of Aquino’s 100 days, Lito Bais, chairman of the United Luisita Workers Union (Ulwu) said there had been no change.

“During his State of the Nation Address he told those who are listening that ‘You are my boss’…but maybe he meant congressmen who are also landlords and capitalists because he is promoting only their interests,” Bais said.

The land dispute at the Hacienda Luisita remains pending at the Supreme Court. The mediation panel formed by the high court failed to provide a solution to the land problem at the sugar estate owned by Aquino and his family.