The suspension of the toll fee hike in South Luzon Expressway (SLEx) is a “temporary victory of the protests being lodged against it by motorists and the Filipino people,” George San Mateo, secretary general of alliance of drivers and operators Piston said as the Toll Regulatory Board’s (TRB) meeting ended Wednesday October 27 with the deferment of the dreaded toll fee hike.

But it was just a deferment, noted Piston as they wrapped up their picket-protest in front of the office of TRB in Ortigas. Piston urged the Filipino motorists and consumers to “remain vigilant and prepare to launch concerted protest actions when the TRB and the Aquino government eventually forced the implementation of the 250-percent toll fee hike.”

The 250-percent toll fee hike in SLEx has previously been approved by the Toll Regulatory Board early this year, toward the tail-end of the Arroyo government’s rule. It would have begun implementation last June but protests against it had prompted the Supreme Court to issue a temporary restraining order last August 13.

However, after Aquino’s first one hundred days in Malacañang, the Supreme Court lifted the restraining order, citing the private developers’ “right to reasonable profit,” thus paving the way for the implementation of toll fee hikes. Immediately, both the TRB and the private company operating the SLEx announced the impending hike’s implementation early November. 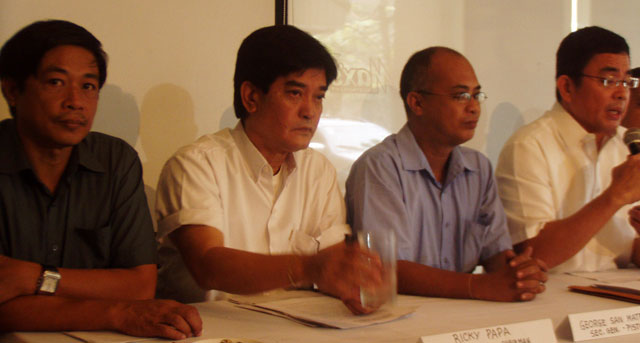 With the 250-percent increase, private passenger vehicles would be paying P2.73 ($0.06) per kilometer over the current 82 centavos ($0.019) per kilometer to the South Luzon Tollways Corp. (SLTC) which holds the 25-year concession on the 30-kilometer SLEx. The SC decision affirming public-private right to “reasonable profit” and the TRB’s role in it also opens the possibility for toll fee hikes in the Skyway to Alabang and in the NLEx in north of Manila.

But in an economy where joblessness persists and incomes remain low, complaints against the looming toll fee hikes coming from varied groups and individuals have threatened to intensify that the Aquino government, after saying it will not block the increases, also began asking the public to “be reasonable” and exercise “sobriety.”

Now the presidential economic council, said DOTC secretary Ping de Jesus in an interview with DZRH, is “leaning more on increasing the toll fees on a staggered basis.”

“Whether they hike the toll fees in increments or in a one-time big-time decision, the effect is the same: most Filipinos stand to suffer from the resulting higher prices of goods and transport fares,” Modesto Floranda, officer of Piston, told Bulatlat. Most critics also dread an even more reduced income of public utility drivers, truckers, small traders and producers, in the event the Aquino government increases the toll fees.

“It will not only deprive an ordinary jeepney driver of his entire day’s earnings, it could even leave him in debt at the end of his long working day,” said George San Mateo during their group’s picket-protest in front of the TRB. He explained that an ordinary jeepney driver earns P300 ($6.97) a day on average, less than the amount the driver would have to cough up to pay the higher toll fees.

The Supreme Court ruling “has long-term adverse economic impact on the welfare” of people in provinces such as Bicol, said Joey Salceda, one of the petitioners against the toll fee hike and an economic adviser to former president Arroyo. Salceda complained that higher toll fees would disadvantage “the small viajeros (traders) who depend on Divisoria trade, or the fish dealers that rely on Navotas, and the ordinary motorists that include students studying in Metro Manila or families visiting their relatives.”

“The cartel will further cut prices of farm gate prices by as much as 50-percent. Because of toll hikes at SLEx; fish traders will further reduce the average of fish price of P50 ($1.16) per kilo to P30 or P25 ($0.697 to $0.58) per kilo,” estimated Fernando Hicap, Pamalakaya national chair. This meant reduced income to farmers and fisherfolks.

Meanwhile, consumers of their products would likely be made to bear with higher prices, warned Hicap. “To ensure fish cartels would have money for toll fees and still make profits, they will jack up prices of fish products by another 10 to 20 percent at the expense of the fish buying and eating public. This is one of negative impacts of the 250 percent increase in SLEx toll hike.”

Prices of products coming from Quezon, Bicol, Mindoro, and other southern provinces will correspondingly increase with the toll fee hike, warned Piston’s Floranda, as small entrepreneurs outside of the cartels would have no choice but recoup their added expenses from consumers.

In the face of growing peoples’ protests, the TRB announced Wednesday that there might be no increase yet this year in toll fees, pending the final and executory Supreme Court decision on the matter and the board’s holding of public hearing. This was in stark contrast to last week’s announcements by TRB spokesman Julius Corpus that there is no more postponement to implementing the increases, and SLTC’s Isaac David that aside from the 250 percent toll hike they would impose early November, another looms by December.