The fare for public utility jeepneys, toll fees of the South and North Luzon Expressways, and water rates have increased, and soon to be followed by an increase in the fare of the MRT and LRT train lines. These are accompanied by weekly increases in the pump prices of oil.

MANILA – Marissa Gonzales, 34, a housewife and mother of four is anticipating that her family’s meager budget would be affected by the one-peso increase ($0.023) in the fare of public utility jeepneys. “Our budget is already insufficient then here comes the increase in transport fare. If we are really the boss, why are we getting poorer?” Gonzales said, referring to President Benigno S. Aquino III’s inaugural speech where he called the people as his boss.

Gonzales joined members of several people’s organizations in a protest action, Feb. 2 at Welcome Rotunda in Quezon City calling on the government to regulate price increases. 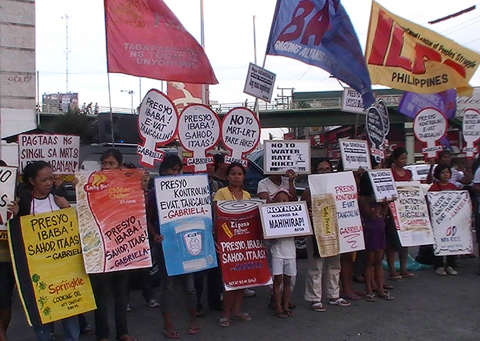 The one-peso increase in fare of public utility jeepneys took effect that day. The South Luzon Toll Ways raised toll fees Feb. 1. On March 1, the fare being charged by the Metro Rail Transit (MRT) and Light Rail Transit (LRT) train lines are expected to go up from 50 to 100 percent. Over the past two months, oil prices have also gone up on a weekly basis, with only one rollback which happened Jan. 31.

Increases in rates of water services would also be implemented starting this month. According to the Water for the People Network (WPN), the Manila Water Co. will charge $.043 per cubic meter on residential customers using at least 30 per cubic meter per month.

The Bagong Alyansang Makabayan (Bayan) slammed the Aquino government for being “callous and insensitive to the people.”

Gonzales said they could hardly survive through selling of vegetables. “Sometime we earn $6.8 for a day. It is not enough especially since we have four kids to feed and send to school.”

She said they only have sardines, fish or dried fish for meals and very seldom do they have meat.

Like Gonzales, Mylene Odias, local organizer of Gabriela in Tatalon, Quezon City, also condemned the increase in prices of goods and reiterated the call for the scrapping of the 12 percent expanded-value added tax (E-VAT)

“If the E-VAT will be scrapped, ordinary citizens like us will be able to afford to buy cooking oil, rice, and other goods,” Odias said during the protest action. 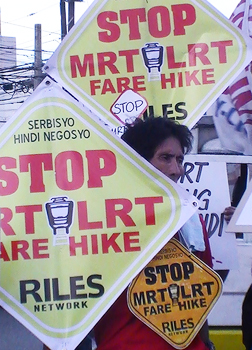 He said the one-peso increase in fare is brought about by the inaction of the government in controlling the oil price hike. “We know that when the price of oil goes up, everything will follow.”

The WPN said the latest water rate hike is unjustifiable. “The private water concessionaires have yet to account for the questionable $22 million they collected from consumers for unimplemented water and sewerage improvement projects.”

The group said consumers were not even informed beforehand, much less consulted, about the water rate hikes approved by the Metropolitan Waterworks and Sewerage System-Regulatory Office (MWSS-RO). 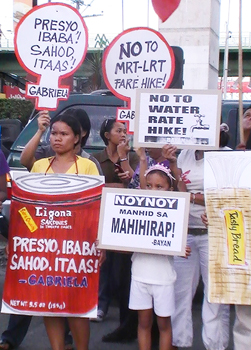 Marissa Gonzales (wearing yellow shirt) and her daughter join the
protest action, calling on the government to put a stop on all
increases. (Photo by Anne Marxze D. Umil / bulatlat.com)

WPN criticized the MWSS-RO’s insensitivity in increasing the rates for water services at a time when the prices of everything else is going up. “The MWSS-RO did not consider the prices of other goods and services such as food, petroleum products, toll fee, transportation fares, etc.” WPN said even if the adjustment was part of the staggered increases implemented by Manila Water and Maynilad for rate hikes approved in 2008, the regulators should still have factored in the spate of price increases.

Despite the increase in water rates, the Manila Water and Maynilad have failed to ensure universal access to water and 24/7 availability of water in their service areas. According to WPN less than 60 percent of 790,000 households in Maynilad’s service area have 24-hour water service while only 74 percent receive water at 7-pound per square inch (PSI) or stronger pressure. More than half (51 percent) of water allocated to Maynilad continues to get wasted because of leaks and pilferage.

It has been eight months since Aquino took over the reins of government but there has been no change for the benefit of the people. Gonzales asked: “If we are his boss, why are all the prices going up?”

Bernadette Andales, 42, also a housewife, lamented: “The straight path he is saying is a big lie.” 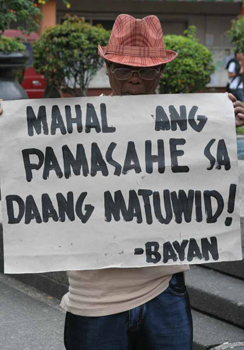 Andales added, “If we are really the boss, why can’t we feel it? He is demolishing urban poor’s houses. If only those relocation sites are not so far from civilization and are free of charge then it is okay with us,” Andales told Bulatlat, referring to Towerville in Bulacan, a relocation site for victims of typhoon Ondoy last September 2009. Most of those who were relocated there have gone back to Tatalon, said Andales.

Meanwhile, a group of government employees also said President Aquino has been turning a deaf ear to their call for increase in salaries. “We have been calling for a $136 increase in our salaries but he is not listening,” Ferdinand Gaite, national chairman of Courage, said.

“All prices are going up but not a single increase in the wage and salaries are being implemented. This will only result to dire poverty of the people,” Gaite added during the protest action.

“The much-vaunted growth in the economy is meaningless for people when price and fees continue to go up and there is no corresponding increase in wages and salaries,” said Renato Reyes Jr., Bayan secretary general.