“Aquino’s ninth month in office coincides with the militant action of Filipino women on March 8. Just like giving birth to a child, the protest of women all over the country and overseas would be born after nine months of discontent over an administration found inadequate in action.” — Lana Linaban, Gabriela secretary-general

“Aquino’s ninth month in office coincides with the militant action of Filipino women on March 8. Just like giving birth to a child, the protest of women all over the country and overseas would be born after nine months of discontent over an administration found inadequate in action,” Lana Linaban, Gabriela secretary-general said.

She added that while Aquino claims economic achievements, the truth is that more Filipino women and their families are impoverished. “Prices of goods and utilities have been soaring and the government has not done any meaningful and decisive intervention.” 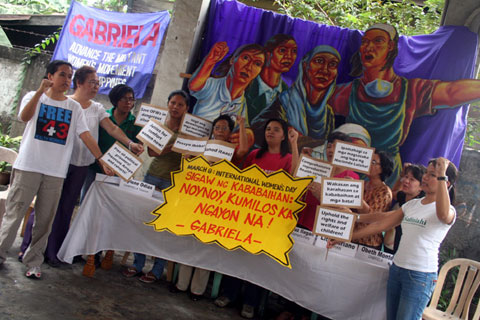 Mylene Obias of Gabriela-Tatalon chapter said the typical budget of $8.06 a day to feed a family of six living in an urban poor community could only buy 2 kilograms of NFA rice, half a kilogram of fish and cooking oil, which would serve as lunch and dinner. “Plus there is transportation fare and snacks for the children going to school. Prices of other basic commodities such as sugar, coffee, milk and utilities like water and electricity increased and these increases have not yet been factored in in the family’s budget.” 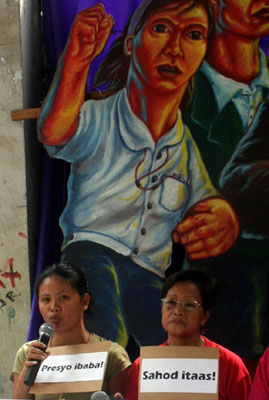 Obias said more and more urban poor families settle with salt as viand for their meals because they could no longer afford to buy basic commodities. “There is a standing joke among community women that goes like this: When a woman asks her husband for money to buy food, her husband would say, ‘Just buy salt, dear,’ because their budget would no longer suffice for their other needs. But this joke is beginning to reflect what is happening in most urban poor families and an increasing number of women are getting angry because they could no longer afford to buy enough food for their family.”

She also said the biggest factor in the high prices of basic commodities is the expanded value added tax (E-vat). “If the E-vat on basic commodities will be removed, it would be a relief. For a $2.3-worth item, there would be a $0.2 savings if there is no e-vat and this could be used to buy charcoal.” 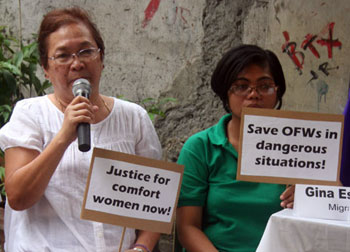 Nenita Gonzaga of Kilusang Mayo Uno said despite the increase in prices of basic commodities, transportation fare and rates of utilities, there is still no significant increase in workers’s wages. “The sufferings being borne by women workers have increased steadily in recent years and also in recent months. There has been no significant hike in our wages for the more than nine years under Gloria Macapagal-Arroyo, while prices have continuously increased to record high-levels during the same period.”

Gabriela vows to gather Filipino women from different walks of life to exercise “women power” in urging President Aquino to act on their immediate demands. The ten demands of women include:

1. Government should intervene to lower prices of food.

Gabriela Women’s Party Representative Luzviminda Ilagan said that, for as long as the government does not enact a law that will provide health care and full access to reproductive health service for women, there would be more and more deaths due to complicated pregnancies.

Amihan spokeswoman Lita Mariano said President Aquino should scrap the Comprehensive Agrarian Reform Law and push for the passage of House Bill 374 or the Genuine Agrarian Reform Bill. “Stop the importation of rice and strengthen local production,” she added. 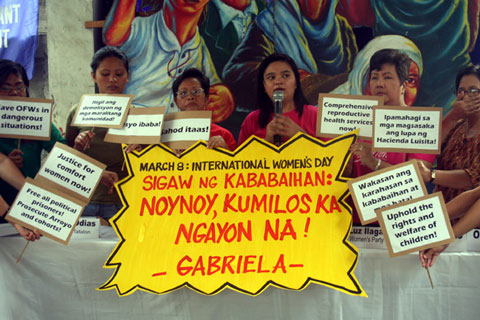 Gabriela’s Linaban said that, despite the moratorium on demolition, there are many communities with pending threats of demolition.

7. Release all political prisoners and prosecute Arroyo and her cohorts.

8. Justice for the comfort women who were victimized by the Japanese military during World War II.

9. Put an end to violence against women and children.

There are more and more women and children who are becoming victims of violence. Gabriela psychologist Obeth Montes said that in 2010, there was one woman victim of violence and one victim of rape in every one hour. Montes said what is alarming is that the victims as well as the perpetrators are getting younger.

10. Promote the rights and welfare of children.

Karla Che Umil of Salinlahi said that during the nine months in power of President Aquino, he has not made any policy pronouncement regarding the protection of children’s rights.

She said there are four million child workers in the streets and in the countryside to help raise money for their families. There are 60,000 to 100,00 prostituted children. Worse, many children in the countryside are being accused of being child soldiers and are victimized by militarization.

“Women are bringing this message to the President: the time for concrete and meaningful action is long overdue. Act now on the urgent demands of women and the people,” Linaban said.

Gabriela said the week leading to March 8 would bear witness to various protest actions and symbolic activities nationwide to drumbeat their demands to the Aquino government.