The labor leader explained that because of the order, rank and file employees have been forced to endure the moratorium and freeze on benefits and other incentives.

“These are the very same rank and file employees whose salaries do not even meet decent living standards. These benefits and other incentives were meant to augment employees’ meager salaries, but now they are frozen,” he said. “The gains achieved through hard bargaining and painstaking struggle in collective negotiations agreements (CNAs) have been severely jeopardized.”

CNAs are to government employees as collective bargaining agreements (CBAs) are to private sector employees. Gaite explained that the CNAs compared to CBAs are very limited because they cannot include salaries and salary adjustments. He said that besides the barrier created by EO 7, CNAs are also being restricted by the issuances, disallowances and other policies of the government and instrumentalities such as the Department of Budget and Management, the CoA, and the Civil Service Commission.

“The benefits in our CNAs and other benefits we fought hard for and have been previously enjoying cannot in any way be construed as being the same as the benefits and perks being enjoyed by the GOCCs and GFIs executives. These benefits are definitely not part of the spoils system and corruption in the bureaucracy being perpetuated only by those who have the means and the power to do so. To conclude the same is most unjust,” Gaite said.

Gaite said they opposed to EO 7 because it is a violation of labor laws that state that there should be no diminution in pay and no prohibitions against worker rights to self-organization and to collective bargaining and negotiations. 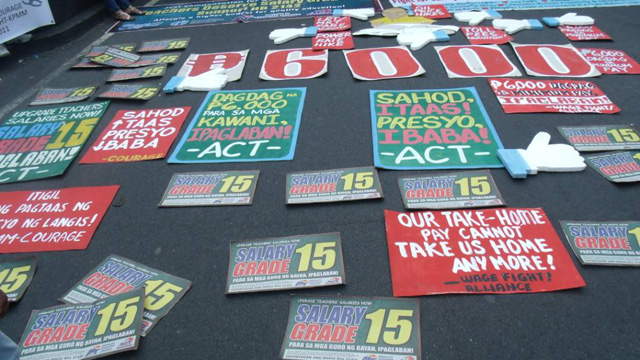 “We refuse to be used as scapegoats. To reason that the rank and file employees are receiving the same benefits as their top officials and board of directors/trustees is to completely miss the point. How can anyone compare what employee receives — a minimum salary of P7,000 (US$163) and let’s say an additional monthly benefit equivalent to his monthly pay with everything amounting to P84,000 (US$1,953) a year — to what a an executive gets: P50,000 a month (US$1,163) and with benefits, totaling at the least P600,000 (US$1,395) a year?”

The labor leader said President Aquino should immediately revoke EO 7 because it is the bane of government employees and unconstitutional.

Heidi Back in the Audit Office

Despite the disgust they feel for what they declare as President Aquino’s indifference to their plight, government employees, however, see a ray of hope in the new appointment of whistle-blower Heidi Mendoza to the Commission on Audit (CoA).

Gaite said Mendoza has shown that she is against corruption in the said agency and that she will not stand for it in any other institution of government. “We’ll have to wait and see if she will remain true to her principles and declarations against corruption,” he said.

Gaite said as a new commissioner of the CoA, Mendoza should start going after big-time officials and ferret out the graft they commit in their offices. He said that through the years, the CoA has become more focused on going after small-time agencies and their executives, but leaving out the bigger offices and the considerably bigger acts of corruption that take place there.