“We occupied the land because it belongs to us. We used the idle land for the benefit of our children,”

TARLAC CITY – “Now, we have something to eat,” Florida Sibayan, 55, a farm worker in Hacienda Luisita, said. “Life is better.”

She, along with hundreds of families inside the more than 6,000 hectare Hacienda Luisita, cultivated parcels of land for palay and vegetables, in defiance of the Cojuango-Aquino clan. Under the stock distribution option (SDO) scheme, farm workers were not allowed to plant palay and other crops, with the vast land devoted only to sugarcane.

The SDO was implemented in Hacienda Luisita, a non-land transfer scheme allowed under the Comprehensive Agrarian Reform Program (CARP), shortly after President Corazon Cojuangco-Aquino rose to power in 1986. Instead of land, stocks were distributed to the farm workers.

Seven years ago, Sibayan only knew hunger and hardships. As stockholders of Hacienda Luisita Inc. (HLI), each of the farm worker was given one day a week to work at the sugar plantation. They earn P9.50 ($0.22) per week, or P38 ($0.88) per month.

This meant starvation for the family. It was this situation that compelled Halili and hundreds of other farm workers to stage a strike in November 2004. On November 16, barely a week since they set up the picketline, policemen and soldiers fired at the farm workers, killing seven and wounding hundreds. 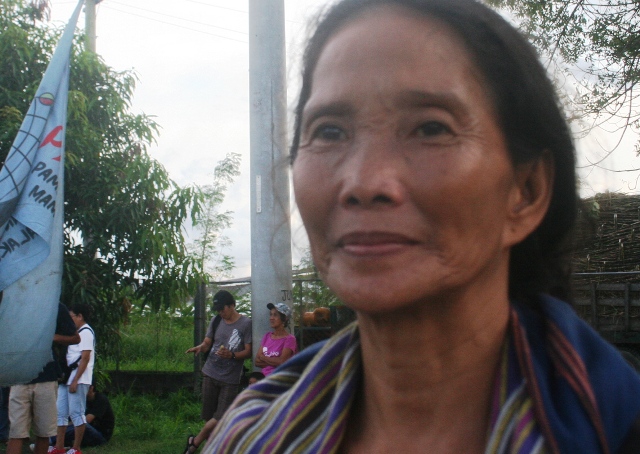 Lioning Halili, 55, vows to continue struggling for the future of her grandchildren.(Photo by Ronalyn V. Olea / bulatlat.com)

After what is now known as the Hacienda Luisita massacre, Halili and the other farm workers joined the bungkalan (cultivation). In 2005, Halili and her family planted palay on a five-hectare land in Cutcut. Sibayan’s family, meanwhile, started cultivating two hectares in Balete subvillage in 2006.

Sibayan said the same. “We never run out of rice,” she said. She and her family harvest 145 sacks of rice every cropping season. “We are now selling vegetables.”

Pastor Gabby Sanchez, 61, father of one of the victims of Hacienda Luisita massacre, also joined the cultivation. “It is but right to regain control of the land because this land was tilled by our ancestors, long before the Cojuango-Aquinos claimed ownership,” he said in Filipino.

Pastor Gabby’s family is one of the 127 families who have cultivated portions of 184-hectare land in Balete subvillage acquired by the Rizal Commercial Banking Corp. (RCBC) through a transaction with the Cojuango-Aquinos.

“We occupied the land because it belongs to us. We used the idle land for the benefit of our children,” Pastor Gabby of the United Church of Christ of the Philippines (UCCP) said.

“RCBC has no legitimate claim of the lands as history has proven that the Cojuangcos did not legitimately own Hacienda Luisita. They should hold the Cojuangcos accountable as this landlord family consciously offered lands that are under clear agrarian dispute,” said Joseph Canlas, chairman of the Alyansa ng Magbubukid sa Gitnang Luson (AMGL).

Before 2004, it was usual for the farm workers of Hacienda Luisita to work in other farms as far as Nueva Ecija or to do odd jobs just to survive.

Because it was next to impossible to sustain her family with P38 ($0.88) per month income from four days of work at the plantation, Halili and her husband found other means to survive. “I borrowed money from a rural bank to set up a small grocery. My husband worked in another farm. Sometimes, he would sell fish, bread or ice drop,” she said.

She was not able to send their five children to college. “They only finished high school. Life was very difficult.”

The same is true for Sibayan. To augment the meager income she got as a stockholder of HLI, Sibayan offered laundry services to well-off families. Sometimes, she would also sell soap and other commodity items. There were days when she would sell sweetened banana.

Some of the farm workers would sell fish for rice, Halili said.

Halili said when they staged the picketline, the Cojuangco-Aquinos warned them they would go hungry. “We could no longer die of hunger, we have long been experiencing hunger,” Halili said.

“For more than 15 years since we became stockholders, we have not received a single centavo as dividend,” Halili said.

Halili was born in Cutcut, San Miguel village, Tarlac. At 14, she started working at the sugar plantation of Hacienda Luisita. Her parents and grandparents were also born there. “They were here even before the Japanese occupation. They were farmers before the Spaniards took over,” she said.