In reaction to Secretary Ricky Carandang’s statement that there is “no practical point” in reopening the investigation as it has already been “resolved,” the relatives of the victims replied, “How could it have been resolved when no one has been punished? Now that the son is in power, all the more we have to press for justice.”

MANILA – When 74-year old Virgina Aribe began to talk about the day her daughter Adelfa was killed, her body shook involuntarily from grief. Tears flowed like a river.

On January 22, 1987, Adelfa, then only 19 years old and fifth of Virginia’s ten children, asked permission from her mother to go to Mendiola, a few meters away from Malacañang, to join a protest action to demand genuine agrarian reform from the administration of Corazon Cojuangco-Aquino.

“Before she left that day, she picked up a bamboo, wrote her name and put it somewhere in the rice field where we used to work,” Virginia said in Filipino in an interview with Bulatlat.com. “I did not know it was her way of saying goodbye.”

Adelfa was one of the 13 farmers who were killed when policemen and soldiers opened fire at the protesters.

“Cory promised us she would do something to help us achieve justice. We have been waiting, but up to her death, she had done nothing,” Virginia said. A few days after the massacre, Virginia, along with relatives of other victims, went to Malacañang to talk to Mrs. Aquino. Twenty five years hence, no one has been held responsible for the carnage. 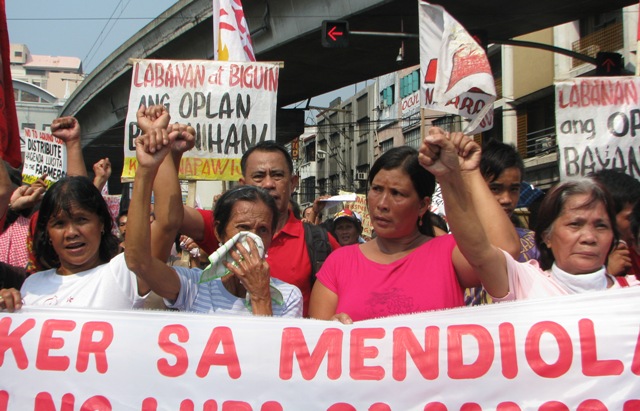 A day after the massacre, Mrs. Aquino ordered the creation of the Citizens’ Mendiola Commission headed by retired Supreme Court Justice Pedro Abad Santos, according to Philstar.com’s timeline of the massacre.

In March 1987, the commission recommended the filing of criminal charges against all armed military and police officers on duty when the massacre took place. It also recommended compensation for the victims.

The following month, the House Committee on Human Rights recommended the expeditious payment of compensation to the victims.

In May of the same year, the Manila regional trial court dismissed the class suit. The petitioners filed a motion for reconsideration but were denied, with the court citing that the State did not file a waiver of immunity from suit.

Twenty five years later, with Mrs. Aquino’s son, Benigno III, now the president, Adelfa went back to Mendiola (now Chino Roces) bridge to demand, for the nth time, for justice for victims of the Mendiola massacre.

“I only want justice,” Virginia told the crowd in a rally marking the 25th anniversary of the Mendiola massacre, January 20. “Noynoy, listen to us,” she shouted.

The old and petite peasant woman travelled all the way from her son’s home in Liliw, Laguna. With her were three widows of the Mendiola massacre victims.

When Josephine Dumanico, 42, lost her husband Ronilo, their two children were only two years old and one year old. “I did not know what to do then,” Josephine told Bulatlat.com.

On that fateful day, Purita Yumul, 56, was also at Mendiola. She survived but her husband Roberto was not as fortunate.

Teresita Arjona, 43, was separated from her husband Danilo when the firing began. She only learned that Danilo was gone when she got home, hours after the massacre happened.

Contrary to recommendations of the Mendiola Commission and the House Committee on Human Rights, the widows and hundreds of survivors did not receive any compensation from government.

The three women worked hard to feed their children. They worked in the fields, did laundry, sold vegetables and other goods, among others.

“If I did not work, how else would I be able to feed my children?” Josephine said.

“The day he was gone was the start of many years of hardships,” Teresita said.

Like Virginia, they joined the rally led by Kilusang Magbubukid ng Pilipinas (KMP) to demand for justice.

On January 22 last year, Teresita joined leaders of KMP in filing a petition before the Department of Justice (DOJ) seeking the reinvestigation of the case.

“Until now, there has been no development,” Teresita said. 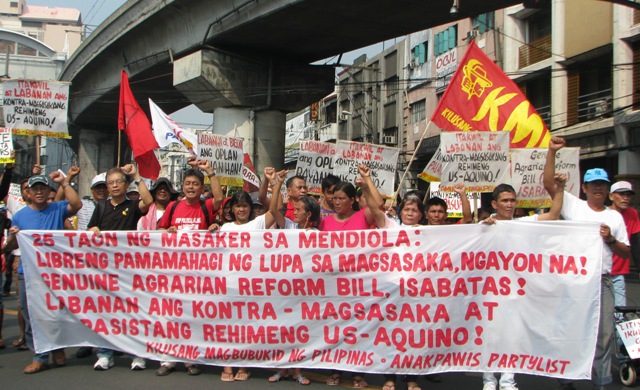 Relatives of the victims of Mendiola massacre and peasant leaders call for justice and genuine agrarian reform in a rally, Jan. 20.(Photo by Ronalyn V. Olea / bulatlat.com)

After the filing of the petition last year, Communications and Strategic Planning Secretary Ricky Carandang said Malacañang doesn’t see any need to reopen the case. He said there is “no practical point” in reopening the investigation as it has already been “resolved.”

“How could it have been resolved when no one has been punished?” Purita said. “Now that the son is in power, all the more we have to press for justice.”

“Charges must be filed against the perpetrators,” Teresita said.

Ramos said, “After 25 years, the perpetrators of the Mendiola Massacre could no longer invoke state immunity from suit.”

Anakpawis Rep. Rafael Mariano said that to render justice, the Aquino administration must heed the recommendations of the Mendiola Commission, particularly the filing of appropriate charges against those involved.

“The Mendiola massacre happened during Cory’s time. The Cojuangco-Aquinos are liable too for the Hacienda Luisita massacre,” Mariano said.

“After Cory, the succeeding administrations were allies of the Cojuangco-Aquinos. All of them were political representatives of the haciendero-comprador (landlord-big business) class,” Mariano said, explaining why justice has evaded peasant victims over the years.

“What can we expect from Noynoy? We should rely on the peasant movement to obtain justice and to achieve genuine agrarian reform,” Mariano said.

For Virginia and the other relatives of the victims, the fight goes on. Except for Purita, the continuing injustice Virginia, Teresita and Josephine and their children have been suffering does not emanate from the unresolved Mendiola massacre alone, they belong to the millions of Filipino peasants who continue to yearn for genuine land reform.