“Before the mining started, the environment was pristine. We lived on farming, and the harvest was plentiful. Now, when it rains, red water rises.”

In the past six years, some residents of Guisguis village in Sta. Cruz town were able to buy motorcycles, as well as to improve the structure of their houses. Residents called it “katas ng mina” (fruit of the mines), as those who could afford were the few employed by the mining companies operating in the village.

But this is just a drop in the bucket compared to the toll that the mining operations had exacted on the environment, and consequently, on the health, livelihood and safety of the villagers. This was the finding in a report of the Movement for the Protection of the Environment (Move Now!), the alliance of environment advocates in Zambales, which also voiced out the people’s sentiments calling for a stop to mining operations in the area.

From March 12 to 13, a fact-finding mission led by Move Now! gathered stories from residents in the villages of Guisguis, Canaynayan, Guinabon and Lomboy in Sta. Cruz. The report reflected the villagers’ collective grief about the ongoing environmental destruction and looming threat of disaster brought about by the mining operations in the mineral-rich Zambales mountain range.

“Before the mining started, the environment was pristine. We lived on farming, and the harvest was plentiful. Now, when it rains, red water rises,” a woman from Canaynayan described life before the mining companies came.

Villagers blame farm losses and rising flood waters to the mining operations that had gradually carved out forest cover and mountains in Sta. Cruz. Loosened soil of red-orange hue and laden with minerals slide down and clog the waterways. When it rains, silted water spills out into the irrigation system and rice farms. 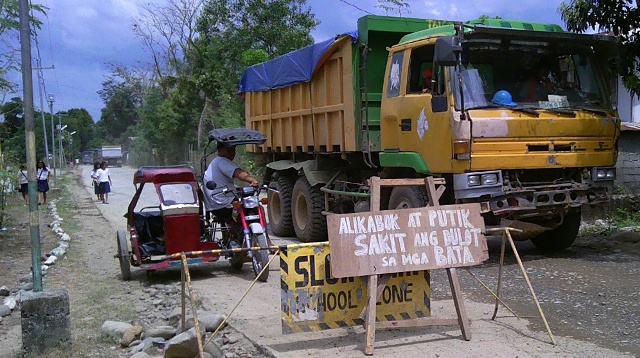 Residents have put up a sign in front of the public grade school in Canaynayan, Sta. Cruz, Zambales expressing their opposition to mining.(Photo by Dee Ayroso/ bulatlat.com)

The companies employ open-pit mining to extract nickel and chromite ores, which are then hauled to waiting barges in a wharf in another village.

Red dust in the wind

On the rutted road leading to the communities at the foot of the mining area, one gets a good powdering of dust, a sample of the mountain soil loosened by the extractive operations. Dust hovers along the whole length of the furrowed dirt road, as dump trucks go to and from the mining site, at the rate of three trucks per five minutes. Following barangay regulation, they stop only at 9 p.m. and resume their noisy, thundering trips from 4 a.m., waking people up before they intend to.

Children and adults alike suffer from chronic coughs, runny nose, itchy eyes and throats, skin irritation and respiratory ailments which they suspect to be caused by the possibly nickel-laden dust. 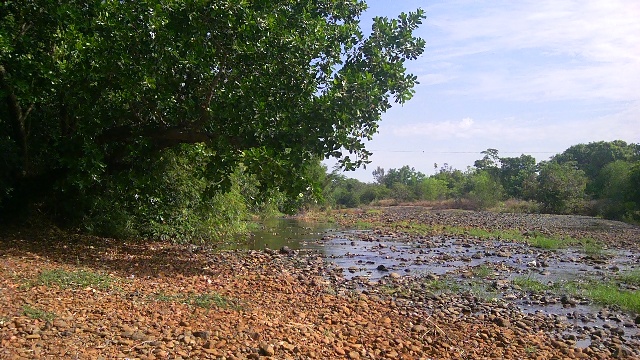 The once flowing river in Guisguis is now shallow and stagnant.(Photo by Dee Ayroso/ bulatlat.com)

In front of the Canaynayan Elementary School, teachers by way of protest had put up two signs saying: “The future is bright, if the environment is not destroyed; Dust and mud, the cause of children’s illness.”

The flowing river and creeks where villagers used to bathe and wash their laundry is now stagnant, with orange-red water. Gone are the shrimp, and most fishes which used to be in abundant supply. Residents have no interest to catch, let alone eat, the surviving tilapia and other fish, which they said have infected scales.

A farmer from Lomboy described how the siltation from the mined-out mountains affects the waterways and rice fields below: “When you irrigate your farm while the water is red, when it dries up, the soil hardens, like cement.”

The rice plant is stunted, its stems wedged stiff in the soil. Applying fertilizer would have no effect on the plant.
Even carabaos starve when the silted waters overflow into the pasture areas. Farmers wait for rains to wash away the silt from the grass before letting the animals feed.

It’s not just our livelihood that is at stake, but our very lives,” said a Lomboy resident.

The fact-finding team also documented cases of human rights violations which happened in 2006, when the mining started. Soldiers of the 24th Infantry Battalion who conducted military operations assaulted residents in sitio Sto. Niño, Guisguis and Lomboy, not sparing even the barangay council officials in Lomboy.

One former Lomboy councilor can no longer walk as a result of the mauling by soldiers in 2006. A soldier hit him in the spine with the barrel of an M16 armalite rifle.

Today, it is the private security guards of mining companies who keep watch around the mining area. Village folk are banned from getting their supply of lumber and other forest products from the mountains. The fact-finding mission learned about incidents when the villagers who brought down logs for house construction were held at a checkpoint, where they were ordered to leave the logs behind.

Flood waters used to rise only up to shin level, and occurred only once a year. Now, with no more trees in the mountains, the floods come more often, faster and higher. “Before, we used to sleep soundly because of the rains. But now, just a few hours of rain and we’re anxious about where to evacuate,” a Canaynayan farmer said. In the 2009 flooding, his house collapsed amid rushing flood waters, and his crops were washed out. His family had to evacuate to higher ground every time the floods come.

The fact-finding team also interviewed several women in Guisguis whose husbands work for the mining companies. They said their spouses earn P 370 ($9) for eight hours of work, more than double the P150 ($3.65) a day they used to earn as farm workers during planting and harvesting season. Their spouses are among the 300 residents employed by mining companies, out of the total 3,500 registered voters in Guisguis.
Yet, these women are among the village folks who want the mining to stop. The mining companies should heed the lesson of the flashfloods in Leyte and in Mindanao, they said.

“What good would it do to build a big house, if it will all be gone?” one woman said. “We can do without the mines),” she said.
Indeed, everyone can do without mining of the damaging kind. Calling the mining in Zambales “a plunder of our national patrimony,” the regional peasant group AMGL supported the villagers’ call.

“Mining in Zambales is not only an issue of (the province) and the region, but also of the entire country,” said AMGL chair Joseph Canlas.
The report by Move Now! also cited other communities in Zambales that are threatened by the environmental destruction by mining companies extracting magnetite, copper and gold.

“We have nothing to hope from the Aquino government as the president is a promoter of mining in the country. We call on the people, direct and indirect victims of mining in Zambales to unite and struggle against it,” said Canlas.

*Dee Ayroso was a member of the Move Now! fact-finding mission team.