MANILA – December is a season of giving, but not for government employees.
Public school teachers marched to Chino Roces Bridger (former Mendiola Bridge), December 14 to in protest of the 50-percent reduction of their Productivity Enhancement Incentive (PEI).

“It’s as if it’s not Christmas,” said Digna Balderama, 45, a single mother to three children. The Department of Budget and Management recently announced public school teachers would receive P5,000 ($121) as PEI, instead of the usual rate of P10,000 ($243).

Balderama, a grade one teacher at the San Francisco Elementary School in Quezon City, lamented: “Our salary is not even increasing and then the government will reduce our benefits.”

Carrying their black lantern with slogans “PEI P10,000, not P5,000. Junk Aquino’s PBB [Performance- based Bonus],” Baldemara and other teachers from different public schools in Quezon City, Manila and other parts of the country joined the nationally-coordinated black lantern protest march. 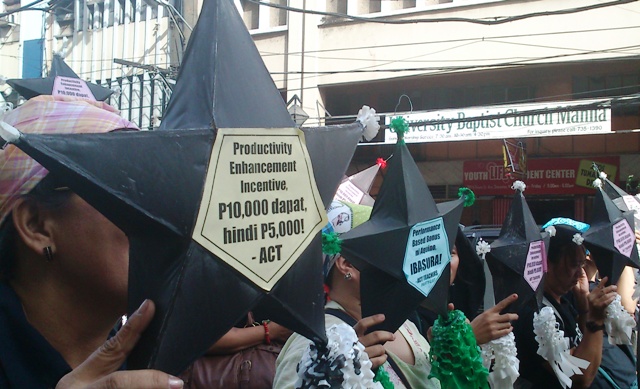 Benjamin Valbuena, chairman of the Alliance of Concerned Teachers (ACT) said that the reduction of their PEI has angered teachers. For the past ten years, teachers had been receiving the PEI of P10,000. Valbuena said the reduction of the PEI will greatly affects teachers as many of them are buried in debt.

France Castro, secretary general of ACT and second nominee of ACT Teachers Party, meanwhile, argued that the funds for PBB should not be deducted from their PEI since there is an allocated budget for the said bonuses for December 2013. “There is an allocation of P9 billion ($370 million) in the 2013 General Appropriations Act for the PBB. So why deduct half of our PEI for PBB? It is just so vague,” Castro said pointing out that PBB is yet to be implemented in 2013.

Under the EO 80, government employees who belong to a government agency that will be ranked as “best” in performance will receive bonus. The PBB will range from P5,000 to P35,000 ($875).

According to the EO, when a government office will be ranked as the “best bureau,” P35,000 will be given to the best performer, P20,00 for better performer, and P10,000 for good performer. 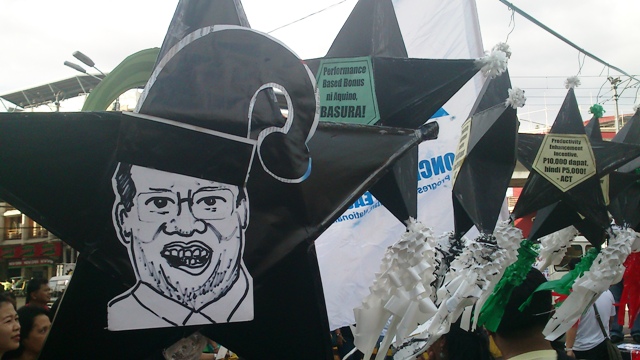 “For the Department of Education (DepEd) to be ranked as best agency is like a punch in the moon,” said Maximo Obaldo, also a teacher from San Francisco Elementary School.

“Our performance will be based on the performance of our students. All the blame is on us when the students are not doing well in school; Especially now that Quezon City got low scores in National Achievement Tests, all the more that we are not going to be ranked as best,” Obaldo lamented.

Abad said the PBB hopes to “encourage better work performance in the bureaucracy.”

But ACT begged to disagree, saying the PBB is deceptive and divisive. “Instead of encouraging cooperation and unity among co-employees, this will trigger competition and eventually divisiveness. It will also breed ‘palakasan’ and ‘sipsipan’ system.”

“The evaluation of our performance rests on the hands of our superiors and there is a great possibility that their judgment of our work may be arbitrary or subjective. This will then affect the amount of ‘bonus’ which we will receive. There will no more be across-the-board salary increase. Even the salary standardization law will be removed,” Valbuena pointed out.

Also among the criteria for an agency to have PBB is when it meets the target under the five Key Result Areas and the Philippine Development Plan, 2011-2016.

“The PBB shall be given to personnel of bureaus or delivery units in accordance with their contribution to the accomplishment of their Department’s overall targets and commitments subject to the criteria and conditions,” the EO read.

Castro lambasted the said criteria. She said that the said scheme further intensifies corporatization being implemented by Aquino administration.
In a position paper, ACT and All-UP Workers Alliance said that teachers, non-teaching personnel, health workers and other government employees are giving public service and not income.

The groups said that among the “targets” that the government agency should meet is the internally generated income that will push for government agencies like schools, state universities and colleges, and public hospitals to increase fees to their services. “This is part of the corporatization implemented by the Aquino regime dictated by neoliberal globalization,” the position paper read.

“Given all these aspects, ACT calls on all teaching and non-teaching personnel to join us in our continuous fight for higher salaries and wages. Let us ask that PBB be junked. Let us expose and oppose the privatization and corporatization of government agencies and services which are dictates of the neoliberal policy of globalization,” Valbuena said.