A threat to life and the environment; a green light to more human rights violations; a case of bullying by the national government on the local government, which banned open pit mining; and most likely, a case of high-stakes corruption. This is how progressive groups describe the granting of an ECC to SMI-Xstrata.

MANILA — “Our fellow Filipinos in Mindanao have yet to recover from the destruction wreaked by typhoon Pablo and yet, here comes the Aquino government foisting further destruction on their lives,” Kabataan Partylist Raymond Palatino said in a speech before a group of protesters Thursday February 21. They were gathered in front of the Department of Environment and Natural Resources (DENR). Minutes before, the police had tried to break their ranks, grabbed one of the peasant leaders and tried to drag him into the gates of the DENR. The protesters rescued the peasant leader and tried to reason with the police, but some showed Bulatlat.com the marks of police truncheon’s beatings.

After the members of the Philippine National Police calmed down, the protesters proceeded to hold a program to air the reasons why the DENR is making a big mistake in releasing an Environmental Compliance Certificate (ECC) to the mining project of SMI-Xstrata in Mindanao. The early violence of the police, they said, was an example of the injustices the proposed mining site is unleashing on Filipinos.

Police try to drag away from other protesters Tunying Flores (in red), spokesman of KMP, Feb 21, DENR, QC (Photos by Jhun Dantes / bulatlat.com)

The protesters are urging the DENR to revoke the ECC it issued this week to Xstrata-controlled Sagittarius Mines Inc.’s copper-gold mining in Tampakan. The release of this ECC (Environmental Compliance Certificate) to SMI is highly controversial. The mining operation it is giving the go-signal to has for years been widely and violently opposed at the project site.

People especially from the Blaan tribe have been killed while fighting the mining company. There is also a provincial legislation specifically barring open-pit mining. The DENR had twice refused to issue an ECC on the basis of these local legislation and widespread opposition.

But last week, Malacañang reportedly leaned heavily on the DENR to compel it to issue the ECC. With it, the nearly $6-billion mining project could start commercial operations in the near future. Once it does, it is poised to be the biggest mining project in the Philippines. But it also threatens to cause genocide as well as environmental degradation, according to critics.

Based on statements of various groups, the approved commercial operations of SMI-Xstrata is a huge “threat to life and the environment,” a “green light to more human rights violations”, a case of “bullying” by the national government and huge mining TNCs against local government and, most likely, a case as well of high-stakes corruption. All these are happening under a regime that brags of “tuwid na daan” and helping Filipinos to be able to dream again.

The umbrella group Bagong Alyansang Makabayan (Bayan) accused the Aquino regime of conniving with huge mining firms in the Mining Industry Coordinating Council (MICC). Bayan said it had maneuvered for the granting of the ECC. “Aquino has mobilized his economic and legal teams to provide all the possible support for the continuation of the billion-dollar project,” Renato Reyes Jr., Secretary General of Bayan, said in a statement.

Aquino formed the MICC according to his new mining policy, Executive Order 79, which is supposed to be a harbinger of mining reforms. Given how it is being used now to thwart the decision of local government and the population, this so-called mining reform is now even more criticized as a “sham.” Bayan described it more as a “perpetuation of existing anti-people mining policies.” Last year, the mining EO was greeted with criticisms that it was only trying to lull protesters with “elegant language,” but in reality, it serves to worsen rather than correct the hated provisions of the Mining Act of 1995.

“This regime values the promise of foreign investments over the welfare of the people and the protection of the environment. It deceives the people into thinking that an extractive operation such as the one planned by SMI-Xstrata will lead to actual economic benefits when all they would be doing is leveling mountains and bringing our natural resources out of the country,” Reyes said.

Studies of environmental experts from AGHAM (Advocates of Science and Technology for the People) reveal that mining Tampakan especially through an open-pit method would result in an environmental catastrophe.

The granting of the ECC became all the more questionable considering that an uncle of President Aquino is a shareholder in SMI, according to Bayan. They cited reports that Sagittarius Mines is partly owned by Indophil Resources NL where Danding Cojuangco’s San Miguel Corporation has a 10-percent stake. 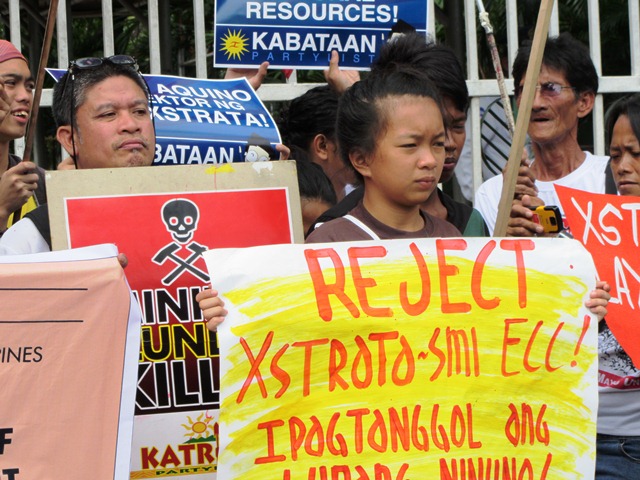 Given the DENR’s fast approval of the ECC required by SMI to commercially operate, Palatino of Kabataan Partylist asked: “How much is now in the bank accounts of the government’s top executives, the Aquino cabinet?”

Profits for SMI-Xstrata, catastrophe for Filipinos

SMI-Xstrata has reportedly already spent more than P10 billion ($250 million) for the permit and licensing stage of their mining project. A month ago, it said it is set to spend more than $5.9 billion for the mining operations.

The returns are significant, as its main mine site in Tampakan, South Cotabato is estimated to produce 15 million tons of copper and 17.6 million ounces of gold. Xstrata is the world’s fourth largest producer of copper.

But “Mining in Tampakan will hit a critical watershed that supplies water for domestic use and irrigation in southern Mindanao,” said Ma. Finesa Cosico, environmental expert from AGHAM or Advocates of Science and Technology for the People. Allowing SMI to mine Tampakan, she said, means abandoning government responsibility to ensure clean and safe water for the people.

The 9,460-hectare mining tenement is reportedly bordered by two mountain ecosystems. The first, Mt. Matutum, is a protected landscape that supplies 25-percent of the water needs of municipalities in South Cotabato, Sarangani and General Santos City. The second, Mt. Bololomot, has been declared as an environmentally critical area and serves as head water of one of the region’s sub-basins, the Dalui River, and flows into Mal River that irrigates three South Cotabato south Cotabato municipalities.

Mining would affect the ground water with the likely occurrence of erosion and sedimentation, formation of acid mine drainage, heavy metal contamination, chemical pollution and leaching, according to the findings of a 2010 environmental investigative mission conducted by the concerned groups.

“SMI will employ open-pit mining and this will definitely result to massive deforestation and pollution,” said Frances Quimpo, executive director of Center for Environmental Concerns, in a statement. She warned that an “environmentally critical project in such an area spells disaster and must be averted by the government, by canceling SMI’s ECC.”

Ironically, about this time of the week that the Aquino government awarded SMI-Xstrata the ECC, the congressional on-site hearing on the case of the Capion massacre also began.

“The President’s move sends a clear signal to the foreign mining corporation to continue the violations of human rights in the community which are the cause of conflict in the once peaceful village,” said Marie Hilao-Enriquez, chair of Karapatan in a media conference in General Santos Thursday.

The latest evacuation of Blaan families and the killing of another Capion, Kitari, (3 other members of the family were fired at four months ago), are proof of impunity by the Aquino government, SMI-Xstrata, through the Armed Forces of the Philippines, in this case, the Task Force Kitacom, Hilao-Enriquez said.

Karapatan reported that four months after the massacre of two-month pregnant Juvy Capion and her two sons last October, 2012, military operations in the community continued. It was interrupted only for a few days, they said, when the military announced that members of its 27th IBPA were contained in their headquarters and replaced by the 39th IBPA. That was just “for how,” said Karapatan.
The replacement unit is also known for human rights violations, the group said, as it accused its members of having killed father and son Rudy and Rudyric Dejos in Sta. Cruz, Davao del Sur in 2011.