“Forming local task forces every time a journalist is killed is hardly comprehensive action to address a larger problem of weak law enforcement and a tolerated culture of impunity.” – Bayan Muna

MANILA — Three journalists have been killed in the past two weeks and another survived an attempt on his life.

On Dec. 10, radio reporter Jhonavin Villalba, 43, of dyOK Aksyon Radyo Iloilo was shot by unidentified assailants. He sustained gunshot wounds in his toe and ankle, according to the Iloilo chapter of the National Union of Journalists of the Philippines (NUJP). 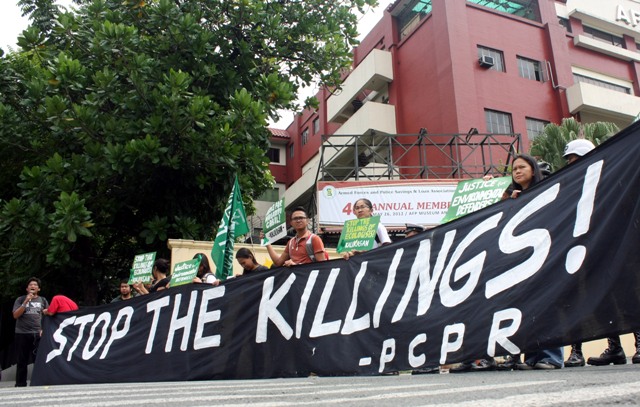 Human Rights Watch dubbed the attacks as “no less than a war against the media.”

The human rights watchdog noted that the recent attacks have raised to 12 the number of journalists killed so far in 2013. Altogether, some 26 journalists have been killed in the first 40 months of the administration of President Benigno Aquino III, and no one has been successfully prosecuted in any of these cases, HRW added.

According to NUJP, on the average, six journalists were killed per year under President Benigno Aquino III’s term.

HRW criticized the Aquino administration’s response to these killings. “While officials say the government is committed to ending impunity for these attacks, they have nevertheless sought to downplay them,” HRW said in its dispatch.

In his statement, Nov. 22, presidential spokesman Herminio Coloma Jr. said the problem of media killings in the country seems to be “not so serious.”

“Such official inaction is unacceptable. The Aquino administration needs to declare that the attacks on journalists are a national catastrophe that threatens fundamental liberties,” Carlos Conde of HRW said.

“It’s time for the Philippine government to intervene in the war on the press rather than ignore it,” Conde said further.

At the Lower House, Bayan Muna representatives Neri Javier Colmenares and Carlos Isagani Zarate filed a resolution condemning the continuing media killings and urging Aquino to carry out comprehensive and concrete actions to bring the perpetrators before the bar of justice.

House resolution 526 partly read,”… forming local task forces every time a journalist is killed is hardly comprehensive action to address a larger problem of weak law enforcement and a tolerated culture of impunity.”

Citing statistics from the New York-based Committee to Protect Journalists, the resolution states that 71 percent of suspected “source of fire” in murder cases are government officials.

“It is no wonder then that gunmen have the audacity to kill in broad daylight, when they are protected or even paid by those in power,” the resolution states.