You Are Here: Home → 2014 → April → 6 → Yolanda survivors depict their sufferings under Aquino administation

MANILA — Uttering in Filipino, “Hail Aquino you are oppressing us, you are killing us, you turned your back on us,” a play on the prayer Hail Mary, members of People Surge and supporters held a cenaculo-inspired procession to Times street in Quezon City, the ancestral home of President Benigno Simeon Aquino III.

The Philippines is predominantly Catholic and cenaculo, usually performed during the Lenten season, is a play depicting the life, sufferings and death of Jesus Christ.

As the procession proceeded, those portraying the five government officials took turns whipping and kicking at the survivor carrying the cross. Behind them, women in black mourning veil, carrying crosses, were praying loudly for the government to listen to the petition of Yolanda survivors.

They failed to turn left, however, toward the residence of Aquino, as they were barred by interlocked steel barriers, three police vehicles from the National Capital Region, and numerous security guards and policemen. Some of the security guards shared their drinking water with the protesters, but they still did not remove the roadblock.

The barrier forced the marchers to conduct a program instead at the intersection of Times st. and Examiner st.

Joel Abaño, a member of People Surge from Leyte, said that instead of finding help, the government is “making things even harder for them.”

Eastern Visayas is poorer after Yolanda. After their main crops consisting of coconut and some roots for food were washed out by Yolanda, and with little to no agricultural subsidy that could help them rehabilitate agriculture, their main sources of livelihood, Abaño said their people are now lacking in food. Even the 58-year old farmer from Samar who was carrying the yellow cross and wearing a crown of thorns told Bulatlat.com that his family’s coconuts had died due to Yolanda, and they have no way of replacing all of it now as the family struggles just to subsist.

Amid the suffering and challenges to survival of Yolanda victims, what has the government been doing? Abaño asked during the program.

“They’re like playing a basketball game — they’re fond of passing the blame. But we continue to demand those donations and relief that were sent for us,” said Abaño.

People Surge reiterated the rest of their demands for genuine rehabilitation.

Adding burden rather than help

What hurts the typhoon survivors in Eastern Visayas is the fact that the government is doing worse than just inaction regarding the Yolanda victims’ needs – “the Aquino government is adding even more burden to what we’re already suffering after Yolanda,” Abaño said.

The statement of People Surge and their leaders who spoke at a brief program at Times St. decried the “Gang of Five,” referring to Aquino, Soliman, Roxas, Petilla, Lacson, who they say came to Eastern Visayas not to help the survivors but to grab their lands. Under the Aquino government’s supposed rehabilitation plan, Abaño said “they distributed our lands to rich businessmen like Danding Cojuangco, Henry Sy, Lucio Tan, Manny Pangilinan and other cronies who play guns with the inutile president.”

Five months after Yolanda ravaged their land and their livelihood and killed probably 10,000 people, “nothing is happening for us,” the survivors said.

Eric Labagala, 60, a member of People Surge from Samar, reiterated the common expectations that the government is supposed to help the survivors, as it is the government’s duty.

Instead, Soliman allowed the donated food to rot, hastily burying it so as not to be criticized for her selfishness, Labagala said. 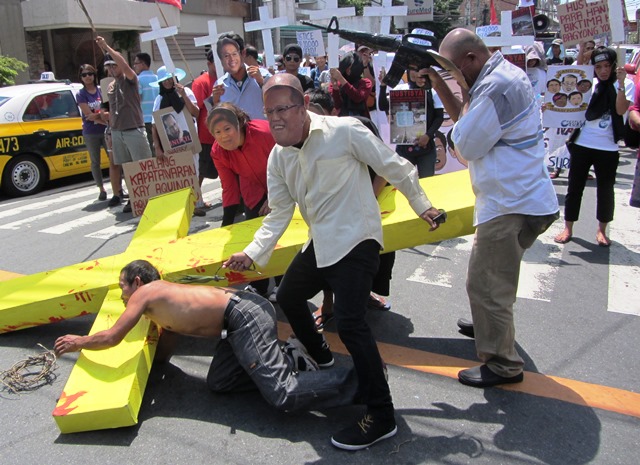 “Roxas built houses fit only for doves, and full of issues of corruption at that. Petilla did not give light but made us spend Christmas in the dark. When finally we get back our electricity, we are told we will be charged higher,” Labagala said during the procession.

He continued that “Ping Lacson is threatening the families of the 17,585 who signed the People Surge petition that they would withhold relief.”

Worse, according to Marissa Cabalijao of People Surge-Samar, soldiers from the state military are now hunting for the family members of those who signed the petition, especially those who are joining rallies and protest actions against the Aquino government’s flawed rehabilitation.

We have gone through typhoon Yolanda, but we can’t bear typhoon Noynoy, Labagala said.

“We are typhoon survivors, not beggars,” the People Surge statement reads. They expressed apprehension that they would be pushed even deeper into poverty because the way things are shaping up as “rehabilitation” under the Aquino government, 80 percent of the budget are earmarked for infrastructure when majority of the people need aid in agriculture.

Much of the 2013 unspent funds from the Priority Development Assistance Fund (PDAF) of more than P14 billion were earmarked for relief and rehabilitation and disaster concerns, but under the discretion of Aquino. In this year’s budget, aside from the increases in budgets of, say, the Department of Social Welfare and Development, there are also unprogrammed lump sum funds of more than P100 billion for disaster issues, relief and rehabilitation. Yet, the People Surge repeatedly reported they did not feel these funds helping them.

In fact, the budget allotment for the regions lashed by Yolanda is the lowest compared to other regions. Visayas gets only 18 percent in the regionalized portion of the 2014 budget when it was still being proposed (despite Yolanda).

The typhoon survivors said they cannot be expected to get back on their feet if all livelihood-related aid is in “cosmetic” temporary and limited cash-for-work program. They reiterated also their condemnation of the “hypocritical No-Build Zone” that they say means eviction of former residents to give way to rich businessmen raring to take over their coastal addresses.

“If the Aquino government is indeed worried only of our safety, how come they are allowing big business and foreign investors to construct infrastructures right where our loved ones died during Yolanda? Why are the mining and logging operations in farflung areas lashed by Yolanda still continuing?” the People Surge asked in a statement.

On April 8, the survivors of Yolanda and supporters in the Philippines and abroad are set to conduct a day of protest. In a statement, Benedictine nun Edita Eslopor asked the public to write the offices of each of the “Gang of Five,” telling them of public support to the petition submitted by the Yolanda survivors last February. 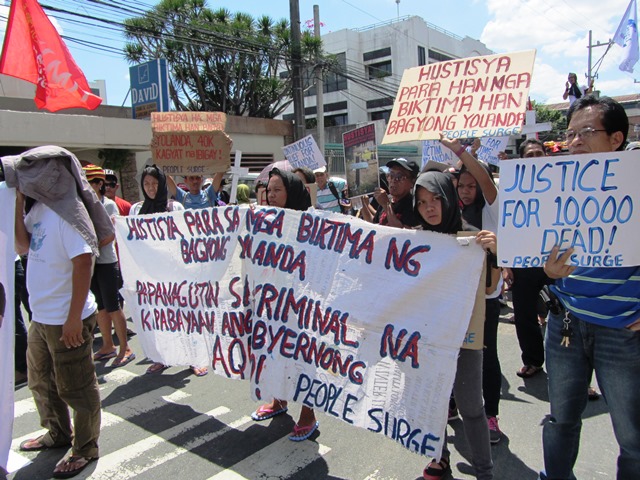 She also urged the public to help them press Aquino to answer to and release the donations sent by relatives, friends and other helping hands from abroad. Eslopor also requested support for their rally at Mendiola Bridge near Malacañang on April 8.

At the very least, she asked the public to join their ongoing “black ribbon for justice campaign”, as she invited everyone to be a member of People Surge through Facebook page (facebook.com/peoplesurge). She asked the public to show their support of the survivors’ campaign for justice from the government’s criminal negligence through messages in radio, TV, newspapers, text or SMS and various social media.