MANILA – When former President Gloria Macapagal-Arroyo was getting one of her lowest popularity ratings amid another scandal during her time, she dressed in virginal blue and told the country “I’m sorry.” Now when the popularity of President Benigno “Noynoy” Aquino III is also slipping, he delivered what commentators said as his most emotional State of the Nation Address (SONA) yet, complete with voice breaking at certain points and the TV cameras panning to his glamorous sisters dabbing at their eyes. He reminded the public again about his parents, former senator Ninoy Aquino and former President Corazon Cojuangco-Aquino.

Inside Congress members of his Cabinet and some lawmakers wore the yellow ribbon he asked his supporters to wear. But inside Congress and outside, the Makabayan bloc of legislators and members of various groups wore peach, for Impeach Aquino, or black, white, red, blue. Bayan Muna Partylist Rep. Neri Colmenares told a reporter, when asked about the yellow ribbon worn by Cabinet members and leaders of Congress, that what’s important is that the people outside are not wearing that.

A few kilometers from the House of Representatives were signs of what Bagong Alyansang Makabayan described as “overkill” security preparations against the Sonang Bayan (Peoples’ Sona). As much as 10,000 members of the Philippine National Police and truckloads of soldiers were deployed along the length of Commonwealth Avenue from Philcoa to Sandiganbayan and along Batasan Road.

The Aquino government “garrisoned” the area, dividing the country’s widest avenue with coils of razorwire, heavy duty steel and concrete fences and columns of armored policemen and policewomen. 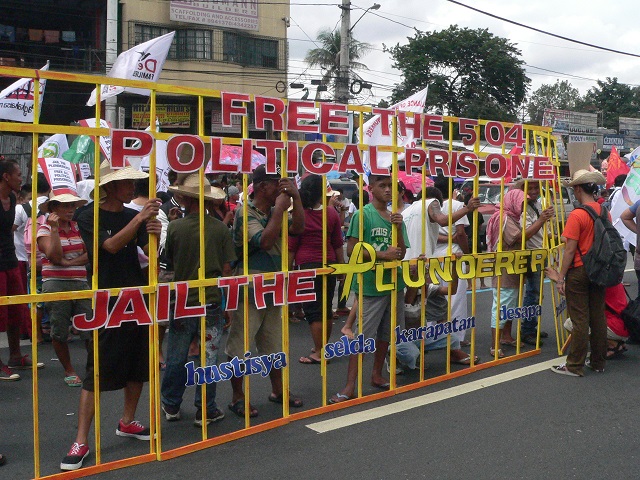 “Not even during the regime of Gloria Macapagal Arroyo were such measures implemented,” said Renato Reyes, secretary general of Bagong Alyansang Makabayan (Bayan). The regime continues to violate the people’s right to peaceably assemble, he added.

A day before, Lawyer Edre U. Olalia, secretary general of NUPL, scored the “deliberate inaction/delayed action by QC government on Bayan’s permit for SONA.” He said the permit was deemed granted by operation of law because of that delay. The garrisoning of Commonwealth Avenue failed to smother the protesters who came in droves, said the SONA ng Bayan emcees.

By mid-afternoon during the program, they remarked that from the elevated stage (they were using the back of a large truck) they could not see to the end of the crowd that attended. Until mid-afternoon, teachers and students in uniform were still arriving.

Fortunately, the SONA ng Bayan organizers had thought to line the streets with high-quality speakers (although it did not reach the end of the line).

From all walks of life

The Sona ng Bayan gathered together in Commonwealth Avenue thousands of people from all walks of life and ages. Young and old, city folks and indigenous mountain dwellers, employed and unemployed, teachers and public sector workers, farmers, fisherfolk, urban poor, women, priests, seminarians, artists, scientists, youth and children as young as eight years old, and students from elementary to college, joined the march carrying or wearing makeshift protest calls. Mostly the messages reflected call for President Aquino, the ‘pork barrel king’ and the “holDAPer” to be held accountable for his unconstitutional Disbursement Acceleration Program (DAP).

An eight year-old boy carrying a “DAPat Managot” (You should be accountable) placard patiently explained to Bulatlat.com that this simply means if you did something wrong, you should be punished for it. He attended the Sona ng Bayan with his grandmother, a member of Gabriela. He said he had really wanted to go. He came with other children who happily carried “DAPat Managot” placards.

Some teenage girls and school girls from different areas came with their own posters depicting their hardships: in one area, the girls drew their life under constant threat of violent demolition; in another, the schoolgirls drew their plight under the K to 12 education ‘reforms.

Teenage boys from Anakbayan in District 3 of Quezon City said it was their first time to join the SONA ng Bayan, but they comprised some of the most active in shouting chants while marching in Commonwealth.

Daycare students of Parents Alternative Inc. and Batibot school under Salinlahi advocates for children also drew colorful posters depicting their demands. These were carried to the SONA ng Bayan by their parents, said Madz Santiago, chair of Salinlahi Alliance for Children’s Concerns.

Seminarians affiliated with PCPR (Promotion of Church People’s Response) came wearing their white habits, bearing their demands on Chinese banners attached to long poles. Redemptorist seminarian James Bien, 16, said that even though they’re still young, they know about the culpability of the president.

The workers and the church people came with large individual letters of “Enough,” and “Impeach Noynoy,” plus “DAPat Managot” sturdy placards. Later, they used these as shield against the blast of water from firefighters’ hose, which the police used to try to push back the SONA ng Bayan participants. The protesters had cut away parts of the razor wire used as one of barriers.

Some of the protesters, like the delegations from Central Luzon and from Southern Tagalog, have started on caravans as early as two days before. First-timer in Sona, Rey Garados, 38, told Bulatlat.com that the first night they arrived in Quezon City on July 27th they were harassed and dispersed by the police, forcing them to seek shelter that night at the UP Diliman covered court. “It was raining then and we could not just sleep outdoors.”

He said increasing poverty prompted him to join the SONA ng Bayan. “The emcee is right. There’s nothing to expect from the president.”

Garados is a fisherfolk earning his living from Laguna de Bay. He said that under the Aquino administration’s project to construct the C6 highway, tourist parks, floating bar, casino and hotel at Manila Bay, Laguna de Bay and parts of Rizal, he and millions more living and working in the surroundings of Laguna de Bay would be rendered jobless and homeless.

Seventeen-year old Jhegg Osabel, a Migrante youth, joined Sona ng Bayan saying she did it because, “of course, I want to help our people.” She disagreed with naysayers who criticized rallies and rallyists. “Everybody will benefit if our demands like jobs and education were met,” she said.

There were many out-of-school youth because families cannot afford to send them to school, the parents are jobless, Osabel said. That had been her situation, too.

Osabel is studying now only because she opted for the ALS (Alternative learning schools). “I don’t want to burden my parents, it would be more difficult if I were to insist on attending a regular school.” At 17, she is studying for the second year high school level.

Some protesters arrived during the protest program wearing their school uniforms. Civil engineering freshman student Adrian Carl Cabugniang from Adamson University joined the SONA ng Bayan for the first time. He can’t believe at first that he was there indeed. “Just this morning I was only watching this on TV.”

From Angeles City in Pampanga, 77-year old Angelina Sabado joined their caravan to SONA ng Bayan. A hilot (traditional physical therapist), she and members of about 300 more families live under a bridge in Angeles City. They have long been a target for demolition, but lack of a relocation site prompted them to fight the city mayor’s attempts to demolish their dwellings. Whenever the river swells, their homes are inundated or washed out, but, Sabado said, she has lived there for the past 10 years and she’s still alive, dreaming of a better future. A member of Kapanalig in Angeles City, Sabado said she has been joining rallies for years now.

There were BPO workers marching under the banner of BIEN (BPO Industry Employees’ Network), but their organizers said they may lose their jobs if they gave interviews.

The twenty–four leaders of NXP Semiconductors marched with Kilusang Mayo Uno. Their company has replaced its negotiator with another in their still unfinished Collective Bargaining Agreement. The management has terminated the 24 union leaders during the union’s CBA fight for a eight-percent wage hike. The management accused them of having led an illegal strike after majority of the union members did not report for work on legal holidays in April and May 1 Labor Day. Last month, the KMU belied Labor Secretary Baldoz’s claims of respecting union rights, saying the shrinking unions and strikes in the country are directly attributable to “intensified violations of workers’ rights being carried out by big capitalists and the Aquino government.”

Unionists and members of associations of contractuals joined the SONAng Bayan with their own placards and flags. A longtime worker of PLDT Group estimated that eight in 10 workers of the telecoms giant are now contractuals, and they are graduates of electronics and communications engineering. A new worker at PLDT now receives minimum or just a bit higher than minimum, compared to years before, he said.

Members of DAREA (Department of Agrarian Reform Employees Association) drove all the way from Ilocos Norte to join the SONA ng Bayan. Jenny Drulay, DAREA President, told Bulatlat.com that as much as a fourth of total employees of DAR have been terminated under the Aquino government’s rationalization program. Under this program, the Aquino administration is trying to diminish the cost of keeping DAR by forcing older employees to retire ahead of their actual retirement age, and dismissing the contractuals.

Before converging together at Commonwealth Avenue near Ever Mall, Sonang Bayan participants marched carrying colorful protest emblems: headgears with calls to jail corrupt politicians, including President Aquino, T-shirts with angry and witty messages against corruption, streamers and banners of various sizes and colors and materials, and partial and full effigies mostly of President Benigno Aquino III. Scientists with AGHAM came with interconnected balloons bearing pictures of heads of government embroiled in the pork barrel scam and DAP. The group carrying the interconnected balloons said this is to show the interrelatedness and links of corrupt officials.

The protesters branded President Aquino as “pork barrel king.” The giant effigy they burned at the same time Pres. Aquino was delivering his Sona in Congress depicted him also as a giant ‘HolDAPer’ sitting on a throne carried by marchers along Commonwealth Avenue, and pelted and hit by angry protesters during the program.

The SONAng Bayan marched and held the program in a symphony of chants. In one group the favorite was “Noynoy, Tuta,” “Dapat Managot.” Although some of SONAng Bayan participants were already tired, most of them participated by chanting and replying to speeches, and dancing especially when the Jerks performed the SONAng BAyan favorites, “Sayaw sa Bubog” (saying that nothing has really changed after EDSA) and “Rage.”

Unlike the airconditioned, carpeted halls of Congress where President Aquino delivered his 5th SONA, the SONAng Bayan was held under the rain and the sun. And toward the end of the program, under the blast of chemical-treated water from firefighters’ water cannons. The police and soldiers tried to push back the SONAng Bayan participants in preparation also for the departure of VIPs from Congress.

The SONAng Bayan judged Aquino “unfit to be president of the Republic.” They capped the rally with the burning of Aquino ‘HolDAPer’ effigy, amid their rallying cry calling for the ouster and accountability of a president they blame for corruption, fascism, puppetry to US, and adding to the peoples’ misery.