“While conducting an investigation on the JDF (Judiciary Development Fund) is fair game considering that there should be no sacred cows in government, the JDF inquiry comes at a time when the SC is set to consider the motion for reconsideration filed by the Executive on the DAP.” – Kabataan Rep. Terry Ridon

MANILA – Youth leader Vencer Crisostomo has linked Malacañang to the supposed social media campaign calling for one more term for President Benigno Aquino III. Anakbayan announced their counter campaign, agreeing to the call for another term but with a twist — “The next term: JAIL TERM for PNoy.”

The youth group Anakbayan also released a meme on their Facebook account yesterday depicting a mugshot of the president whom they called “holDAPer” (mugger), and “guilty.”

The ‘One More Term for Pnoy’ social media campaign surfaced after the statement by the president’s youngest sister, TV host Kris Aquino, that President Aquino has the support of the “silent majority” amid his falling popularity ratings. Malacañang denied that they are behind it. But the youth group Anakbayan does not buy it.

“Aquino is showing signs of being an extremely delusional megalomaniac. Clearly, Aquino has gone out of his mind,” Crisostomo said. He cited Aquino’s “attack on the Supreme Court, the yellow ribbon campaign which flopped, the crying SONA and now this bid for eternal rule – all to defend his illegal holDAP.” DAP or Disbursement Acceleration Program, a funding mechanism disbursed at the discretion of the executive using billions of illegally collected “savings” from the national budget, was declared unconstitutional by the Supreme Court July 1.

Crisostomo said the people want the “Thief Executive” to be held accountable for the plunder of funds under his Disbursement Acceleration Program (DAP) and for other crimes committed against the Filipino people. But Aquino has been adamantly defending the DAP.

“The Thief Executive is terrified that he will no longer be immune to charges and imprisonment when he steps down as president. It is no surprise that in the 2015 budget, they are proposing bigger DAP-like funds as election bribe fund to ensure Aquino’s or his candidate’s 2016 victory,” Crisostomo said.

Aside from that, President Aquino is suspected to be behind the harassment of an anti-pork stalwart Bayan Muna Rep. Neri Colmenares, and the move of Congress to probe the Judiciary’s Development Fund being handled by the Supreme Court.

Last Monday, an organization called Movement for People Empowerment (MPE) filed a case at the Office of the Ombudsman in Iloilo City against Bayan Muna Rep. Neri Colmenares. The case is a graft complaint on supposed overprice of a two-classroom building in Barangay Dela Peña Primary School in Barotac Viejo. The project was requested from Colmenares’ office by Barotac Viejo Mayor Niel Tupas III whose municipality later implemented it.
Colmenares said that after the Department of Budget and Management (DBM) agreed it was worth funding, the budget for it went directly to the Department of Public Works and Highways (DPWH). Like in other Bayan Muna projects, Colmenares said not a single centavo passed through him or was given him in connection with the project.

Rep. Colmenares said he is ready and willing to prove that the charges are false and malicious. He told Malacañang that instead of trying to discredit the opposition, it should listen to the public demand for an impartial investigation on the plunder of pork barrel funds, including administration allies. At present, only three opposition senators are facing plunder charges in connection with the alleged pork barrel scam.

President Aquino is being challenged by Bayan Muna to open to the public all the projects of departments and agencies under the President and all members of Congress who endorsed projects thru the Disbursement Acceleration Program (DAP).

“We also ask all members of Congress to open all their bank accounts for public scrutiny. Additionally, we should all submit ourselves to a lifestyle check,” said Senior Deputy Minority Leader Colmenares.

Compared to the billionaires and multimillionaires in Congress, partylist representatives particularly those from the frequently persecuted progressive bloc are always at the bottom rung in terms of net worth.

As the hearings for the impeachment case against Aquino draw near, Bayan Muna Rep. Carlos Zarate fears that similar cases of harassments will likely be filed against other members of the Makabayan Bloc.

Zarate vows that like in the past, this renewed harassment against them will not cow or deter them from continuing their advocacies. “On the contrary, it will only embolden us to continue with our exposé and opposition to the corrupt and anti-people policies of this administration,” he said.

Aside from the Bayan Muna representative who has also been alluded to in the speeches of Aquino and other leading allies, the members of the judiciary are viewed as target also of President’s resbak or revenge in connection with Aquino’s slipping popularity over revelations of corruption.

Putting pressure on the court

The House Committee on Justice begins its investigation on the Judiciary Development Fund (JDF) Tuesday. The timing has been criticized. Some politicians, including those supporting Aquino, told the mainstream media that the probe is “ill-timed” as it might be construed as Aquino’s revenge for the Supreme Court’s anti-DAP ruling.

That is what it is, indeed, said an anti-pork partylist representative. Speaking on the JDF probe Tuesday, “In today’s hearing, we’ve witnessed how administration allies planned to exact revenge against the SC. This is the ‘resbak’ Mr. Aquino demanded in his fiery speech against the SC,” Kabataan Partylist Rep. Terry Ridon said in a statement.

Ridon also believed that the probe, despite its importance in the name of transparency, is ill-timed.

“While conducting an investigation on the JDF is fair game considering that there should be no sacred cows in government, the JDF inquiry comes at a time when the SC is set to consider the motion for reconsideration filed by the Executive on the DAP,” Ridon noted.

Ridon hopes that the JDF investigation would not pressure the Supreme Court into surrendering its position on DAP.

“It is but right for the SC to resist all attempts by Palace allies to push it against the wall,” he said. 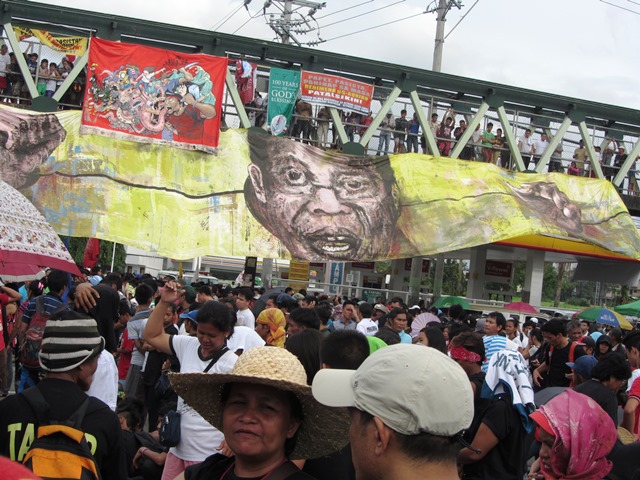 Meanwhile, protests actions against pork continue to be held. This Tuesday August 5, members of the Kilusang Mayo Uno (KMU) trooped to Mendiola Bridge to demand accountability of all involved in pocketing or diverting public funds. On Wednesday, members of Gabriela Women Party trooped to Congress demanding the removal of pork in President Aquino’s proposed 2015 budget. Anakbayan, meanwhile, aside from starting a social media campaign calling for Jail Term for Noynoy, also vowed to continue holding protest actions against Aquino and his DAP.

They are set to hold campus noise barrage protests on August 15, and a big demonstration on August 25, National Heroes Day and a year after the big anti-pork protest in Luneta.

A multi-sectoral alliance of anti-pork groups including church people has also unveiled plans to embark on a people’s initiative against pork barrel.