“With more than a million passengers riding all three lines a day, the MRT and LRT generate more than enough income for their operations and maintenance. That’s the reason why big businesses are drooling over and trying to buy them.”

MANILA – Amid talk of a fare hike in LRT, Transportation Secretary Joseph Emilio Abaya was branded as pabaya and madaya (negligent and cheater) by train commuters’ group in a picket protest last Friday October 10 in front of the office building of the Department of Transportation and Communication in Ortigas. Protesters said under Abaya pabaya (negligent), accidents and deterioration of the country’s railways continue to worsen, despite the billions of public funds allotted to it. The protesters wanted the government to discontinue privatization of LRT and MRT and put an end to the threat of fare hikes.

Hernan Tiu-Laurel, co-convener of commuters’ group RILES Network, said Abaya is also being madaya (cheater) because with President Benigno “Noynoy” Aquino III, he helps to deceive the public by making it appear that the private concessionaire poised to take over LRT-1 and expand it to Cavite are shelling out billions of money for it. 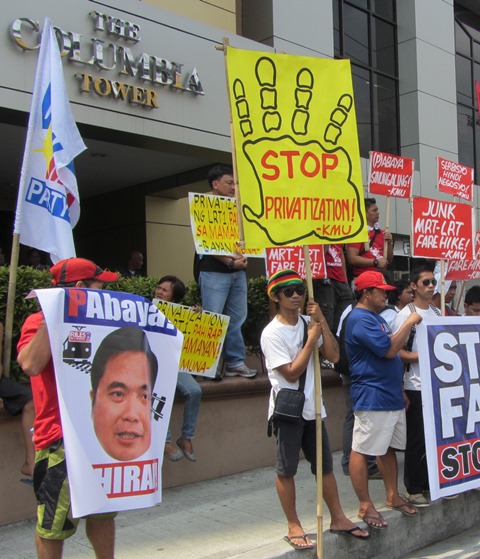 “The public-private partnership is one huge scam. They’ll use our capital, the nation’s capital, to finance the business,” Laurel said. But in privatization, the profits would be cornered by the private corporations.

Tiu-Laurel, a representative of small businessmen, said his sector and that of the workers are in the same rank when it comes to being victimized by negligent and scamming government officials.

Over the weekend a statement of the MPIC-Ayala group said the fare hike is a crucial bank requirement to lend them money for the P65 billion ($1.477 billion) project. Bayan Muna Rep. Neri Colmenares said this “again proves that the public-private partnership (PPP) program is nothing but privatization and the cost to finance this is again being passed on to commuters.”

Rep. Colmenares has vowed earlier that they would do all they could to stop this fare hike.

Like charter change, a fare hike in LRT (and MRT) is being pushed by the government from time to time, but it has always been rebuffed by public outcry. This month marks renewed push for the fare hike, renewed opposition and another seeming backtracking by the government.

Media reports announced the position of government and private train operators that the fare hike is “inevitable” or “certain” and that it is bound to happen soon, or that it should have happened yesterday. But given the public opposition, the transportation department cited their search for “appropriate timing” of the fare hike.

Last Friday Oct. 10 as members of RILES Network, Bayan Muna and Kilusang Mayo Uno denounced the Aquino government and Transport Secretary Abaya’s hand in the looming fare hike and LRT privatization, DOTC spokesperson Michael Sagcal reportedly said that the department did not set a target date for the implementation of the new fare matrix for the Light and Metro Rail Transits (LRT-MRT), which will be based on the P11 ($0.25) boarding fee plus P1 per kilometer formula.

This is public deception, said Sammy Malunes, spokesman and convener of RILES Network.

“The truth is, the hike was already considered approved when the government signed the privatization deal with the Ayala-Pangilinan consortium and is just awaiting implementation once public outrage cools down,” Malunes said.

In fact, Jose Ma. Lim, president of Metro Pacific Investment Corp. (MPIC), the biggest shareholder in the consortium that bagged the LRT deal, was reported as saying: “The concession agreement we signed committed to the tariff hike effective August 2014.”

Lim reportedly said “the fare hike is already delayed,” and they hope the increase will be implemented as soon as possible so they can move forward with the creditors who gave commitments when they submitted their bid. He even warned that after the delay in fare hike, the cost of borrowing could go up.

Protesters said only profit motives drive the push for a fare hike.

The RILES Network said in a statement that there is no need for a fare hike, because the actual cost of a P15 ($0.34) ride in the MRT and LRT, which can cover operations and maintenance, is just about P9 ($0.20) and the remaining P6 ($0.14) is “going directly to the guaranteed profits of private contractors under onerous contracts and to pockets of corrupt government officials.”

Malunes also belied the government’s claim that the fare hike is needed to improve the services of the MRT and LRT, saying that the government has enough funds to operate, maintain and even expand the operations of the country’s railway system.

“With more than a million passengers riding all three lines a day, the MRT and LRT generate more than enough income for their operations and maintenance. That’s the reason why big businesses are drooling over and trying to buy them. The government and big business are just using the MRT and LRT’s terrible conditions to try to justify the fare hike and attract more private contractors and investors,” he said.

Under public ownership and maintenance, LRT 1 has not given the public headline news about accidents and frequent malfunctions, said Hernan Tiu-Laurel in a speech in front of protesters at the DOTC. He ascribed the LRT’s better maintenance record to the fact that LRT-1 “has been run by public servants.”

Comparing the track record of LRT-1 to MRT (LRT-1 has run for 40 years, MRT3 has run for only 20 years) why are there so many problems with MRT3? Tiu-Laurel asked.

Unlike LRT-1 and 2, MRT3 started and remained privately owned.

Tiu-Laurel disclosed that under a private consortium, MRT3 began operation with second-hand trains, which the Sobrepeña and Ayala groups passed off as brand new. He called “all those oligarchs” as scammers. When the private operators failed to implement their desired fare hike, the government was forced to bail out its foreign loans and some of its obligations, but the government continues to spend up to P4 billion ($90.9 million) per year in subsidy to privately owned MRT3.

Now, with the PPP contract involving the private takeover of LRT-1 operations, the commuters’ group fears it will become like MRT3 in the near future – with maintenance and operation hostaged by profit motives.

But it did not mention in the same report that the MRT is getting more than double the government subsidy the LRT gets every year. It also did not mention that the LRT 1 had planned for and budgeted the rehabilitation of its train system, which was supposed to be financed from its own income, even before the Aquino administration took power. But no thanks to certain requirements imposed by the DOTC under Sec. Abaya, the rehabilitation plan and procurement of certain supplies were slowed down. The LRTA reported in 2013 a lower than expected Major Final Output citing the non-completion of three out of 15 targeted rehabilitation projects, which it blamed on bidding processes, which are under the DOTC control.

Sammy Malunes of RILES Network blasted the Aquino government’s “insistent push to burden us commuters by increasing fares in the MRT and LRT just to honor its onerous sweetheart privatization deals with big capitalists.”

The commuter’s group also accused the government of spreading lies and trying to deceive the public in an effort to dampen public outrage against their planned fare hike.