Ten years ago today, veteran protest leader Danilo Macapagal, who survived the cruel martial law years, disappeared under the regime of his own cousin, Gloria Macapagal-Arroyo.

Danilo Macapagal, popularly known as “DM” in Nueva Ecija (a province 115 km northeast of Manila), is always ranting and raving against the powers-that-be, whether in a speech at a rally or just a regular conversation. He regularly uses phrases like “mga putanginang pasmadong utak” (literally, sons of bitches with spasmodic brains) referring to human rights violators from the ranks of the military, police and paramilitia.

DM served as secretary general of the militant Bagong Alyansang Makabayan’s (Bayan or New Patriotic Alliance) local chapter for 17 years. Yes, he is generous with putanginas when he refers to the government. 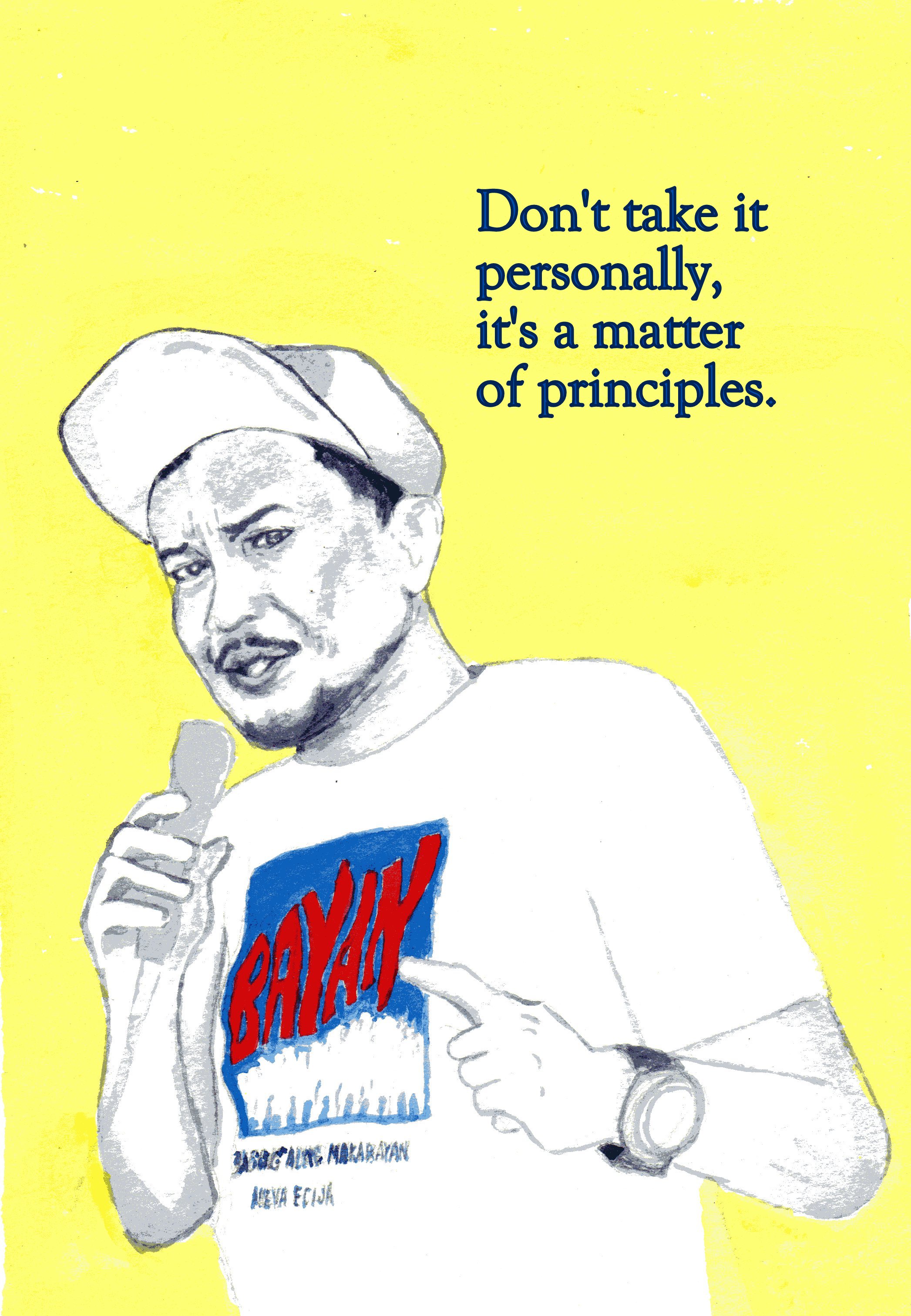 On the night of March 3, 2005, DM, aged 50 and single, was abducted as he arrived at his home in Victoria Mansion, Bitas village, Cabanatuan City, Nueva Ecija. He is still missing as of this writing, and could have very well fallen victim to the putanginang pasmadong utaks.

Witnesses said that DM was about to unlock his gate when three men forced him inside an aluminum van, while the fourth suspect, the van driver, waited. DM was heard to have said “Ano bang kasalanan ang nagawa ko sa inyo?” (What have I done wrong?) as he fought off his abductors.

The Philippine National Police (PNP) in Nueva Ecija formed Task Force Macapagal, supposedly to investigate the abduction, after DM was reported in the media as a “cousin” of President Gloria Macapagal-Arroyo. However, less than a week into the investigation, the PNP had insinuated in national TV that DM might have been done in by “former comrades.” So much for an “investigation.”

DM came from a middle class family in Nueva Ecija, and is Macapagal-Arroyo’s distant cousin. In 2002, DM was invited to lunch at a provincial gathering by a cousin, former Rep. Pacifico Fajardo at the National Food Authority (NFA) office in Cabanatuan City. Governor Tomas Joson III and a whole array of high-ranking officials were also there, and to DM’s surprise, “luncheon” was actually a welcome party for President Arroyo.

By DM’s own account to fellow activists, the President told him:“Magkamag-anak naman pala tayo, sana wala nang nagpoprotesta dito.”(So, we are relatives, then you shouldn’t be protesting against me.)

To DM, blood relations take a backseat to his long-held principles.

For more than 20 years, DM has been a high-profile activist who survived the martial law years and the succeeding regimes. He finished Law at the Araullo Lyceum (now Araullo University) during martial law but never took the bar because he said he had lost faith in the justice system.

DM was one of the founding leaders of the Alyansa ng Bayan sa Nueva Ecija (Alab-NE or People’s Alliance in Nueva Ecija), the predecessor of the militant Bayan in the province.

When Bayan-Nueva Ecija was formed in 1985, DM was elected founding deputy secretary general. In 1987, he was elected secretary general, a position he served until 2004, when he asked to be relieved of his duties because of his poor health. Earlier, when the progressive Bayan Muna (People first) party-list was formed in 2001, DM assumed the position of provincial coordinator, a duty he held until his abduction.

DM is a regular feature of demonstrations, provincial, regional and national. He is always at the frontline, leading the negotiating panel in facing the phalanx of anti-riot policemen. He has had his share of violent dispersals, of harassment and surveillance. He would be on top of a jeepney, or a makeshift stage on a truck, giving fiery speeches and spewing out generous putanginas against bureaucrat capitalism, feudalism and imperialism.

Being a provincial mass leader, DM was always present not only in multisectoral rallies, but also in peasant mass actions, facing goons, private armies, the police and military. In the feudal, warlord-dominated province of Nueva Ecija, DM was always alongside the organized peasantry in their fight against landgrabbing, in their struggle for genuine agrarian reform.

DM had his share of violent dispersals, of harassment and surveillance yet he remained undaunted. He was a favorite subject of photo documentation by plainclothed intelligence agents in rallies. DM had a choice to live a comfortable, middle class life, but he had chosen to take the side of the struggling masses.

When he has the time and means (to pay the phone bill), he would, on early mornings, call up radio stations in Manila to give his say on current issues. When cellphones came to fashion, he would “text” his opinion to his favorite radio programs, calling for the downfall of the current government. DM is a lean, mean, propaganda machine.

At the time of his abduction, DM’s income came from selling insurance policies. Before that, his income came from the two shops that he had been running for 20 years – the Cruz Optical shop and, beside it, a barber shop both owned by his aunt. Although he did not have the school training, DM acquired skills from practice, and from his optometrist aunt. DM himself would check a customer’s vision, repair glasses, refract a pair of eyeglass.

To all Nueva Ecija activists, a trip to Cabanatuan, let alone a walk through Burgos street would not be complete without stopping by the Optical shop. DM’s optical and barber shops along Burgos street was where they could read the newspapers, make a free phone call, have coffee (or even snacks, if one’s in luck), leave a message for other people, even ask for legal advice, and all the while listen to DM rant and rave against the status quo.

Of course, DM’s shops were also where full-time organizers and mass leaders can avail of free eyeglasses, and free haircuts. DM refused to charge a fee. After all, it was to DM where fellow comrades run to to “borrow” (most don’t pay back) money for transportation fare, tuition, dinner, cigarets, etc. If his mouth was quick to spew out expletives, his hand was quick to extend whatever material or financial support he could give. “Tuwing dadaan kayo dito, nalalagasan ako,” (Whenever you drop by, I am left with less money) he would jokingly complain to full-time activists who regularly borrow money. A fellow activist in need may not be spared of his carping, but he never leaves the shop empty-handed.

DM was also known to openly criticize and berate other activists, but one eventually learns it was his way of showing affection.
Not only activists frequented DM’s place. His visitors included judges, professionals and even police officials seeking help or advice from the national democratic movement. For years, DM has been the face of the militant protest movement in Nueva Ecija.

He sported a mustache and beard, and playful comrades would tease that he looked like the Russian revolutionary leader Vladimir Lenin, especially because of his thinning hair. His birthday, which falls on February 8, is marked by comrades because it comes before the Feb. 10 Lupao massacre (an incident where 17 peasants including women and children were killed by soldiers in Lupao, a town in Nueva Ecija) commemoration, and he would usually prepare pancit and ice cream at the shop before the regional rally.

In 2004, DM gave up his position in Bayan due to his failing health. This year, he failed to even attend the rally for the 18th year commemoration of the Lupao Massacre.

At 3 pm on March 4, day after DM’s abduction in Nueva Ecija, another mass leader, Mer Dizon who is secretary general of the Alyansa ng Magbubukid sa Gitnang Luson (Alliance of Peasants in Central Luzon) in Zambales province (120 km northwest of Manila), was abducted by armed men from his house. He surfaced days after at the Iba municipal jail.

This emerging trend brings to mind the abductions in 2002 when two Bayan Muna members, Johnny Orcino and Honorio Ayroso, were abducted in Nueva Ecija on Feb. 9, a week after the abduction of two others in Aurora province (around 144 kms from Manila) on Feb. 2. DM himself joined the search for the two missing men in Nueva Ecija and was among those who criticized the enforced disappearances and worsening human rights violations.

Three years later, DM himself would be abducted.

It is ironic that someone like DM who survived the cruel martial law years seems to have now fallen victim to pasmadong utaks, indeed, under the regime of his cousin Gloria Macapagal-Arroyo.