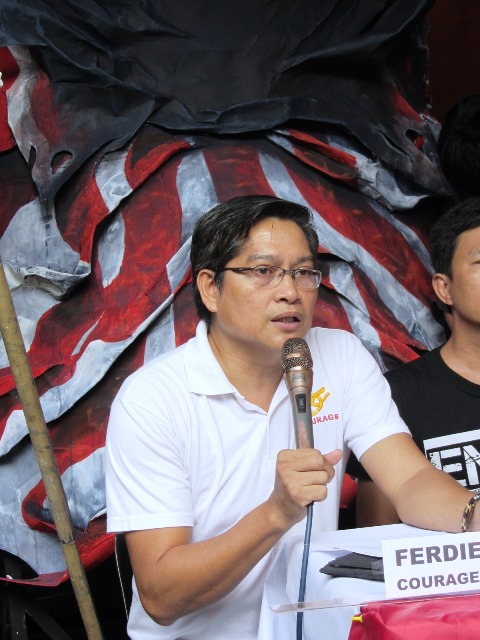 MANILA – On the eve of Labor Day, a government workers’ union assailed the harassment of their leaders who received letters from suspected military agents, redbaiting them as members of the Communist Party of the Philippines.

“This is clearly a direct threat and we have nobody but this government to blame if something bad happens to them,” said Ferdinand Gaite, national president of government workers’ union Courage.

“These military personnel did their homework, they know where the leaders live, their families, what time they arrive and leave for office and what route they take. Obviously, we have been under surveillance. If there is one thing we will admit to, it is the crime of doing organizing work for government employees’ rights and advocate genuine public service,” Gaite said in a statement.

Gaite said Rosalinda Nartates, Courage secretary general and president of the Consolidated Union of Employees of the National Housing Authority received a letter from a certain Capt. Evangelista of the Philippine Army.

Another government union leader, Manny Baclogan said identical letters were sent to both his office and home address.

Gaite cited an incident when a woman leader of Courage, whose name they withheld, was harassed by a suspected military agent who sat next to her inside a jeepney. Gaite said the agent, who introduced himself as Jay, gave a handwritten letter to the union leader, telling her to change her ways “for the country’s sake.”

Copies of the letters were furnished to the media in a press conference today, April 30.

“From someone who is also working in the government, I want you to cooperate and work together for your own good while you are still employed by the government. I hope that you will not disregard this help I am offering you as this is the most effective way for you to make amends with the government,” one of the letters read.

Another letter, signed by a certain Capt. Evangelista of the Philippine Army, stated that the “revelation” was brought to their attention by “a former colleague” of the union leaders.

“We want to give you a chance to defend yourself against the accusations by your former colleague,” the letter read.

Gaite, in a statement, deplored how the military has maliciously insinuated that the accusations came from Randy Vegas and Raul Camposano, two of their organizers who have been detained in the Bicol region for three years due to “trumped-up cases.”

Another letter warned that the places the union leaders frequent are known to the military who had also identified their families and children. In the letter the leaders were accused of neglecting their jobs because of their supposed active involvement in “revolution.”

“It is not wrong to join a movement as long as it is not through a violent revolution, which is wrong. I am a soldier who cares about you,” the letter read.

One letter even warned a union leader to call them “before it is too late.”

These letters were sent to union leaders just this week. Though this is not the first time, Gaite said at the press briefing that they were alarmed.

Gaite told Bulatlat.com that such harassment is a result of their active organizing both in national and local government offices. He said their group has at least an annual 10 percent growth in their membership. They are also among progressive groups calling for decent wages for government employees and a critic of what they refer to as anti-people policies.

He said they would file a complaint before the Commission on Human Rights and would consult human rights groups and lawyers on other possible legal moves they could take, citing a recent victory when the Court of Appeals granted the protection writs of amparo and habeas data to human rights lawyer Catherine Salucon in March.

“We can explore the same track,” he told Bulatlat.com.

Gaite said such harassment is related to their participation in the May 1 rally and part of the “continuing attacks against the public sector employees, human rights defenders unionists.”

Despite the threats, Courage would be at the Labor Day rally.

“If they thought they can scare us into silence, they are badly mistaken. Our May Day rally is just a taste of what is more to come in the remaining months of President Aquino who made life miserable for the more than 1.4 million state workers,” he said.