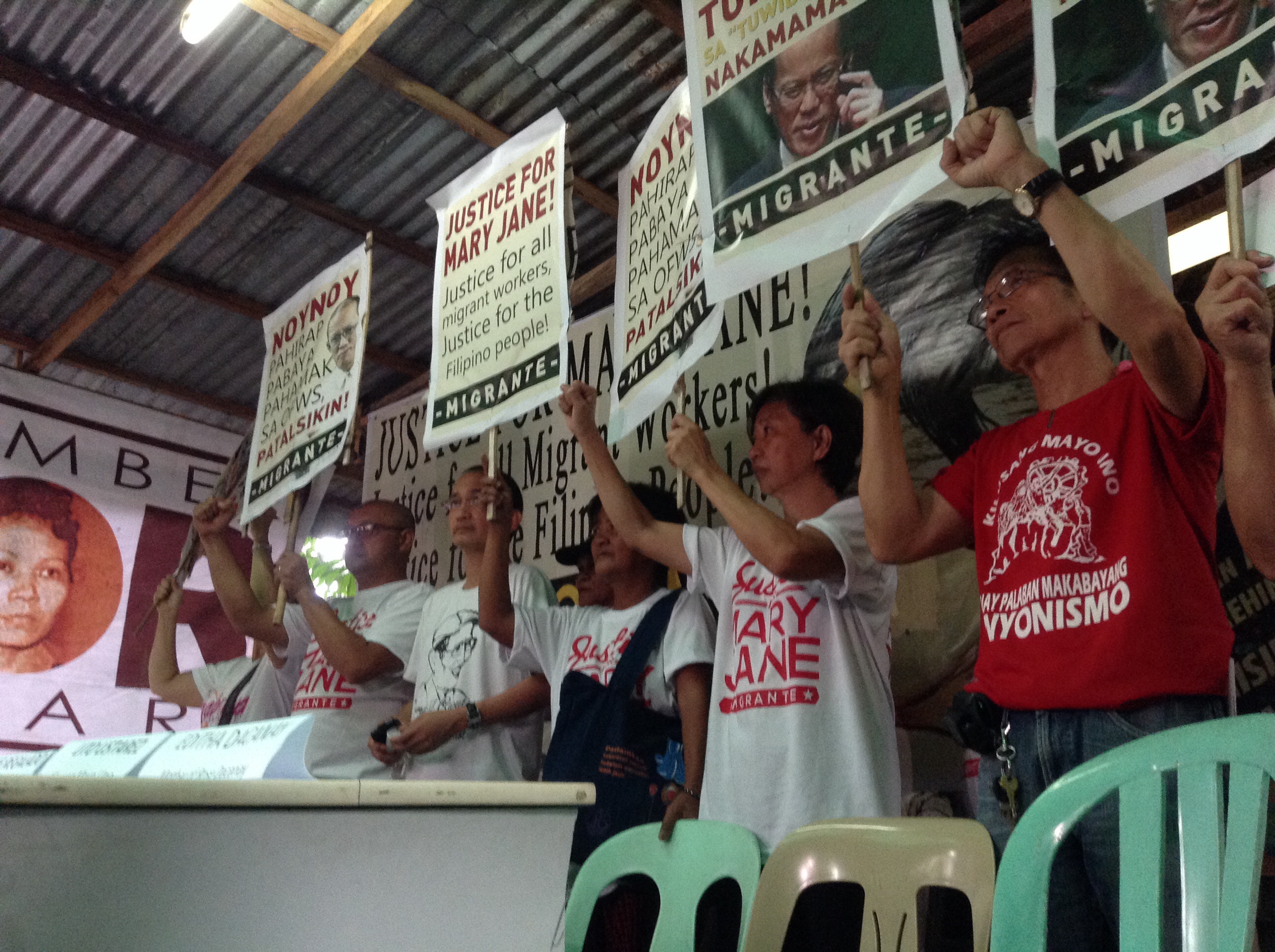 “I kept calling out my sister’s name, who I thought was already in heaven.”

MANILA – Mary Jane Veloso’s sisters, Maritess and Darling, were told by government officials to go to the “execution island” of Nusakambangan in Cilacap, Indonesia before 8 p.m. of April 28. Their phones had no signal.

At past midnight of April 29, they heard loud, deafening gunshots. Maritess broke down.

“I kept calling out my sister’s name, who I thought was already in heaven,” she said during the press briefing in Manila on May 1.

By the time Filipinos, perhaps even the entire world, were already heaving a collective sigh of relief and were rejoicing over the stay of their sister’s execution – they were still grief-stricken.

For 15 minutes, she said, she believed her sister was already dead. She kept imagining her sister kneeling down without handcuffs and blindfold, as Mary Jane had requested.

“Ate, do not cry. I can sense that she is still with us,” Darling said, consoling Maritess.

Maritess later learned that Philippine embassy officials already knew that there would be a stay in the execution but waited for them to hear the gunshots before telling them.

“That was torture,” she said.

Maritess recalled that in the evening of the execution, she was informed that Mary Jane wanted to see her. She was brought inside prison. A man talked to her in Bahasa and then left her alone. She thought that perhaps Mary Jane’s last request was not granted. She said, as she wondered what her sister’s last words for them might be.

Yesterday, May 1, the Veloso family joined the Labor Day rally and assailed the Philippine government for its inaction on Mary Jane’s case.

Mary Jane’s mother Celia said their bid to save her daughter was an emotional rollercoaster ride.

In the afternoon of April 28, they cheered and happily hugged each other when they heard the news about the surrender of Mary Jane’s alleged recruiter, Ma. Kristina Sergio. Then embassy officials asked them for a meeting to discuss the details of Mary Jane’s burial.

“Are you saying that the execution will push through?” she asked a Philippine embassy official, who replied that they need to discuss it, being one of the possible turnout of events.

Her daughter, she said, remained strong in the face of imminent death. She learned that prison guards and even fellow inmates who became her friends cried when she was about to leave her cell.

“But she beamed and gave a peace sign. This made them cry even harder,” she said.

Her daughter, she said, never cried during their visits. She told her family that she wanted to wear a white dress, a sign of her innocence.

Planning for the worst, Celia said the family already decided to hold a wake for her in Manila as a sign of gratitude to all those who supported them. They even planned to bring her remains to Mendiola, a stone’s throw away from the Malacañang Palace.

But those plans vanished along with their grief, when they learned of the stay in her execution.

“It felt like a thorn was plucked from my throat, my chest, all the pain was lifted,” Celia said.

The family visited Mary Jane at the Yogyakarta prison, where she was brought back from execution island. Celia said her daughter never looked lovelier.

“Maybe all the while she was trying so hard not to cry. But yesterday, her smile was very beautiful,” Celia said.

The family’s lawyer Edre Olalia, all throughout their stay in Indonesia, kept receiving text messages with “offers” to save Mary Jane from execution. Olalia’s Indonesian number was posted in public as reference to press releases he issued during his stay.

“We can make condition MJ pretending execution done but in fact we will send MJ to Filipina…if agree tomorrow on Monday prepare n finished a financial, this is the only way to make her free,” the text read, which Olalia received on April 26, 9:19 p.m. via his Indonesian number.

Another text read, “How? helping or not? Time is running.”

Olalia, who is also secretary general of the National Union of Peoples’ Lawyers, received at least six messages from the anonymous sender. He told Bulatlat.com he “totally ignored it” as “I have no time for these silly distractions.”

Mary Jane’s execution was stayed to give way for Philippine legal proceedings, following Sergio’s surrender. The Department of Foreign Affairs said the postponement was due to “purely legal” efforts from the part of the government, belittling strong local and international pressure on the Indonesian government.

The Veloso family, since they returned to Manila yesterday, May 1, has been receiving criticisms that they are “ingrates.” One internet meme even insinuated that Celia be brought back to Indonesia to be executed via firing squad.

Olalia said the family was only venting out at yesterday’s press conference after a long period of frustration and disappointment on what they perceive as government neglect and misrepresentation. He added that the Veloso family is “grateful to anybody who might have, in good faith, contributed to the sparing of Mary Jane.”

“They want to clarify that President Aquino’s moves, belated and insufficient as it may be, is of course, welcome,” Olalia told Bulatlat.com, adding that it is only the Philippine government that can officially communicate with the Indonesian government on the cumulative appeals by the broad sectors of society both here and abroad.