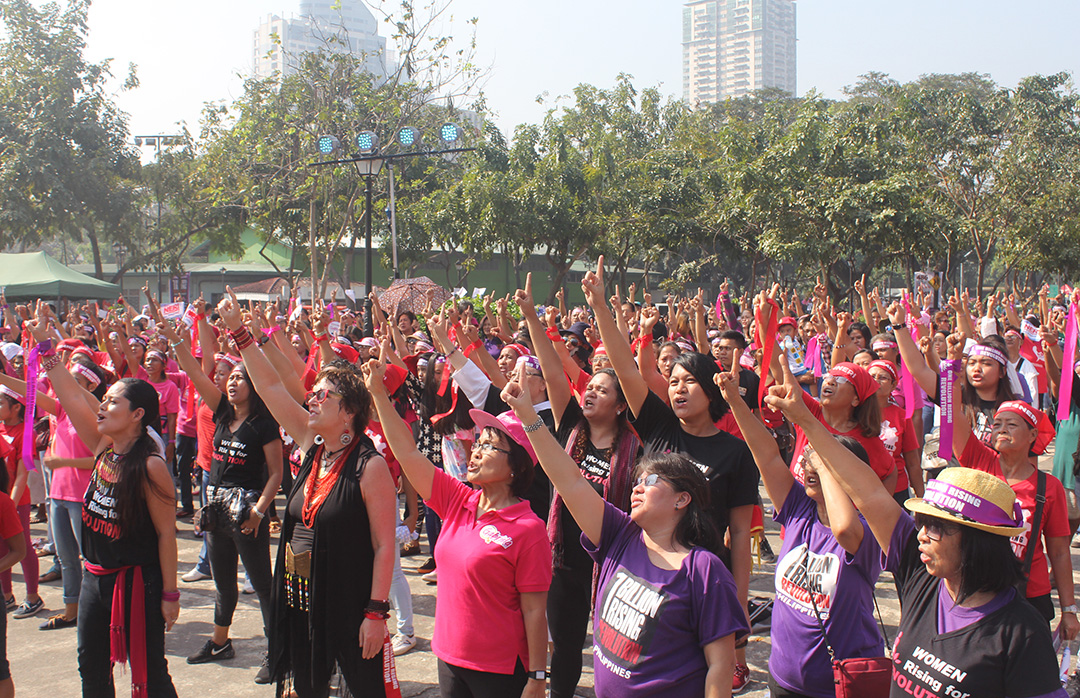 (Brace yourselves/ As we all stand together / Our long wait now ends / Our lives we will defend / Raise our arms to the sky / Gabrielas with no fear, no fear / One billion rising / Rise in revolution!)

MANILA – The upbeat melody of One Billion Rising Philippines’ anthem, “Bangon na sa Rebolusyon” could easily get people off their feet to dance. But many women at the Luneta “rising” on Feb. 14 moved not just to the music, but also to the lyrics of the song, that spoke to their hearts, and of their plight.

“It’s inspiring, encouraging, like it’s telling you, ‘You can do it,’” said “Lena,”48, a victim of violence who became an organizer of Gabriela national office, the women’s group leading the One Billion Rising (OBR) in the Philippines.

Interviewed by Bulatlat, Lena said she has nothing to hide, but requested anonymity because she worries that some detractors might use her past against her. It is not a hard thing to do as many Filipinos commonly stigmatize victims, instead of the wrongdoers.

Lena was raped as a child, prostituted in her teens, and spent more than two decades in an abusive marriage. But her dark past now helps her see clearly, to understand everything in her life and in society, now that she is organizing and helping other oppressed and exploited women.

‘Why did these things happen to me?’

Lena was born in Hilongos, Leyte province in Eastern Visayas region. She has five siblings by the same mother, but with different fathers. Her mother left to work in Manila, and came home pregnant several times. She would leave the child with her husband, and go back to Manila, only to be home again to give birth to another child. One of those children was Lena.

She said her stepfather was a kind, hardworking man, a peasant who treated them well, in spite of being humiliated as “raising another man’s piglets.” But it was the father of her stepfather who preyed on her.

“He was the one who ruined my future, made me want to end my life. Talagang binaboy ako (He really abused me),” Lena recounted.

The 68-year-old man started raping and sexually abusing her when she was nine. She was so sickened at herself, and began asking questions. “I thought, I was a different child, because I was doing what married people do. I was so mad at myself, and wished I had physical disability, instead of a pretty face,” Lena recalled.

She could not bear spending another night of abuse, and when she turned 11, saw a chance to escape when she and a village friend were recruited to work in Manila. They were promised good-paying jobs. But their recruiters turned out to be a prostitution ring, and they ended up in a casa in Baclaran.

“We were put in a room, and the customers would look through a peephole to pick a girl,” Lena described the prostitution joint. Then she sat and drank with a customer, earning from tips and part of the price of drinks. If the customer wanted more, she was forced to have sex with him.

She rationalized to herself that the men were just her tools to survive, and that she could get by with just letting them touch her and lust after her. She tried ways to avoid having sex with a “customer,” and succeeded to convince some. But she was not always lucky.

“I once ran away from a hotel without my panties on,” she said.

She also tried illegal drugs, but quit as soon as she did. Lena said her village mate and best friend went mad from drug addiction, as she turned to illegal drugs and alcohol to cover her shame from dancing scantily dressed in public.

After six months, Lena escaped from the casa.

She loitered around Pasay, asking eateries to let her wash the dishes in exchange for food. Eventually, she was hired as a housemaid, but her employer’s son tried to rape her. “Ganun din, di ako tinantanan (It’s the same thing over again. It never relented),” she lamented.

Lena recalled working as house help for a Chinese employer in Quezon City, who owned a shoe factory. They had low wages and no day-off. Their employer even brought materials for them to make shoes. Worse, the employer locked them inside the house. She ran away.

Lena said she wasn’t able to accumulate clothes or personal belongings, because she had to always escape to save herself, leaving her things behind.

“I used to ask myself, ‘Why is God doing this to me?’ I’m not a bad person,” Lena said she was desperate and had nowhere else to turn to.

‘A man to bring me back my honor’

While working in a grocery, Lena met a vendor who was also from her hometown in Hilongos. She trusted him, thinking “he was the one who would bring back my honor.” Before she turned 18, they had a civil wedding. “I wished to have a family that is complete, I wanted to change my life,” she said.

Sadly, her husband was no different from the men who abused her. “He degraded me, saying I should be grateful that he married me even if I was no longer a virgin,” Lena recalled.

“He treated me like a child, never let me make my own decision, and how he verbally abused me..he treated our children the same way,” she said. They had two daughters. He beat her up only once, but the psychological abuse was non-stop. Lena’s husband was so mistrustful, at the same time, wary that she might attract other men. He never allowed her to wear shorts, never even let her go to the market, and at times, locked her and their daughters in the house.

Lena suffered “all forms of maltreatment” from her husband, who even forced her to have sex in various ways, saying “you’re used to it anyway, because it used to be your job.”

But Lena admitted not even knowing the pleasures of sex, as she still lives with the horrors of being abused as a child.

In 2004, Gabriela began organizing in Lena’s urban poor community. She attended meetings and discussions and began to understand the roots of the poverty around her, and the abuses she underwent.

Lena easily understood “feudalism,” having seen how the small landlord who owned her stepfather’s farm constantly harangued them, even forcing them to work as house help in their parties. They took care of his cattle, but were never given any share of the fruits of their labor. She recalled going to school only three times a week, because it was several hours of walk away, and she has to help with farm work.

She easily understood “patriarchy,” being subjugated by her husband, abused and kept at the mercy of men who hold the economic power. At that time, she had reunited with her wayward mother whom she asked to live with them. Lena, her mother and daughters lived under the rule of her husband.

Lena said that when she told her mother about the abuses that happened to her, her mother was deeply saddened, and only then confessed that she too, was raped and abused while working in Manila.

In 2009, Lena finally decided to leave her husband. The last straw came when she found out she had an ectopic pregnancy, and while at the hospital, decided to get a ligation. Her husband was furious because she did not ask for his permission, and suspected that she wanted the ligation so she “could do it with any man you want.” It came to the point that he would even check her underwear and accuse her of having just finished sex with another man.

Lena and her husband eventually agreed to a separation, with the help of Gabriela. Her husband took the breakup well, and they remain friends, said Lena. But her eldest daughter, then 20, was mad at Gabriela, and perceived the group as the cause of the breakup. “I explained to her, ‘I am the victim here, you know how your father maltreated all of us,’” Lena said. It took time, but her daughter understood.

After her split with her husband, Lena underwent counselling. “I had difficulty making my own decisions. I used to be so scared of my husband. Whenever he raised his voice, I just cried in a corner,” she said.

“Now I can give context to my experiences. I have changed a lot because I have overcome,” Lena said. As a Gabriela member, she discovered her qualities and potentials as an individual, as well as the power of the collective. Within the collective, she found equality among peers.

“I may not have a college degree, unlike other women in Gabriela national office, but everyone treated each other equally and with respect,” she said.

She fully trusts in collective action after seeing how it helped her. She even feels it during protests. “I used to be so scared the first time I joined a mobilization, because I had seen on TV how rallies were violently dispersed and people get hurt. But it was actually empowering,” she said.

Prostitution thrives in poor communities, and now, she helps other women understand their situation, like what Gabriela did to her.

“Many women, because of starvation, risk their body. When your stomach aches, you resort to it (prostitution), in exchange for just a cup of coffee,” she said. “But I advise them, don’t get tied to that. That is not a solution to survive…if that is your source of income, don’t be ashamed of it. But think of yourself too,” she said.

Lena said she tells women they can find ways to collectively alleviate their hardship, for example, mobilize resources for income-generating projects, such as their rug-making project.

As a leader and organizer, Lena helps women confront personal and community issues. She handles cases of violence against women and children (VAWC). She said she still tends to “get carried away” when she handles a VAWC case. But she contains her anger, and is able to advice the victim to overcome her fear and shame.

She also gives advice on marital conflict, and suggests ways for women to resolve problems with their husbands. “Of course they would be short-tempered at home, because of money problems, because they don’t have jobs,” Lena said. In their discussions, the women realize the bigger context of their personal problems, which is the plight of the urban poor.

“Many of us came from different places in the Visayas. Why did we end up here?” Lena said their situation becomes a platform to discuss Philippine history and struggle. As women and men see the bigger picture, they improve their relationships to work together as part of an organization fighting for social change.

“It heartens me when they thank me. I am not well-known, but I am able to help other women,” she said. She appeared truly happy, with her work and her family. She now has three grandchildren by her eldest daughter. Her youngest daughter, now 25, is an organizer for Gabriela-Youth.

After decades of cringing under the shadow of abusive men, Lena finds strength in the camaraderie among women – mothers, wives, daughters and all. From a woman struggling to survive for herself, Lena now has a bigger, long-term perspective not just for her family and herself, but for the country. She knows the threats against activists and organizers like her, but she perceives it as part of her role in society.

“Anything can happen to you any moment. But it matters little when you’re part of the movement,” she said. “It’s an honorable life. Even if you go hungry, you know the small things you do matter. You’re committed and you’re proud of what you’re doing,” she added.