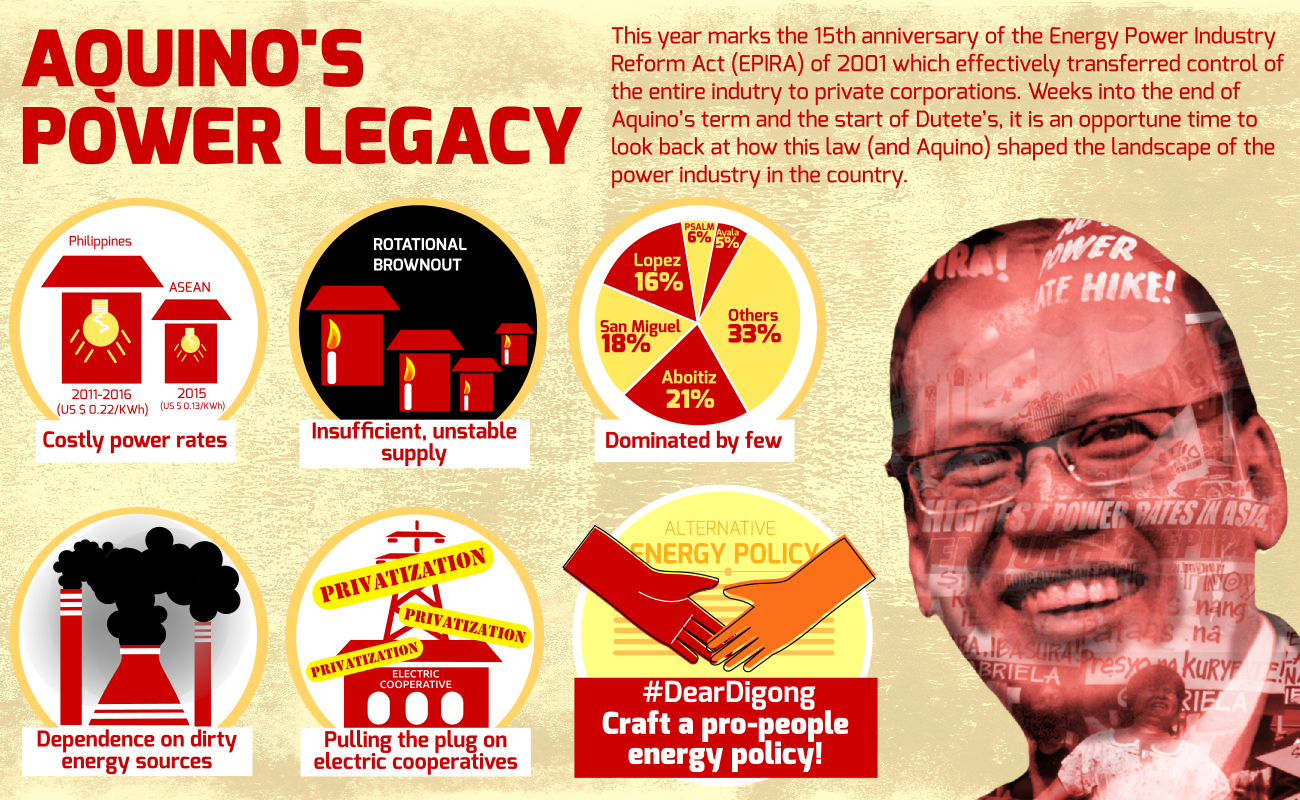 June 8 marks the 15th anniversary of the Energy Power Industry Reform Act (EPIRA) of 2001 which effectively transferred control of the entire indutry to private corporations. Weeks into the end of Aquino’s term and the start of Dutete’s, it is an opportune time to look back at how this law (and Aquino) shaped the landscape of the power industry in the country. 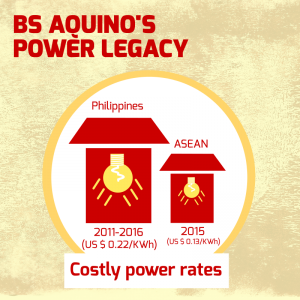 While it has slightly dipped in the past years, residential power rates remain expensive (see chart below). This year, the average rate for 200 KWh-consumers is 77.2% more expensive than pre-EPIRA rates. The average Meralco effective residential rate for 200KWh-consumers from 2011-2016 is Php10.17 (approx. US $0.22) per KWh while the ASEAN average residential rates in 2011 was US$ 0.13. The national average electricity rate as of September 2015 is PhP8.04/kWh.

A large part of the fluctuations in electricity rates comes from changes in generation charges, which accounts for about 50% of the total rate. On top of this are the pass-on-costs in transmission and distribution, as well as taxes and universal charges. 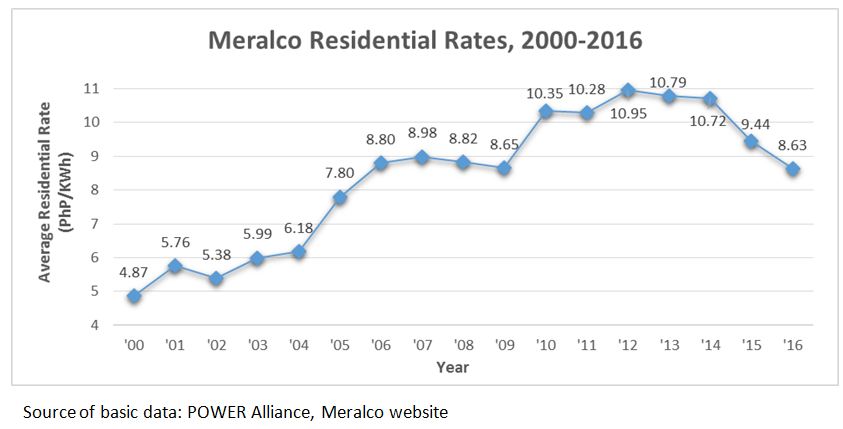 As if the the prevailing rates at the time were not high enough, in 2015, a Feed-In-Tarrif (FIT) charge of Php0.04057/kWh in the January billing of all electric consumers was added. This was more than tripled in April 2016 to Php0.1240/kWh (or an added Php24.80 in the month’s billing for average users). The FIT charge is an added sweetener for power developers to entice them to invest in cleaner technologies, to the burden of consumers.

Just recently, the Energy Regulatory Commission (ERC) approved a Php6.5 per kWh increase in the  transmission charge. This would translate to an additional Php78 for average users’ monthly bill. According to the ERC, this amount will be used to recover the differential charge for the ancillary service provided by the NPC to the NGCP representing March to October 2009 billing period. 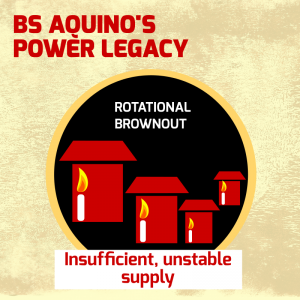 Our power supply remains insufficient. While more than 2,500MW capacity had been installed since 2010, it is still not enough to ensure stable power supply, especially in cases of forced and planned outages of some plants. The situation is much worse in Mindanao, where rotational brownouts have become the new norm.

Based on the Demand-Supply Outlook for Energy Security 2015-2030 in Luzon, DOE has already raised a yellow alert since 2010 for the possible power outages. In Visayas, baseload energy resources are needed since last year. Transmission of electricity is also a major concern in the Visayas and Mindanao region.

Mindanao has an installed capacity of 2,237 MW, dependable capacity of 1,860 MW and available
capacity of 1,363 MW. With a peak system demand at 1,435 MW as of June 2015, the power supply in the island is constantly insufficient.

This is mainly because very few new plants have been installed since 2010. Only three new plants with a total installed capacity of 288.9 MW were put up during Aquino’s term, largely because under EPIRA, the state has no power to install new power plants.

Dominated by a few 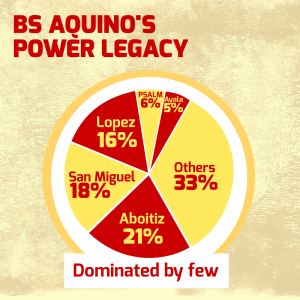 Only a few generating companies still dominate the sector (See Figure 2). In fact, only three companies control 55% of the generation sector. Aboitiz group leads with 21% of the country’s total installed capacity, followed by San Miguel (18%) and the Lopez Group (16%).

From the state’s monopoly of the generation sector, EPIRA transferred this control, in the interest of creating “competition”, to the private sector. However, far from a vibrant atmosphere of true competition, EPIRA created a fertile ground for the formation of an oligopoly in the sector.

This situation raised the possibility of cartel-like behavior among power generation companies. This was highlighted in December 2013 when a series of forced outages by several power plants caused the power rate to increase by Php4.15 per kWH. 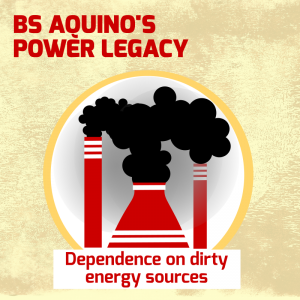 Despite available sources of renewable energy, Philippines is 61.2% fossil fuel dependent (World Bank, 2006-2010) and the majority of the committed projects are coal-fired plants. The country is a major consumer of coal since 2005. In the succeeding years, the coal industry has doubled from a historical average of 1.5 million MT (MMT) coal production to 3 MMT. Of the 77 applications of coal-fired plant project in protected areas, 40 are owned by Aboitiz.

The country’s dependency on dirty energy such coal is a manifestation of the government’s hypocrisy in its commitment to reduce carbon emissions by 70%. The outgoing administration have granted various companies an Environmental Compliance Certificates (ECC) constructing twenty-four (24) coal fired power plants.

As it aggravates climate crisis, coal mines and plants all over the country continuously pollutes the environment and harms the lives and livelihood of communities living within these carbon-emitting dragons such as the 30-year old coal-fired power plant in Calaca, Batangas and coal mine in Semirara Island, Antique.

Pulling the plug on electric cooperatives 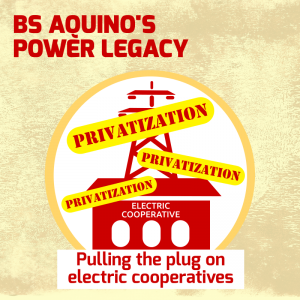 There is also a continued drive to “corporatize” electric cooperatives in the regions. One of the most controversial is the case of Albay Electric Cooperative (ALECO). In 2014, San Miguel Corp., through its subsidiary Albay Power and Energy Corp., assumed control over ALECO.

Contrary to its promise of providing efficient electricity distribution to the province, consumers reported massive blackout after SMC-APEC took over the ailing ALECO. Its debt problem also ballooned from P3.6B before privatization to P6.9B according to a report in 2015.

Aside from removing the people’s (i.e., the member-consumers) control over the management of their cooperatives, the privatization and takeover by large corporations further strengthens their control over the whole industry since the giants of the generation sector own or is planning to own the largest distribution utilities in the country.

A chance for change 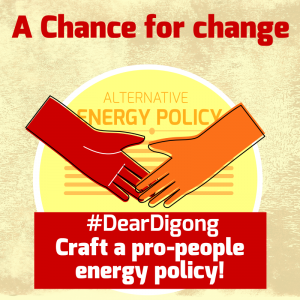 After 15 years of its existence, EPIRA clearly has not brought nothing but misery to the Filipino consumer. And the Aquino administration has done nothing to resolve this in its stay in power.

Duterte’s incoming administration should completely depart from Aquino’s way and reform the power industry to ensure that the interests of the people are put first before corporate profits. He can start with small steps toward reclaiming the state’s role as the lead figure in the development of the country’s power industry.

For one, he can stop the impending privatization of the state’s remaining power plants such as the Agus and Pulangui hydroelectric plants in Mindanao and instead allocate funds to rehabilitate its facilities. He can also reverse Aquino’s policy of privatizing ailing electric cooperatives.

But ultimately, he must completely reverse the state’s policy of privatization and deregulation of the power industry by replacing EPIRA with a pro-people energy policy.