At one point during his interrogation, he was made to strip naked and face his armed interrogators in a room chilled by air conditioning and an industrial fan.

MANILA – Jerome Aladdin Succor Aba, 25, vice chairperson of Sandugo – Movement of Moro and Indigenous Peoples for Self-Determination – flew to the United States on April 17 for meetings with Filipino communities and human rights advocates. He would have stayed for these activities for a few weeks. But even as he holds a 10-year multiple entry US visa, the US Customs Border and Protection agents said he had “a technical glitch” on his visa.

Based on Aba’s ordeal at the hands of immigration agents in the Philippines and the US, the so-called glitch in his visa was likely caused by the US-led “war on terror,” the blue print of the Philippine military’s counterinsurgency war, aerial bombings, and extra-judicial killings. The killings and harassments of people due to this war in the Philippines have been keeping human rights advocates and Moro leaders like Aba busy. But the Philippine government, having aligned itself with the US in  waging this war on terror, has been vilifying legal and progressive activists such as Aba as “terrorist.” The US war on terror is a borderless war aiming to maintain US hegemony. It prepositions US troops and equipment and uses the troops of “allies” such as the governments of its former colonies like the Philippines.

Aba believes his involvement in human rights work in the Philippines is the main reason he was deported. But not before he was detained, interrogated, threatened and tortured first in a US international airport.

“With the Trump administration thriving on misinformation and falsehoods, there is no place for me shedding light on the US’ hand in the destruction of Marawi and the ongoing ‘war on terror’against my Moro and Lumad brothers in Mindanao. This US ‘war on terror’ led to the killings of civilians, forced evacuation due to aerial bombings in communities, and has reinforced Islamophobia,” Aba wrote in his statement after arriving back in the Philippines.

Various groups are now urging the Philippine government to lodge protests with the US regarding the detention, harassment and torture, and violation of Aba’s other rights including his right to a legal counsel while being interrogated. What Aba suffered in the US may hint of similar restrictions in movement, association and speech of other freedom-loving Filipinos and citizens.

Even as Aba was being held against his will, questioned and threatened by armed US personnel, the US Embassy in Manila was announcing the start of activities for the 34th Balikatan war exercises.

The US government and military have been training Philippine armed forces and the police, sharing information and boosting what it calls as their interoperability.

Yearly, “US and PH military demonstrate in Balikatan exercises the cooperation and interoperability between the U.S. and Philippines, consistent with the Mutual Defense Treaty and Visiting Forces Agreement,” the US Embassy in Manila said on Aril 19.

“To improve their ability to coordinate a multilateral response to crisis, the two militaries will continue their commitment to train and share information,” the US Embassy also said.

What happened to Aba also followed the recent training provided by the US Homeland Security Investigations to Philippine police officers.

It is instructive that Jerome Aba was twice held up by the Philippine immigration personnel at the NAIA before he was allowed to board the plane on April 17.

He arrived in San Francisco and before long, he faced US interrogators who already had compiled a thick stack of documents about him.

From Aba’s recollection of what transpired, the US Homeland Security and Customs Border and Protection agents treated him as a “terrorist,” forcing him to admit it in over 24 hours of interrogation under different agents in different rooms inside the San Francisco International Airport.

“Aba got a taste of some of the US military’s interrogation and torture technics reportedly being used in Guantanamo,” Cristina Palabay, secretary general of human rights group Karapatan, said at the first press conference where Aba shared what happened to him.

Aba recalled that he was taken out of the passengers’ line to the immigration and handcuffed. The US Homeland Security or Customs Border and Protection agents deprived him of his computer, cellphone, and luggage. They forced open his computer and cellphone and searched through his luggage. To his protestations and demands for a legal counsel, he was repeatedly told he has no rights. He was told the Universal declaration of rights did not cover him where he was. Five burly men would escort him when he needed to go to the men’s room.

It was approximately after around 24 hours into his detention and interrogation that Aba was first asked about what food he eats. Despite stressing he’s a Moro and he doesn’t eat pork, he was given a ham sandwich. “The tools of repression by the state can look so mundane,” he would write a few days later in his social media account.

At one point during his interrogation, he was made to strip naked and face his armed interrogators in a room chilled by air conditioning and an industrial fan.

Twice, he recalled being left alone in what looked like a deserted office, with a gun left lying around, at first, and the next time, a grenade and a cellphone. Aba purposely did not touch the weapons. “What did they hope to see me do? Kill myself? Start shooting at them?” he asked the media.

One of the interrogators called Lopez appeared to Aba as so riled up and paranoid that his hands would often reach for his gun if Aba moved a little while under questioning.

Aba noted that his behavior — ignoring the weapons left lying around, insisting he has rights — only seemed to infuriate the interrogators who kept accusing him, and forcing him to admit, that he is a “terrorist” or in league with “terrorists.”

As supposed proof, his interrogators presented Aba with a stack of papers about him. They showed his pictures with alleged “terrorists.” The US interrogators labeled the Moro Islamic Liberation Front peace panel chair Mohagher Iqbal and former Bayan Muna Rep. Satur Ocampo as “terrorists.” Aba replied that these two were not terrorists but are in fact working for peace.

“The US and PH governments want to terrorize dissent and keep the desecration of the country under wraps,” said Kabataan Partylist Rep. Sarah Elago. Bayan Muna filed a resolution in Congress seeking investigation and justice. 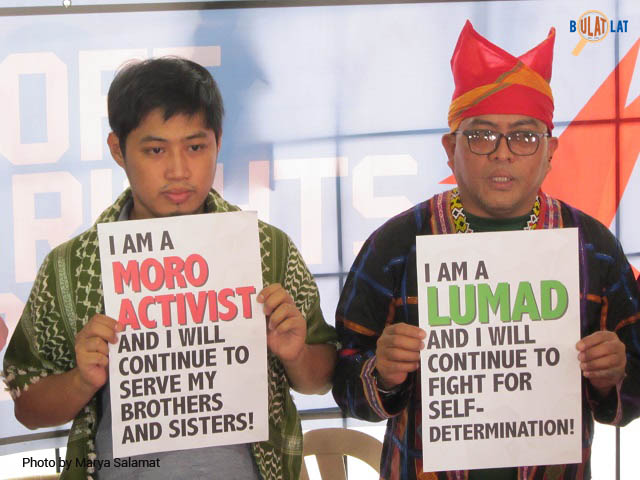 Aba has a lot to say to his countrymen and friends of the Filipino people in the US about the Duterte government’s killings and the role of the US-instigated war on terror. He said the brazen attacks on the people and their rights are being executed to protect the interests of big US corporations.

Amid the Philippine government’s intensified militarization of Mindanao, it opened vast lands of Mindanao, including the territories of the Bangsamoro and ancestral domains of the indigenous people, to exploitation and plunder by companies such as Dole, Unifrutti, and Del Monte, Aba said.

Aba expressed gratitude for “the untiring protest actions” mounted by friends and organizations from all over the USA- from Portland to New York City.

“Your quick response to my situation, such as the rally at San Francisco Airport and call barrage, has helped tremendously in my release from the cruel clutches of the CBP and Homeland Security,” Aba said.

In the face of increased military responses to people’s resistance, Aba urged the public to help spread “the truth the US government wants to hide from the American people and the whole world.”

Amid Martial Law in Mindanao, Aba said a million hectares are being encroached on and operated by foreign mining businesses and 500,000 hectares by plantations. Also, a million hectares are reserved for the expansion of oil palm plantations by 2020. In Marawi where the US and the Philippines maintain military facilities, the current rehabilitation plan being discussed includes expanding the military reservation.

The US is also expanding its military bases in the Philippines. On April 17, the same day Aba was being detained in the US as an alleged “terrorist,” US Ambassador Sung Y. Kim and Defense Sec. Delfin N. Lorenzana were holding a groundbreaking ceremony for the first major project under the “Enhanced Defense Cooperation Agreement (EDCA)” in Cesar Basa Air Base, Pampanga. Four others are in the pipeline. https://ph.usembassy.gov/enhanced-defense-cooperation-agreement-groundbreaking-ceremony/

“We will not sit on the sidelines and witness our people suffer from worsening environmental destruction, displacement, poverty, and grave human rights abuses,” Aba concluded in a public statement.