These will result in improved cognitive development leading to higher learning and educational attainment, thereby increasing productivity and wages, which will translate to a higher gross domestic product.

MANILA – Mothers will be able to recover well from childbirth and breastfeed their babies longer post partum after the lower house passed on second reading the Expanded Maternity Leave Bill or House Bill No. 4113 on Tuesday, in time for the Breastfeeding Month.

The bill increases to 100 days the fully paid maternity leave for women in private and public sectors regardless of delivery method. The proposed law seeks to amend Republic Act 7322, Labor Code of the Philippines, the Social Security Act of 1997, and the Revised Administrative Code of 1987 all of which provide for 60 days leave for normal delivery, and 78 days for Caesarean. Aside from the 100 days maternity leave, women workers may extend their leave to another 30 days but without pay. The Senate version SB 1305 seeks to grant 120 days with optional 30 days extension. If approved, the Philippines will be compliant to 98-day International Labor Organization (ILO) recommendation of 98-days maternity leave. 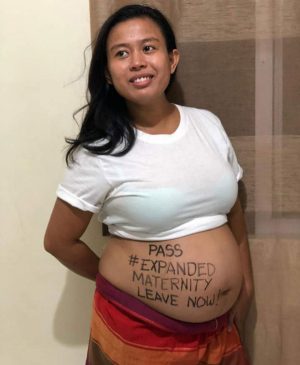 Among the principal authors are Gabriela Women’s Party Representatives Arlene Brosas, Emmi de Jesus along and Act Teachers’ Partylist Representative France Castro. Prior to the consolidation of 15 different proposed measures on protecting women’s maternal health after childbirth, both partylists have filed their individual measures in 2016. The Social Security System is tasked to pay female members who have paid at least three monthly contributions in the 12 months immediately preceding the semester of her childbirth based on the average monthly salary credit for 100 days.

De Jesus believes that the support garnered in the lower house is recognition of women’s vital role in society and economy. “This is concrete proof of the broad and diverse support for the demand to increase the maternity leave period from 60 days to 100 paid days,” she said.

Likewise, the women’s group believes that the measure will “provide for more time for breastfeeding and maximizes the health benefits for both mothers and babies.”

Fighting for maternal health and breastfeeding rights in a developing country

The Philippines has one of the shortest maternity leave periods in Southeast Asia region. Malaysia, Indonesia and Thailand all provide 90 days. Meanwhile, Vietnam bested others in the region by providing six months of pre and post delivery maternity leave under its amended Labor Code in 2015. (ASEAN Breastfeeding Forum 2017).

Vietnam, through the hard work of women in labor movement has adopted historic legislations to protect and invest in breastfeeding. Partnership of mothers, labor groups, and international non-governmental organizations have effectively lobbied for enactment of other landmark laws to protect breastfeeding such as the Law on Advertisement which bans breastmilk substitutes for children under 24 months and complementary food for children under six months.

Meanwhile, in developed economies such as Nordic countries, paid (full or partial) maternal and parental leave extends up to a year.

Paid maternal leave and other similar policies protecting women workers in developing countries is not limited to maternal and child health alone. It is also an economic issue that deserve sound policy approaches. In countries where cheap labor is an attraction for foreign investments, longer maternity leaves are viewed as hindrance in running businesses.

In the Philippines, the influence of the business sector in policy-making is always visible. House Committee on Women and Gender Equality Chairperson Bernadette Herrera-Dy admitted that the lower chamber has taken so long to extend maternity leave because some business owners have apprehension that it would affect their operations. Aside from the private sector, Gabriela Women’s Party also claimed that throughout proceedings in Congress, constant opposition and apprehension came from SSS and even from the Department of Labor and Employment. In fact, the business sector was able to lobby the Committee on Women and Gender in limiting the benefit to four pregnancies. The original consolidated HB 4113 aims to extend the 100 days of paid leave regardless of the number of childbirths per mother.

Contrary to the business sector claim that long maternal leave will decrease productivity and slow down economy, it is actually an investment in the mother and the child as human capital. Longer maternal leave will enable mothers to achieve breastfeeding goals.

According to WHO and UNICEF, improved breastfeeding rates lead to improved health and development for children, and improved health for women. These will result in improved cognitive development leading to higher learning and educational attainment, thereby increasing productivity and wages, which will translate to higher gross domestic product per nation.