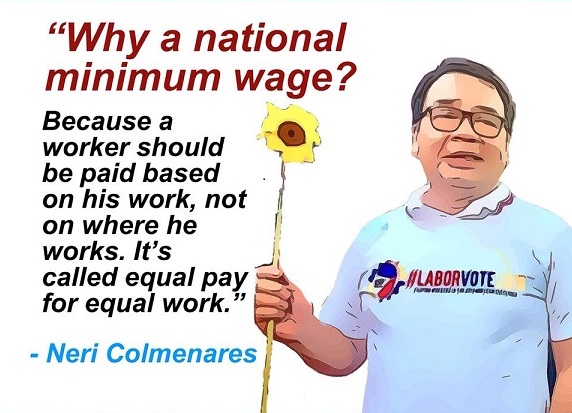 In Calamba City, Laguna, a province south of Manila, labor group Pamantik (Pagkakaisa ng Manggagawa sa Timog Katagalugan), the chapter of the Kilusang Mayo Uno (KMU) in Region 4, will converge at Crossing, Calamba City in the afternoon of May 1, following a morning of local, coordinated rallies. In Metro Manila, KMU member federations and allied groups will converge at Mendiola Bridge near Malacañang by noontime. They will meet with other labor groups at the Liwasang Bonifacio in the afternoon.

Southern Tagalog and Metro Manila are the Philippine regions with highest number of establishments, workers and unemployment rates. http://www.psa.gov.ph/content/employment-rate-january-2019-estimated-948-percent

Most workers’ gathering here plan to highlight calls to regularize contractual workers and increase the national minimum wages to at least P750. The progressive bloc of workers groups led by KMU is also highlighting calls to fight the “fascist attacks from the US-Duterte regime.”

Labor Day 2019 is turning also into a major campaign day for Senatorial candidate Neri Colmenares. A three-termer BAYAN MUNA Partylist Representative and a human rights lawyer, he is the main senatorial candidate of the labor sector. He graces the progressive labor sector’s main pick and also joins four other candidates, Ernesto Arellano, Allan Montaño, Sonny Matula and Leody de Guzman, as put forward and being campaigned for by other labor groups.

Senatorial bet Colmenares has proposed to do away with the regional wage boards and set a national minimum wage. He explained that since 1989, when Congress delegated its power to set minimum wages to the regional wage boards, a race to the bottom began with regard to workers’ wages. He said regions competed with each other in lowering wages to attract investors and eroding real incomes for workers. “It has created the situation where minimum wage workers can’t even earn enough to provide their families the most basic needs.”
The workers’ groups welcomed his vow to push for a law that would abolish the regional wage boards and re-establish a national minimum wage based on the actual cost of living in the country. He said it is high time for Congress to step in and give workers a substantial increase in wages and salaries.