How attacks against workers’ rights ‘censored’ us 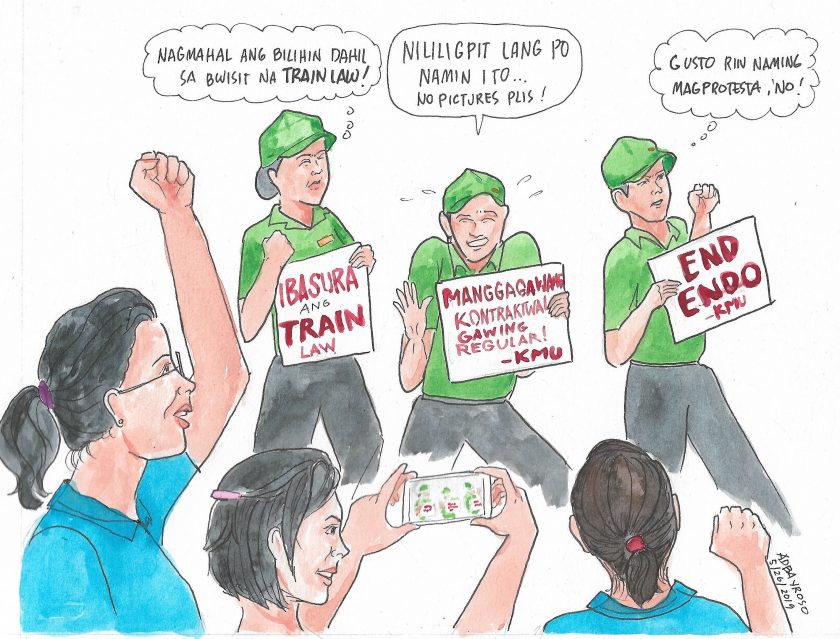 MANILA — It was impossible to resist the airconditioned rooms that the fastfood chains along the stretch of Mendiola offered to May Day protesters and even journalists covering the annual mobilization yesterday. Reality struck me that while the fiery speeches and burning issues might bring exhilaration to the soul and the sprit, a whopping 40-degree heat index could push the body toward the comfort of the shade and a cool room.

As soon as the program was over, many sought the comfort of a nearby shade, gulping down water, and resting and preparing for the next program at Liwasang Bonifacio.

We, on the other hand, gave in to the temptation.

There was no time to spare. We looked for an empty table and found none. So we looked for those who are likely to finish eating soon and gave them those puppy-eyed plea that we need that seat. After getting a table, I volunteered to order the food. And we quickly snarfed it down as soon as it was served.

In the middle of everything, however, the lights suddenly turned off. I was waiting something to happen – perhaps, the Big One? Then, I looked behind me and saw three restaurant staff marching ala activist with placards assailing the increasing prices brought to us by President Duterte’s tax reform package, and another calling for the end to contractualization.

For a split second, I thought there was a flash mob inside the restaurant. Why not? Workers in the service sector, after all, are unfortunately among the underpaid and overworked. A few more seconds later, we learned that some protesters earlier left their placards on the table and that the staff were merely clearing it up.

How unfortunate, really, since there were only three journalists in the restaurant at that time – Marya, Zeng, and I. And all three of them happened to be holding a spoon on one hand and fork on the other and not a camera to capture the moment.

One restaurant staff continued to toy with the placard. We could not resist but ask if we can have a photo when the lights came back.

One staff seemed fine with it. But just before my colleague Marya snapped her camera, another staff softly said, “uuuuy.” And the hesitation quickly escaped the eyes of the willing staff, betraying his wide and bright smile.

And suddenly we all knew what it meant. Even before Zeng pointed out explicitly that he might end up losing his job.

It is a sad reality that workers, especially contractual workers, are facing – deprived of their just salary and benefits, and now even their freedom of expression.

In fact, it has been a long-standing plan of Bulatlat to write a story or produce a short video documentary about the life of a contractual worker who will willingly allow us to identify them. We wanted to give a face to the workers behind the statistics. But we have yet to find one. So far, all of those we were able to speak to are hesitant. They all know too well the repercussions it may bring.

And they’d sadly endure it than lose their job.

This sorry state is what many labor groups wish to end. And there is just no other way but stand united. Whatever it takes.