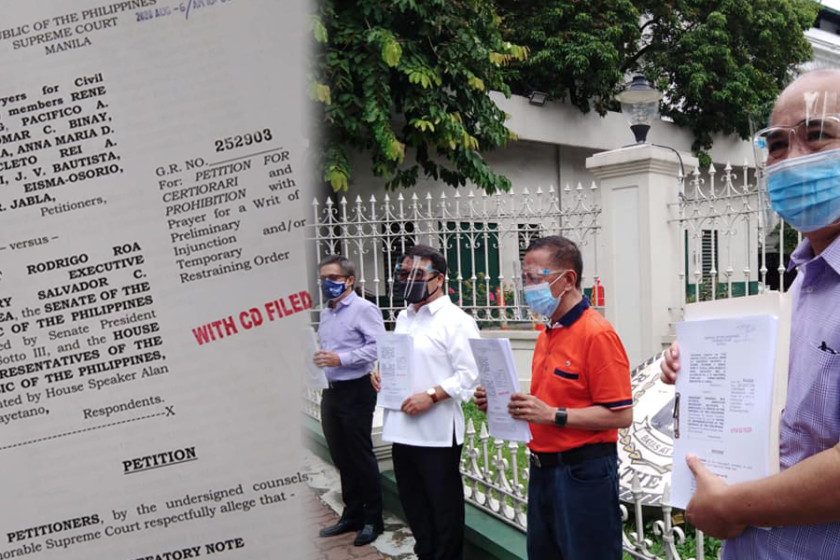 “The Anti-Terrorism Act of 2020 fails miserably to protect and preserve the guarantees of human rights and civil liberties enshrined in the Constitution and therefore must be struck down.”

The group is asking the high court to declare the law as null and void, adding that its provisions infringe the right to due process and violate the equal protection clause of the Constitution.

This is the 25th petition filed against the ATA or Republic Act 11479.

In a statement, Saguisag, who was detained during Martial Law, said, “It seems that what we fought for in 1972, is again back. The total disrespect for human life, dignity, human rights. And that was how we started. In some ways, it [Anti-Terrrorism Council] may be worse.”

The petitioners argued that the law is void due its vagueness and overbreadth.

They argued that an act may be vague “when it lacks comprehensible standards that men of common intelligence must necessarily guess at its meaning and differ in its application.”

“The overbreadth doctrine, on the other hand, decrees that a governmental purpose may not be achieved by means which sweep unnecessarily broadly and thereby invade the area of protected freedoms.”

In the international concept of a lawful prescription of a crime, the petitioners stated the following elements:

– The law must be adequately accessible so that individuals have an adequate indication of how the law limits their rights; and

– The law must be formulated with sufficient precision so that individuals can regulate their conduct.

With this, the petitioners said that these “elements of a lawful definition of what constitutes a ‘crime’ jibes with the tests of ‘vagueness’ laid down by the SC.”

Agabin, meanwhile, warned that the ATA “leaves law enforcers unbridled discretion in carrying out its provisions and becomes an arbitrary flexing of the Government muscle.”

The petitioners also questioned the authority of the Anti-Terrorism Council to take into custody a person based only on mere suspicion. They said that this would “put in constant danger the rights of persons under the Bill of Rights of the Constitution.” “It would violate not just the rights to life and liberty, but is also inimical to free speech,” they said.

They added that Section 29 of the law removes the judiciary of its constitutionally-protected prerogative over the power to arrest.

“Only courts have the power to issue warrants of arrest; therefore, it should not devolve upon officials of the executive, such as the ATC, who is composed of alter-egos of the President,” the petitioners said in a statement.

On violating the equal protection clause of the Constitution

The petitioners assert that the law would deny due process to those who are merely suspected of being a terrorist.

They said “the ATA further does not show any indication of the existence of any public emergency that would require the need for a special treatment of suspected terrorists. The ATA unnecessarily carves out the crime of terrorism as outside the realm of the criminal justice system, which is violative of the equal protection clause.”

The petitioners said that terrorism is a criminal act that destroys society. This must be stopped, they said, “to preserve the country’s security and democratic way of life.”

“But for a democratic country, like the Philippines, with the Constitution that we have, at the core of the right of the State to employ counter terrorism measures for self-preservation must be found the bedrock of human rights and civil liberties,” the petition read.

“The Anti-Terrorism Act of 2020 fails miserably to protect and preserve the guarantees of human rights and civil liberties enshrined in the Constitution and therefore must be struck down,” it added.