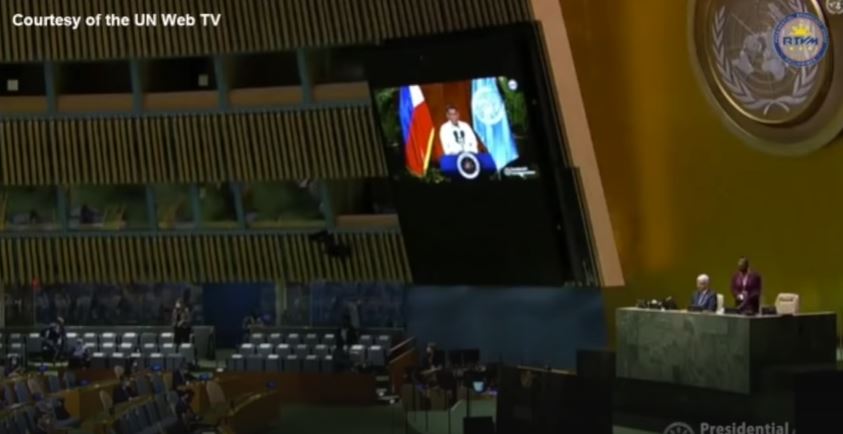 “Duterte would rather discredit human rights defenders and institutions than acknowledge that there are extrajudicial killings and other violations in the Philippines. He continues to deny what the whole world has already come to recognize.”

During his recorded speech at the 75th United Nation’s General (UNGA) Assembly on Sept. 23, Duterte claimed, “A number of interest groups have weaponized human rights; some well-meaning, others ill-intentioned.”

He claimed further that “the Philippines will continue to protect the human rights of the Filipino people, only that there are groups trying to discredit the functioning institutions and mechanisms in a democratic country.”

In reaction, Cristina Palabay, secretary general of Karapatan said that Duterte, “is posturing in making desperate pleas before the international community that is growing increasingly critical of his human rights record and tyrannical rule.”

“Duterte’s empty promise to ‘continue’ protecting the rights of Filipinos is betrayed when Duterte himself, just a few seconds later, continued to justify the drug war and the terror-tagging of human rights defenders, reiterating his administration’s distorted reasoning that the said campaigns are in protection of human life and the accusation that human rights groups and advocates are ‘weaponizing’ human rights,” Palabay said in a statement.

Bagong Alyansang Makabayan (Bayan) Secretary General Renato Reyes Jr. on the other hand said Duterte’s accusations against human rights workers is a blanket denial of human crisis in the Philippines.

“Duterte would rather discredit human rights defenders and institutions than acknowledge that there are extrajudicial killings and other violations in the Philippines. He continues to deny what the whole world has already come to recognize,” said Reyes in a statement.

Read: International rights groups call for an end to ‘cold-blooded killings’ in PH

On engaging the UN

Duterte also said in his speech that “To move forward, open dialogue and constructive engagement with the United Nations is the key.”

However, Palabay reiterated that the Duterte government did not even allow the UN High Commissioner for Human Rights and UN Special Rapporteurs to conduct an in-country investigation on the killings under the government’s campaign against illegal drugs and other human rights violations.

Palabay added, “Their (UN bodies) requests for such are met with threats of violence, wild accusations of foreign meddling, and demeaning insults. The Philippine government even rejected most of the findings and recommendations of the recent report of the Office of the High Commissioner on Human Rights and is currently finding ways to evade independent investigation at the UN Human Rights Council.”

Reyes also said that Duterte’s statement about engaging the UN is “empty rhetoric as it merely aims to blunt international criticism of his human rights record.”

“How can there be any meaningful dialogue and engagement with the UN if he does not recognize the existence of the human rights problem to begin with?” Reyes added.

On UN Human Rights Council Resolution on the Philippines

Meanwhile, a resolution on the Philippines is now being discussed at the UN Human Rights Council. A draft of the resolution was presented by the Iceland and the Philippines at the HRC 45th regular session according to Civicus, a global alliance of civil society organizations and activists.

This call was reiterated during an online forum led by Civicus on Tuesday, Sept. 22. Among the speakers are from Amnesty International, Human Rights Watch, Philippine Alliance of Human Rights Advocates and Karapatan.

Laila Matar, deputy director for UN at Human Rights Watch said at the minimum, the HRC resolution “need to be stripped of all government propaganda.”

He said that the resolution also has to reflect the serious findings of human rights violations as stated on the Office of the High Commissioner on Human Rights (OHCHR) report.

“It also has to make sure that the OHCHR would continue in monitoring and reporting comprehensively on the human rights situation and report also through interactive dialogues at the HRC so that the international community would have a chance to truly address human rights violations in the country,” Matar said.

“We are hitting dead ends, so to speak, domestically in terms of redress mechanisms, even as we continue to access them all – from the courts, to the Commission on Human Rights, to Congress, to the police, to the Justice Department. And this illustrates the levels of impunity and the constricted civic and democratic spaces reached at this point,” Palabay said.

“Which is why international human rights bodies, such as the HRC, play an important role, whether to aid in delivering justice and accountability and deter further violations, or to give an imprimatur to the current situation and to sign off to a death sentence for us Filipino defenders whose lives are at daily risk,” she added.

HRC to be judged by history

Meanwhile, Palabay said that they are aware of several interests at play – political or economical – with the coming up of the resolution on the Philippines.

She said that whatever will come out of this process, the HRC will be judged by history.

“We see this resolution on the Philippines as another litmus test on how responsive the council can act on dire situation of human rights and many stakeholders are looking into this,” said Palabay.

She expressed hope that “the HRC will gravely consider the implications for those in the frontlines of this epidemic – the victims and their families, the defenders braving the daily challenges, the people who yearn for justice – as well as the role and obligations of States to uphold, protect and defend human rights,” Palabay said.

She asked the HRC to hear their voices because at the end of the day, they are the ones – who are at the trenches who would have to “bear of the consequences of whatever action that will be decided upon by the HRC.”

“This, in my view, is the bottomline, because at the end of the day, we will all be defined by what have we done to make the world better for the most who need our solidarity and decisive actions. Lines certainly are being drawn everyday, as situation worsens, and it is our conviction and resolve for people’s rights which is the most important above it all,” Palabay added.