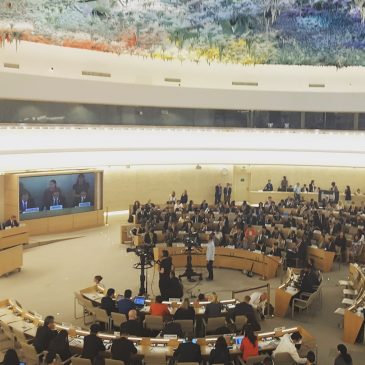 MANILA – Thirty five local and international civil society organizations urged the United Nations Human Rights Council (UNHRC) to “respond credibly” to the findings and recommendations of the Office of the High Commissioner for Human Rights (OHCHR).

In a joint oral statement delivered by the World Organization Against Torture (OMCT) before the 45th session of the UNHRC on Sept. 25, the groups pointed out that the “human rights situation in the Philippines has further deteriorated” following the release of the High Commissioner’s report last June.

The groups cited President Rodrigo Duterte’s continuous incitement to kill, the conviction of Rappler Chief Executive Officer Maria Ressa, the shutdown of media giant ABS-CBN, and the killing of a journalist and scores of activists.

The UNHRC is currently convened for its 45th session from Sept. 14 to Oct. 7. It is is about to announce a resolution on the human rights situation in the Philippines during this session.

The groups added that the Inter-Agency Panel announced by Justice Secretary Menardo Guevarra during the 44th Regular Session of the UNHRC “lacks transparency and directly involves branches of government” implicated in the human rights abuses.

“As such, it clearly cannot satisfy international standards of independence nor can it be credible or safe for victims to engage with,” the joint oral statement read.

In her report, UN High Commissioner for Human Rights Michelle Bachelet highlighted the need for “independent, impartial and effective investigations” into the killings in the country.

Bachelet also urged the Council to mandate her Office to “continue monitoring and reporting, as well as through support for technical cooperation to implement the report’s recommendations.”

“We urge this Council – at absolute minimum – to ensure continued monitoring and reporting on all aspects of the situation as clearly recommended by the High Commissioner. Anything less would not only be an insult to victims and their families, but send a green light to perpetrators that they can continue with impunity, with disastrous consequences on the ground,” the group said.

Cristina Palabay, secretary general of Karapatan, said that “independent investigations are very much needed to look into the rapidly deteriorating human rights crisis in the Philippines.”

In a related development, Karapatan welcomed the recent decision of the United Nations Educational, Scientific and Cultural Organization’s (Unesco) to reclassify the Ampautan massacre as “ongoing/unresolved.”
Palabay said the Duterte administration is attempting to use the convictions in the Ampatuan case to “allay calls for an independent and impartial international investigative mechanism into the human rights situation in the Philippines.”

The Ampatuan case was classified as resolved in the Unesco Observatory of Killed Journalists, which prompted various concerned groups and families of the victims to write an appeal to Unesco Director General Audrey Azoulay last Sept. 12.

Unesco Deputy Director-General Xing Qu responded to the letter and reclassified the case as “ongoing/unresolved.”

“This regime’s spin doctors have already paraded the case as supposed ‘proof’ that domestic mechanisms to seek accountability on attacks on journalists and on human rights violations in general are working — this despite all evidence strongly suggesting that impunity continues,” Palabay said.

She said the conviction of the perpetrators of the massacre on Dec. 19, 2019 is due to the unwavering campaign for justice of the families of the victims, journalists and rights advocates.

Palabay added that the case is far from resolved as the “Ampatuans have appealed their conviction, nearly 80 suspects remain at large, and attacks on journalists and press freedom in the Philippines continue and are worsening under the Duterte administration, contrary to the government’s own claims.”