‘Injustice led to the death of Baby River’ 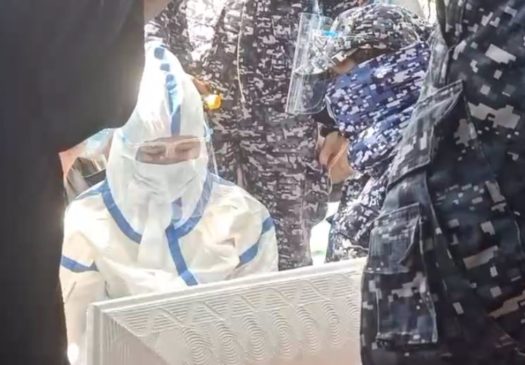 This is the opinion expressed by experts in a recent online forum organized by the Health Alliance for Human Rights titled Etiology of Baby River’s Death: A Cause for National Concern.

Nasino’s counsel, Katherine Panguban of the National Union of Peoples’ Lawyers said that baby River Emmanuelle did not simply die of pneumonia but of the prevailing injustice in the country.

Panguban said that Nasino was arrested on the basis of a shady search warrant, and detained over trumped-up charges.

“If not for the questionable search warrant, Reina could not have been in prison,” she explained adding that if injustice was not done on Nasino, River could have been alive.

Nasino, an urban poor organizer of Kadamay, was arrested together with Ram Carlo Bautista of Bagong Alyansang Makabayan (Bayan) – Manila and Alma Moran of Manila Workers Unity on November 5 last year based on a search warrant issued by Executive Judge Cecilyn Burgos-Villavert of Quezon City Regional Trial Court Branch 89. Villavert is the judge who issued the search warrants for the raids in Bacolod City, Escalante City and Manila which led to the arrest of 59 activists.

Obstetrician-gynecologist Sylvia Dela Paz, an honorary consultant of Dr. Jose Fabella Memorial Hospital said that River would not have died if her mother was given adequate prenatal care.

Panguban said that Nasino learned of her pregnancy only after undergoing the medical procedures for her transfer to Manila City Jail.

“That was the first and last time that she was seen by a specialist. There was no follow-up check-up until she delivered the baby last July,” said Panguban.

Despite being born full term, River was underweight at 5.5 pounds (2 kilograms). River also had jaundice and had to be placed under ultraviolet light.

Dela Paz said that the stress that the baby had to go through would have been prevented if Nasino was not deprived of adequate care during her pregnancy.

“It could have been detected and the doctor could have helped to increase the weight of the fetus,” she said, adding that Fabella is near the Manila City Jail.

Dela Paz said that underweight infants are highly prone to contracting infections, the reason why breastfeeding, which has been proven to increase the immunity of newborn babies, is important.

Nona Andaya-Castillo, an international board certified lactation consultant, said that a teaspoon of breast milk contains three million germ-killing cells. This is why it would have been crucial for River to receive her mother’s milk in the first six months of life. Unfortunately, River was deprived of this.

One of the instructions of the hospital is to breastfeed the baby exclusively and on demand. For this reason, Nasino’s lawyers filed two motions before the court for her to have custody of the baby, either in the hospital or in a nursing facility inside the prison.

Both motions were denied. Manila City Jail Female Dorm Officer-in-Charge Ignacia Monteron said that this is because of the lack of personnel to escort Nasino to the hospital for 12 months and that the prison has no nursing facility.

In addition, Monteron simply brushed off the requests of Nasino for a lavatory for handwashing, refrigerator or cooling equipment for storage of breastmilk, and electrical outlets for breast pumps, instead referring her to make the request to the local government unit or to the appropriate government agency.

However, Panguban said that under the Republic Act 10028 or the Expanded Breastfeeding Promotion Act of 2009, public and private institutions are required to have such facility for breastfeeding mothers.

“The lactation stations shall be adequately provided with the necessary equipment and facilities, such as: lavatory for hand-washing, unless there is an easily-accessible lavatory nearby; refrigeration or appropriate cooling facilities for storing expressed breastmilk; electrical outlets for breast pumps; a small table; comfortable seats; and other items,” section 11 of the law states.

Panguban said that even the Bureau of Jail Management and Penology’s Memorandum Circular No. 2010-02, allowing for infants to be with their mother for only one month, violates the law on breastfeeding.

“This also violates the right to life and right to health of the infant of the incarcerated mothers,” she said.

In addition, the Bangkok Rules, or the United Nations Rules for the Treatment of Women Prisoners and Non-custodial Measures for Women Offenders, guarantees the rights of mothers to breastfeed their babies.

Particularly, Rule 5 of the document requires for facilities and materials needed by pregnant, breastfeeding, and menstruating women prisoners to be provided by the prison facility. Rule 49 also states that the best interest of the child should be the basis of decisions in allowing children to stay with their mother in prison.

Panguban said it was the jail authorities who told Nasino to bottle-feed her daughter since the baby was not getting enough milk. “She thought that she was not producing milk,” said Panguban.

But Castillo said this is not a problem. “She just needed help in breastfeeding her baby,” said Andaya-Castillo, adding that giving baby formula milk is never an option.

She said that she had been calling Nasino to help her in breastfeeding since she was a first time mother. She emphasized the need to help and educate mothers in breastfeeding their child to avoid circumstances such as death.

“Depriving River of her mother’s breast milk is such an injustice,” she said.

Panguban said that the fact that it is the jail authorities who advised Nasino to bottle-feed baby River only showed that the institution itself does not provide adequate support and education on breastfeeding.

Andaya-Castillo clarified that the caregiver is not at fault when River contracted pneumonia, rather, she believed that the giving of formula instead of breastmilk from Nasino aggravated the baby’s frail health condition.

“Formula milk is not sterile. It also has antibiotic residue that could lead to a child’s resistance to respond to antibiotics. This could be the reason why River’s body had not responded to antibiotics when she was ill,” Andaya-Castillo said.

The death of baby River, however is only part of the problem that Nasino had to face. Dela Paz said that because of her experiences in prison, she is highly at risk of having postpartum depression.

“She had suffered many losses. She lost her liberty and her daughter. She must be given a chance to talk to others,” Dela Paz said.

To prevent this, Dela Paz said it is important that people around her know the red flags for PPD, which includes loss of sleep or appetite or severe sadness. Psychological first aid is needed if these signs manifest on Nasino.

Meanwhile, Panguban said they were able to talk to Nasino but through speaker phones. Jail authorities insist that because of Nasino’s case, she needs to be guarded even when taking calls from her lawyers.

This violates the right of Nasino to confer privately with her lawyers since prison guards can eavesdrop on their conversation, Panguban said.

Mercy Castro, a health worker and former Morong 43 detainee said they too experienced inhumane conditions during their pregnancy in prison.

During their detention, Castro only had two prenatal check-ups. At Camp Bagong Diwa, she said, their cell was too narrow and had poor ventilation and food was not suited for pregnant mothers as it was oily or too salty.

Castro and another health worker, Carina Judilyn Oliveros gave birth at the Philippine General Hospital and were put under hospital arrest for months until then President Benigno Aquino III announced on international human rights day the dropping of charges against the 43 health workers.

But Castro said they fought for their right to be with their children. Like Nasino, they also appealed in court to allow them to breastfeed and be with their newborn.

“This would not be possible if we did not assert our right,” said Castro.

Dela Paz lamented that only poor prisoners experience this kind of inhumane treatment. She called for the release of Nasino given that the circumstances of her arrest were questionable.

“We should amplify our call to release all political prisoners and an end to inhumane treatment of prisoners nationwide,” Dela Paz said.

She said that River’s death should be the last because “it pains us to see this inhumanity against women and their children.”