MANILA – Various women groups joined the annual One Billion Rising yesterday at the University of the Philippines, calling for an end to hunger and abuses.

“Across the planet, the majority of front line workers, health care workers, home care workers, domestic workers, and farmworkers are women. Like the Earth, they are the least valued and protected,” the One Billion Rising organizers said in a statement.

In the Philippines, the global event One Billion Rising, with the theme “Rising Garden,” was held at the Amphitheater of UP Diliman, Feb. 14. Participants also exchanged seedlings to signify their call for food sovereignty and their demands for due cash assistance in the face of the continuing impacts of the pandemic on their jobs and livelihood.

In a statement, One Billion Rising said this year’s “Rising Garden” theme is a reminder of how people are connected to “life, to each other, and to Earth, which compels us to do everything in our power to protect and nurture life and all that is sacred without doing harm.”

The annual One Billion Rising began in 2012 and has since put a spotlight on the abuses and exploitation that women and girls around the world are being subjected to.

ATM: Women’s group hold One Billion Rising to call for rights, food and job security in the time of the pandemic, and to denounce systemic misogyny and fascism that violate women’s democratic rights. pic.twitter.com/iTLKZwWrlY

“The spread of the coronavirus has exposed and worsened inadequacies in the delivery of public health and social services in a neoliberal economic system. The militarized lockdown, one of the longest and harshest in the world, has caused an unprecedented crisis, with millions out of work and deprived of livelihood, small businesses on the brink of collapse, and the poor forced out of their communities due to the series of demolitions,” GABRIELA Secretary General Joms Salvador said.

The event also highlighted how cultivating community gardens is a form of resistance in the face of increased hunger that many vulnerable communities are experiencing.

Women peasant group Amihan said they joined the dance protest to renew their long-standing demands for free land distribution and in putting an end to the land monopoly control of big landlords and businesses that hinders the country’s food security.

Even before the Duterte administration, Amihan Chairperson Zenaida Soriano said they have been advancing the role of peasant women in cultivating “bungkalan” or communal farms.

However, such initiatives have been met with violence, with their farms and produce being destroyed and confiscated, respectively. Farmers are also being harassed, and worse killed.

Globally, food shortages, famine, and starvation have swept many vulnerable communities as the world grapple with the COVID-19 pandemic. The World Food Program said in a November 2020 statement that at least 690 million people do not have enough to eat, while 130 million are at risk of being pushed to starvation by the end of last year.

“Hunger is an outrage in a world of plenty. An empty stomach is a gaping hole in the heart of a society,” said United Nations Secretary-General Antonio Guterres.

The Philippines, however, is not spared.

Ibon Foundation noted the increasing prices of basic goods and services in the face of falling jobs and incomes during the pandemic. Government data revealed that inflation rate last month was at 4.2 percent, which is higher than the previous two years. 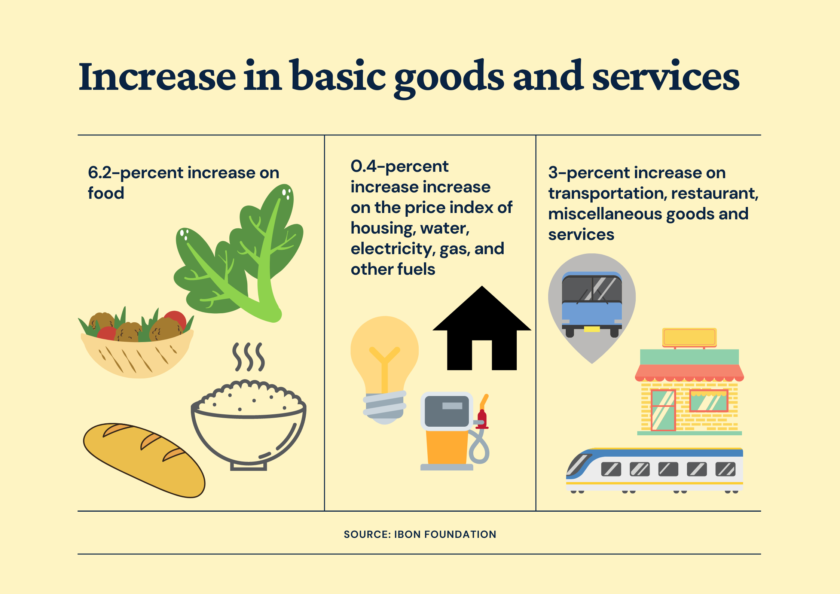 The research group recommended that the Philippine government must provide new cash subsidies until jobs and livelihoods are recovered, amounting to P10,000 ($208) monthly for the poorest 75 percent or about 18 million families.

However, the Duterte administration has decreased its allocation for emergency subsidies from P237.5 billion ($4.9 billion) in the first COVID-19 response law to P22.5 billion ($468.2 million) in the second. There are also no financial subsidies allocated in the 2021 government budget.

Salvador said, “despite the state’s vicious machinations to silence the growing resistance against Duterte’s fascist regime, women will not back down. We invite the broad masses here and abroad to join us as we intensify our call for accessible health services, livelihood, and justice amid the pandemic and worsening economic crisis.”