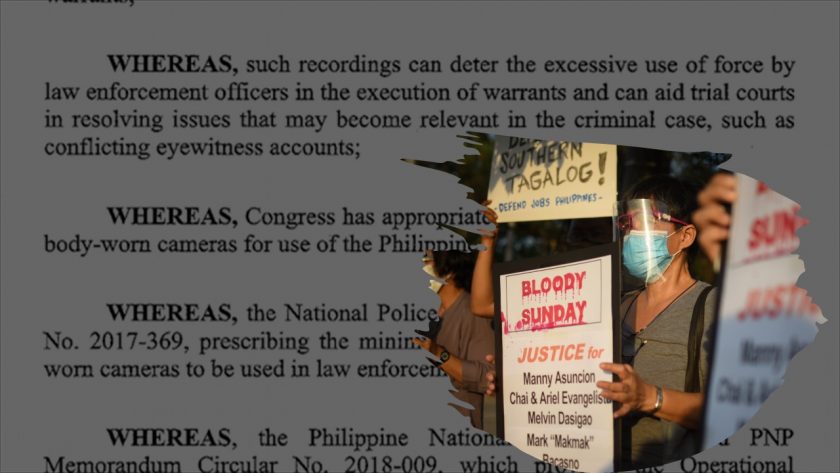 MANILA — A human rights group is urging the review of cases of political prisoners arrested over trumped up charges in light of the recently-released resolution of the Supreme Court requiring the use of body-worn cameras when serving search warrants as complaints of rights abuses mount.

The Supreme Court issued Administrative Matter No. 21-06-08-SC on June 29, stating that the use of at least one body-worn camera and one alternative recording device can reveal the circumstances surrounding the execution of warrants. In case of unavailability of body cameras, law officers shall file an ex parte motion to the court to be allowed to use alternative devices for justifiable reasons.

“Such recordings can deter the excessive use of force by law enforcement officers in the execution of warrants and can aid trial courts in resolving issues that may become relevant in the criminal cases, such as conflicting eyewitness accounts,” the resolution reads.

With the recent guidelines on the use of body cameras in serving warrants, rights group Kapatid said it is logical for the high court to pursue the release of all political prisoners “who are the direct victims of these judges’ wrongful and culpable actions.”

“For accountability and justice to hold sway, we press that a review be made of all cases that emanated from the sala of those judges who turned their courts into a search warrant factory that led to the arrest and outright killing of activists. Start off with Judge Cecilyn Burgos Villavert and down the line,” said Kapatid Spokesperson Fides Lim.

Progressive groups have long assailed the use of judicial orders against activists who were red-tagged by the administration. Some of these police operations led to killings, with state forces claiming that the victims fought back.

These include the crackdown in Southern Tagalog, dubbed as Bloody Sunday, that left nine activists killed and six arrested in simultaneous police raids on March 7. This happened two days after President Rodrigo Duterte issued yet another kill order to finish off communist fighters in the Philippines.

A win, but gaps remain

In a statement, the National Union of Peoples’ Lawyers said they are grateful and appreciative of the responsive action of the high court.

“Generally, it is grounded on abundant experience and appears to have taken into account the clamor to address the situations that arise in rights violations,” NUPL President Edre Olalia said.

He noted that the resolution incorporated provisions similar to NUPL’s recommendations such as the submission of recordings during inquest proceedings, limiting the scope of courts within the judicial region, to name a few.

The high court also removed the power provided to executive judges of Quezon City and Manila regional trial courts to issue search warrants that may be served anywhere in the country. This so-called “roving warrant” was used against at least 60 activists arrested both in Negros and Metro Manila in 2019 – among them was Reina Mae Nacino, whose baby died while she was in detention.

“The executive judges and vice executive judges concerned shall issue the [search] warrants, if justified, which may be served in places outside the territorial jurisdiction but within the judicial regions of these courts,” the high court’s guidelines on use of body camera states.

Instead, executive judges in Quezon City and Manila are only allowed to issue warrants within their judicial regions, or in the National Capital Region.

However, Olalia said “some provisions may unwittingly provide gaps, loopholes, and opportunities for circumvention on the ground, including “opening the option of failing to use the devices on reasonable grounds” and “non-liability in case of purported ignorance of malfunction.”

Its Section 5, Rule 2 on arrest warrants reads, “failure to observe the requirement of using body-worn cameras or alternative recording device shall not render the arrest unlawful or render the evidence obtained inadmissible. Facts surrounding the arrest may be proved by the testimonies of the arresting officers, the person arrested, and other witnesses to the arrest.”

A similar rule is applied in the implementation of search warrants as stated in Section 7, Rule 3 but is stricter on law enforcement where failure to observe the requirement of using body-worn cameras or alternative recording devices, without reasonable grounds, shall render the evidence obtained inadmissible for the prosecution.

In both arrest and search warrants, the rule stated that liability for contempt of court shall not apply if the body-worn cameras malfunctioned and the officers were not aware of the malfunction prior to the incident.

Olalia also raised concerns over the very limited number of minimum mandatory recording devices required as it relies on a subjective determination.

Section 2, Rule 2 stated that the body cams shall be activated as soon as the officers arrive at the place of arrest and shall be deactivated only if the subject has been taken into custody.

This also opens a “possible dispute” as to when to activate the devices.

The NUPL said they will be on the lookout for how these guidelines will be implemented on the ground.

“At all events, the proof of the pudding is in the eating, so to speak, and we shall continue to actively cooperate, recommend and even call out as these welcome reforms are tested out there on the ground,” Olalia said.

He added, “after all, it is not only a matter of trust and presumptions, but ultimately a matter of experience,” he added. (JJE, RVO)