‘Resisting Tyranny’ | A trail of blood: Duterte’s relationship with CARHRIHL 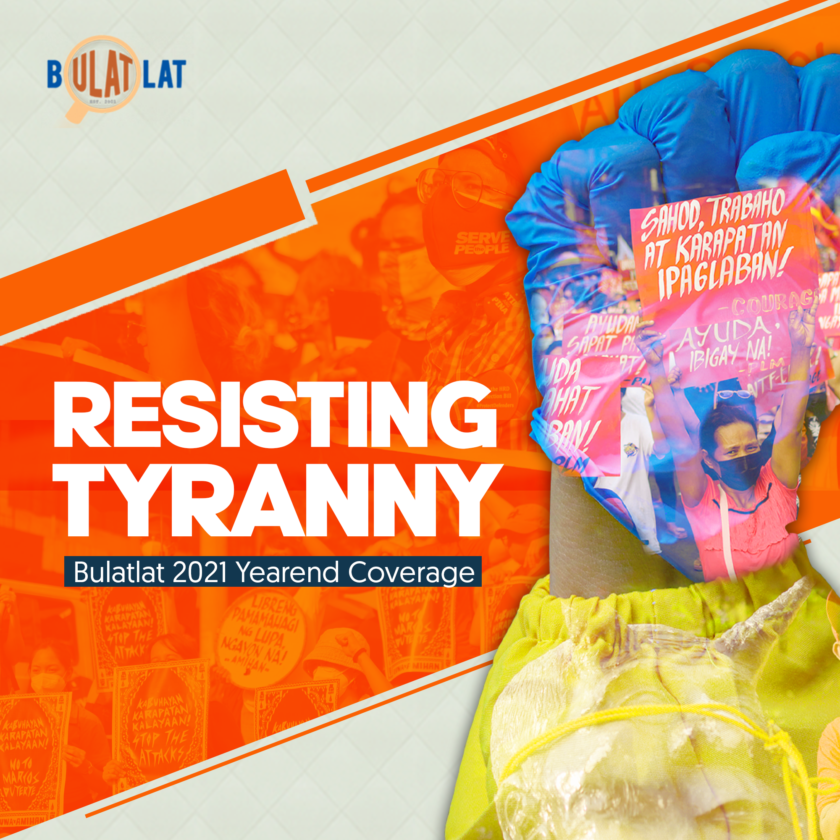 SANTA CRUZ, Laguna – From December 2020 to December 2021, there have been at least 29,782 human rights violations, or an average of 82 per day, committed by state forces of the Rodrigo Duterte administration.

A significant number of these stem from the armed conflict between the Philippine government and the Communist Party of the Philippines, which celebrated its 53rd founding anniversary last December 26. Despite the existence of the Comprehensive Agreement on the Respect for Human Rights and International Humanitarian Law (CARHRIHL), an agreement signed by both parties in 1998, rights violations rooted in the armed conflict occur regularly.

Rights organizations like Karapatan have noted particular instances of CARHRIHL violations over the course of the year. A number of these are the direct result of clashes between the Armed Forces of the Philippines and the New People’s Army. Almost all of the violations, however, were perpetrated by the AFP.

At least 15 of the NPA fighters killed by state forces were reported as hors de combat or unable to fight. The remaining fighters suffered desecration of remains and/or refusal to return the remains to their loved ones.

In a recent example, Floreta “Ka Kelly” Ceballos and her companion Wilfredo Fuentes were reported as killed in an encounter near Himamaylan, Negros Oriental last December 14. NPA-Negros disputed this, alleging that the two were abducted on December 9 and tortured. Reports from the NPA indicated that Ceballos sustained “neck trauma, stab wounds in the chest and lacerations in her arms,” while Fuentes also showed signs of torture.

According to the NPA, Ceballos was unarmed and was in no position to engage in combat at the time of her abduction.

Not even “high profile targets” were exempt from suffering CARHRIHL violations. Last October 29, Jorge “Ka Oris” Madlos, spokesperson of the New People’s Army and member of its National Operations Command, was killed alongside a companion in Impasug-ong, Bukidnon. The military claimed that Madlos was a casualty in an armed encounter, but the NDF countered these claims, asserting that he was on his way to a regular check-up and treatment.

In at least one instance, NPA fighters were denied their rights as prisoners of war after their capture by state forces. On December 11, Justine Kate Raca was forced to surrender after an encounter with state forces in barangay Tinitian, Roxas, Palawan resulted in the death of one companion. According to Karapatan Southern Tagalog, Raca’s rights as a prisoner of war are being violated by virtue of her being held in a marine camp with no charges filed against her.

Raca’s slain companion, Remil Padilla Rodriguez, was meanwhile reported to have already surrendered before he was shot dead, according to eyewitness accounts collected by Karapatan ST.

Biggest impact is on civilians

By far, however, most victims of the armed conflict are civilians in the countryside. This year alone, there have been at least 24 incidents of military bombardment, 13 incidents of shelling, and 11 cases of strafing by military aircraft over peasant communities across the country. At least 21,376 civilians were reported to have been forced to evacuate due to these incidents, with at least 15,000 internal refugees coming from the Southern Tagalog region. 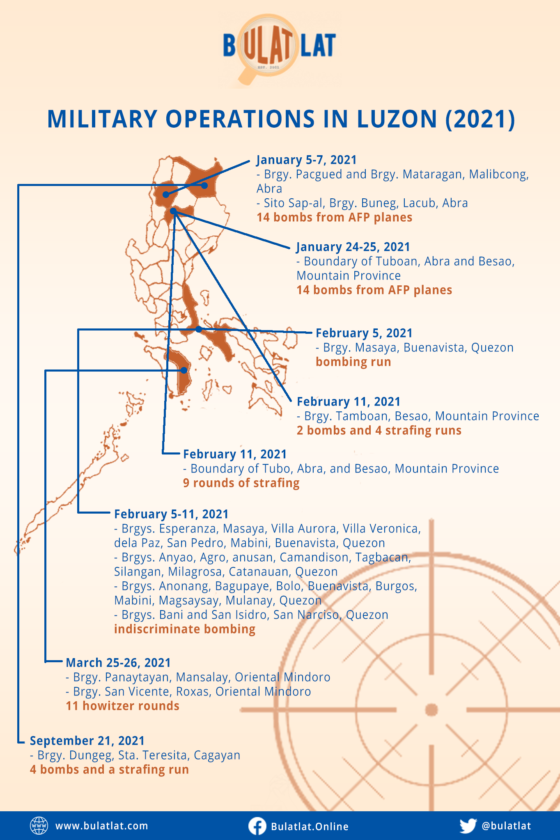 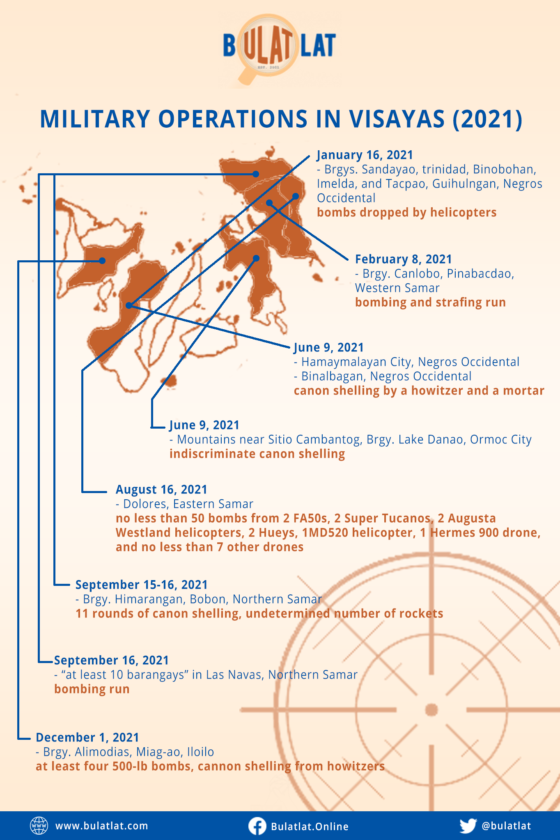 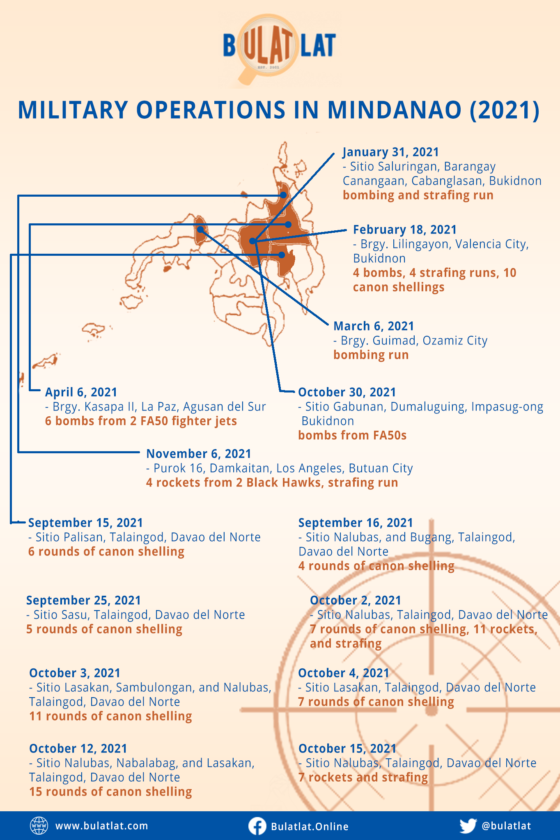 In more than one instance, the bombing runs resulted in widespread destruction of the environment. On October 30, for example, the forests surrounding sitio Gabunan in barangay Dumalaguing, Impasug-ong, Bukidnon were destroyed after the AFP’s FA-50 fighter jets dropped bombs in the area. The bombing coincided with the military’s reports of Ka Oris’s death in a supposed clash.

Aside from these bombings, the military conducted at least 488 combat operations against the NPA across 69 provinces of the country this year alone. Although some of these operations resulted in encounters between the AFP and the NPA, these also resulted in the deaths or arrests of several civilians who were subsequently tagged as “NPA fighters” or “NPA sympathizers.”

These incidents have spilled over to the cities and can be seen through Duterte’s heavy-handed approach to dealing with activism. At least 40 civilians were victims of extr-judicial killings, including nine mass leaders across the Southern Tagalog region last March 7, dubbed ‘Bloody Sunday.’

In urban centers, violations of CARHRIHL are fueled by a lack of distinction between progressive and revolutionary forces. Since December 2018, Duterte has made it official policy to tag progressive organizations as ‘fronts’ of the CPP-NPA-NDF, via the National Task Force to End the Local Communist Armed Conflict. NTF-ELCAC statements have made it clear that it actively “red tags” progressives and their organizations, under the belief that they are actually communists.

Despite legal instruments like the Commission on Human Rights and CARHRIHL, the armed conflict between the AFP and the NPA still operates in a gray area, leading to lapses and abuse at the cost of civilian lives.
The roots stem in the Philippine government’s refusal to recognize the NDFP as representing a belligerent state. Its insistence on tagging the CPP-NPA-NDFP as ‘terrorists’ means that institutions and legal instruments like CARHRIHL become ineffective in policing violations in the armed conflict.

It also bogs down questions of human rights under layers of nit-picking on the AFP and the NPA’s individual actions. Neither side can reach an agreement on what constitutes a ‘valid’ target in their civil war. The NPA is frequently tasked to justify itself against the AFP’s claims of “terrorism.”

Although CARHRIHL has provisions put in place to investigate and punish human rights violations committed in the course of the conflict, the agreement in itself still has little bite in terms of actual enforcement. For example, the Philippine government stopped maintaining a Joint Monitoring Committee for CARHRIHL violations, despite signing an agreement to do so. Recently, the Department of Interior and Local Government issued a statement effectively stating that it does not recognize CARHRIHL, calling it “just an agreement.”

On the other hand, the NDFP considers CARHRIHL “a step forward in the direction of negotiating a just peace between the two parties.” It continues to maintain its side of the JMC and continues to push for the continuation of the GRP-NDFP peace talks.

A big question coming into the 2022 elections is how it will impact the armed conflict. None of the major candidates have yet to make substantial commitments to peace talks or to upholding CARHRIHL. There is still hope, though, that things might change in the months leading up to May. (RVO)