Question Everything | Keywords, sound bites, and newsmakers of 2022

Since this was an election year, the most notable newsmakers were presidential candidates led by the frontrunners Ferdinand ‘Bongbong’ Marcos Jr. and Leni Robredo. Decades or even years from now, historians will also recall the historic candidacy of labor leader Leody de Guzman.

The rapid spread of the Omicron variant in January revived lockdown measures across the world. It further delayed the reopening of face-to-face classes as schools adopted a hybrid teaching model. Booster shots were given but they proved inadequate in reversing the flawed and grossly anti-poor pandemic response of the Rodrigo Duterte administration. Marcos vowed to ditch the lockdown approach but he showed equal incompetence in managing a public health crisis by refusing to appoint a permanent Health secretary.

The country’s polarized political landscape was reflected during the campaign period. Kakampinks were impressive in manifesting their visible support for the Robredo-Pangilinan tandem, but disinformation-enabled automated magic delivered 31 million votes for Marcos-Duterte. 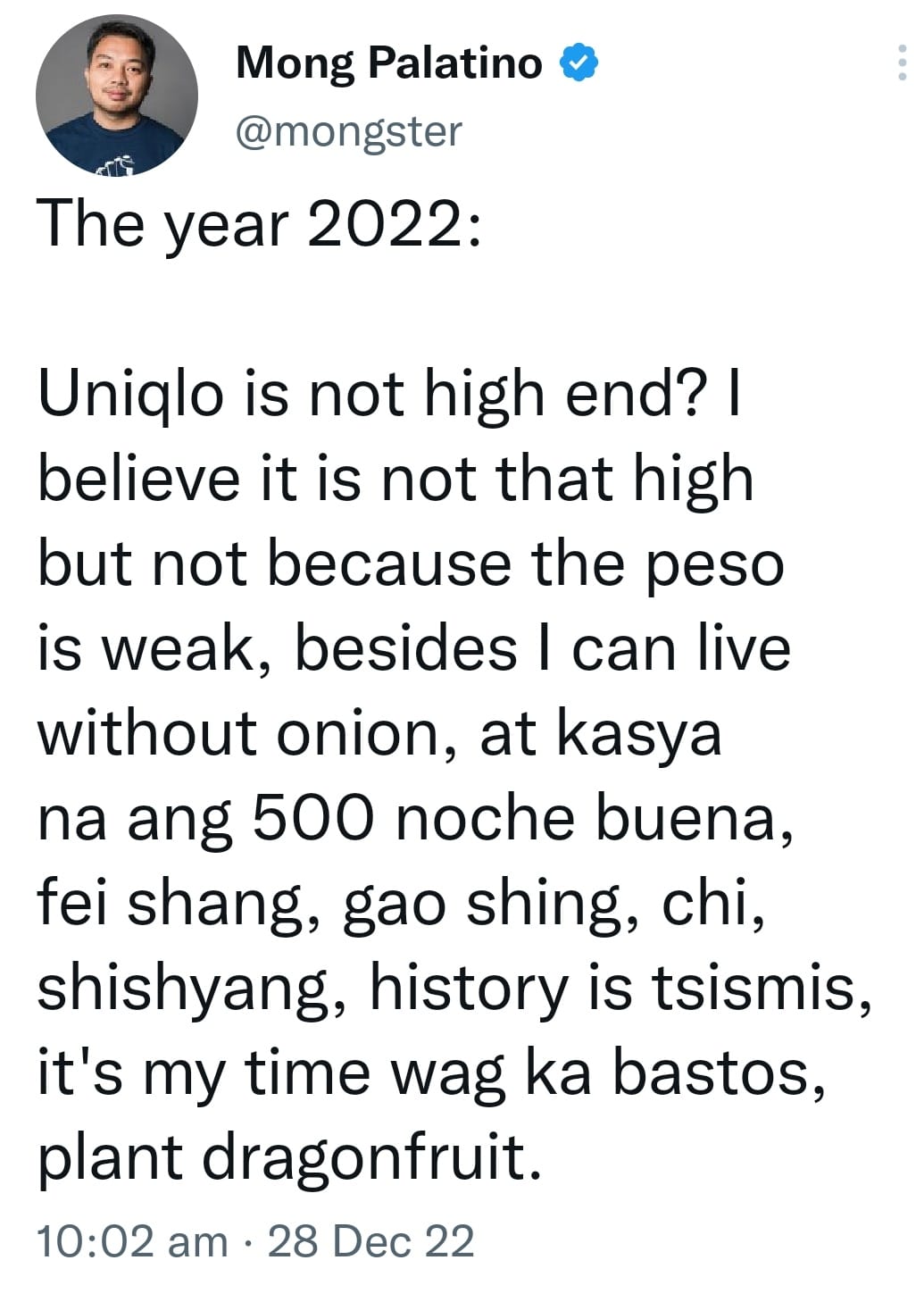 The new government and its troll apologists have consistently bragged about the supposedly high approval ratings of Marcos, but they proved meaningless when the country was plagued by runaway inflation and the resulting wage erosion. The peso-dollar exchange rate almost breached 56 pesos, inflation reached 7.7 percent, and the absurdly high price of onion (sibuyas) became the symbol of the rising cost of living. But Marcos logic insisted that “the peso is weak because the dollar is strong.”

Instead of empathizing with their constituents, politicians chose to normalize callousness. “I believe it is not that high” was Marcos’s tone-deaf response to the media when asked about the surging food and fuel prices. This uninformed and insensitive remark was surpassed only by Senator Cynthia Villar’s “I can live without onion” statement. It is unclear whether the 500 pesos Noche Buena grocery list of the Department of Trade and Industry included enough onions.

To solve hunger, a party list congressman inquired about the use of astronaut pill, the president’s son mansplained the benefits of planting dragonfruit, and the president’s sister enjoined the public to share her nostalgia for nutribun.

When he took his oath, Marcos assured the people that he is ready to serve. “Ang pangarap ninyo ay pangarap ko.” (Your dreams are also my dreams.) He preached unity even if he failed to stop his own party and former executive secretary from hurling vicious accusations against each other. He promised to bring down the price of rice to twenty pesos (bente pesos na bigas) although he later admitted that it will take at least three years to do this.

Soon, it became evident that the government doesn’t have enough resources for social service programs. Unless of course, the item is similar to the 150 million pesos in confidential intelligence funds of the Department of Education. It is the same agency that allowed former Palace officials to purchase overpriced laptops that cost 58,000 pesos for each item.

To raise funds, Marcos’s ingenious directive is to legislate the creation of a Maharlika Investment Fund by pooling state resources. Not included in the fund resources are the 203 billion pesos in estate taxes and the remaining ill-gotten wealth that his family needs to settle with the national treasury. They should at least come clean about the bill of Imelda’s 93th birthday (the text on the giant billboard) bash in the Palace. Or the generous sponsors of Marcos’ Singapore getaway to watch the F1 race.

Marcos attended several high-profile global events but his presence (read: leadership) during emergency situations was inconsistent and unreliable. Thus, the trending question on social media: Nasaan ang Pangulo? (Where is the president?).

Typhoon Paeng threatened to wreak havoc in Luzon but the damage was minimized by the enormous blocking might of Sierra Madre. The Marcos government responded by green lighting the Kaliwa Dam project which will destroy the biodiverse habitats in South Luzon aside from displacing the communities of indigenous peoples.

After half a year in power, the dictator’s son proved that he was no champion of human rights and freedom of expression. Impunity has persisted as evidenced in the killing of radio broadcaster Percy Lapid. Tokhang became Bida but extrajudicial killings did not stop. Red-tagging remains the de facto policy of the state in dealing with critics and activists despite the claim of the Justice secretary that it is only a term invented by the Left.

Vice President Sara Duterte was called a talawan for skipping debates during the campaign period. The same ‘talawan’ politician would exhort the youth to render military service and support the revival of mandatory ROTC. She articulated the government’s foreign policy with her viral “fei shang, gao shing, chi, shishyang” video message. She expressed her gratitude to the president for her helicopter transport service although she would later disown her own statement.

If we were to believe a young actress that “history is tsismis”, would we remember 2022 as a year dominated by disinformation peddlers? But there were also inspiring icons like Hidilyn Diaz who gave more sporting glories to the country. The death of revolutionary leader Jose Maria Sison shone a spotlight on the continuing struggle for real democracy and justice in this part of the world. And the most important lesson that reinvigorated the woke generation was the post-election reflection about the unfinished fight for good governance. “Pag ika’y namulat, di na muling pipikit.” Laban!

Mong Palatino is a blogger, activist, and former legislator. He can be reached via his email, mongpalatino@gmail.com