#NoGoldenEra | Food is now a luxury for low-income families 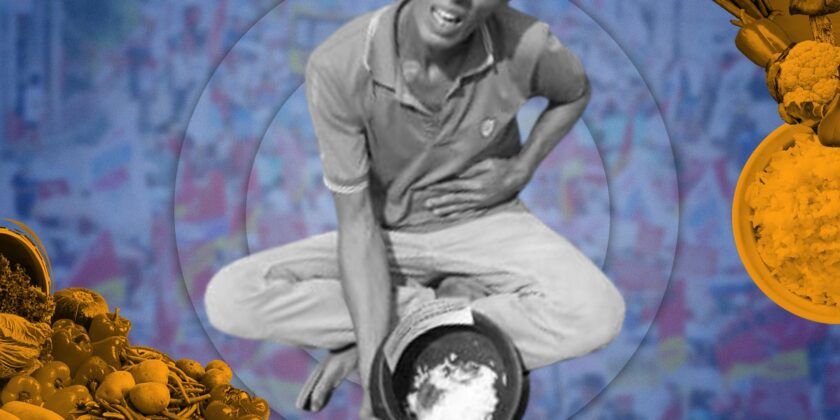 MANILA – Earning only an average of P300 a day, Beth De Ocampo and her husband barely earn enough to put food on the table.

“We would even cut down on rice sometimes,” De Ocampo, a small sari-sari store owner and mother of five, told Bulatlat, adding, “If there are leftover fish from my husband’s catch, we would eat that for dinner.”

De Ocampo’s husband, a fish vendor at Navotas City, works all day at the market only to earn a maximum of P500 a day.

“P500 a day is already generous, and it only happens when he catches more fish than usual, which happens rarely,” De Ocampo said.

“We just try to make do with whatever we earn, and be thrifty in everything we spend,” she added.

According to the Department of Labor and Employment, daily minimum wage in the National Capital Region is P570 as of June 2022.

Despite the inflation and the surging prices of basic commodities, there has been no increase in the daily minimum wage.

In the same month, onions in NCR markets were priced at P199 per kilogram, a P71-increase from 2021. Galunggong costs P244 per kilo from P233 last year. Vegetables were also not spared, like eggplants, which increased by P21 per kilo.

Data from the Philippine Statistics Authority revealed that food inflation rose to 10.3 percent in November from October’s 9.8 percent. This is primarily due to the higher annual growth of vegetables, tubers, and other produce, which capped off at 25.8 percent.

“The prices of goods are really sky high nowadays,” De Ocampo added, saying that she has to save every penny in order to feed her five children, two of whom are college students.

“We try to be as frugal as we possibly can, and try not to eat more than we should,” she said.

“Most families earn low wages compared to their daily expenses, when in fact, they need higher wages in accordance with the family living wage,” Mimi Doringo, Kadamay secretary general, told Bulatlat in a phone interview.

The Social Weather Station revealed that 2.9 million Filipino families experienced involuntary hunger or having nothing to eat from July to September 2022.

The majority of these families are from Metro Manila (16.3 percent), followed by Mindanao at 15 percent , the rest of Luzon at 9.6 percent, and lastly, Visayas at seven percent.

“Before, we could still manage to save money for food and other expenses, but now we can’t even save up any amount,” De Ocampo said.

“During the noche buena, our neighbors exchanged food in order to fill the table,” she said.

According to the World Food Programme Philippines (WFP), one out of 10 households experienced food insecurity in October 2022.

The Department of Science and Technology defines food insecurity as “the state in which people are at risk or actually suffering from inadequate consumption to meet nutritional requirements due to the physical unavailability of food, their lack of social or economic access to adequate food, and/or inadequate food utilization.”

WFP data revealed that 57 percent borrows money to buy food, 46 percent purchase food on credit, and 38 percent use their savings.

WFP reported that agricultural households have seen a significant reduction in income, which makes them more likely to resort to other coping strategies to address their hunger.

The Kilusang Magbubukid ng Pilipinas (KMP) stands firm that Filipinos’ hunger worsened through the years due to the severe crisis in agriculture. They said that Marcos’s platform of P20 rice and “suspension” of the Rice Tariffication Law remained as mere promises.

The administration launched the “Kadiwa ng Pasko” program in November, where they opened stores that sell cheaper commodities. The rice is priced at P25 per kilo, and sugar at P70 per kilo.

The Amihan National Federation of Peasant Women says that the P25 price for rice can be sustained if the Rice Tariffication Law is junked.

“The cheap rice can only bring down the prices of commercial rice if they are distributed to markets in a significant volume,” Amihan Secretary General, Cathy Estavillo shares in a statement.

“We can’t do this because it is against the law, that hinders us from the liberalization of rice importation and trading.”

According to KMP, the DA’s distribution of fertilizer discount vouchers were helpful, but not enough. Farmers also reiterated the call for the P15,000 production subsidy in order to buy necessary resources for their farms.

The government’s import-export dependency also adds a burden to local farmers, with Sandro Marcos’s suggestion to plant dragon fruit in place of palay, then ship it to Taiwan. However, Kadamay said that rice is still the primary food suited for Filipinos.

“Urban poor Filipinos have the hardest jobs. Construction workers, sidewalk vendors have to work all day in the heat and are prone to accidents. We know that rice is the best to keep us powered to work through the day,” Doringo explained.

“The government’s importation policies will only render the Filipino farmers helpless,” she added.

Former Executive Secretary Victor Rodriguez said that the President decided to take over the Department of Agriculture because he is “aware of the impending food price crisis and probably food supply crisis.”

“Attaining food self-sufficiency and security by seeking innovative solutions through the adoption of new technologies and enhanced connectivity to national, regional, and global value supply chains, this must be one of our utmost priorities in the region,” Marcos said during the 25th ASEAN Plus Three Summit in Phnom Penh, Cambodia last November 12.

However, with the recent Philippine data showing inflation peaking at eight percent, Marcos Jr. has described this to be “out of control”.

In a speech at the Arangkada Philippines forum in December, Marcos said his administration is already identifying the main causes of the 8-percent inflation rate.

“The main drivers of that inflation, unfortunately, are still imported — still imported inflation. So again, import substitution is still a good idea not only for foreign exchange reserves but also so that we can keep our inflation rate down,” Marcos said.

However, these plans remain unrealized as Filipino families remain burdened with the rising inflation every month.

For De Ocampo, the inaction of the government will only lead families to suffer.

“Everyone will suffer from extreme poverty if they don’t take any action,” De Ocampo says. “The government must provide solutions for these problems, instead of providing us with mere words.” (RTS, RVO)