Lamentations of Families of the Disappeared

Dee said she went to the Philippine Army, Philippine National Police (PNP) in San Jose, PNP in Cabanatuan City, PNP in San Fernando, and to the CHR. “Wala akong nakuhang tulong.” (I was not given any help.)

Dee said that the CHR in Region III just told her they have no funds.

After two months, Dee said that CHR investigators went to their house. A senator wrote to CHR to appeal for urgent action regarding the case of Honor and Johnny. Dee related, “Iimbestigahan daw nila ang kaso ng asawa ko. Sa akin hinahanap ang wtiness. Nagtago na ang witness, tricycle driver. Siyempre, takot din siya para sa buhay niya.” (They told me they would investigate the case of my husband. They asked me about the witness. The witness, a tricycle driver, already went into hiding. Of course, he fears for his life.)

The only thing that Honor left behind was his belt bag, said Dee. The police showed it to her but refused to give it to her.

Lorena said she also wrote to CHR asking for help. Until now, she has not received any reply.

Dee said that the most difficult to overcome is the feeling of helplessness. “Lahat ng pagtanungan mo, walang alam. PNP, Army, walang alam. Ni hindi kami nakapag-file ng kaso sa korte dahil wala kaming testigo, nagtago na ang testigo namin.” (Every one we asked claimed that they knew nothing. The PNP, the Army said they knew nothing. We could not even file a case in court because we have no witness. Our witness went into hiding.)

Lorena shared the same feeling. “Lahat ng pwedeng gawin, gagawin mo talaga pero bakit wala pa rin sila? Sa lahat ng pwedeng lapitan, sasabihin nila wala sa amin.” (I did everything that could be done but why are they still not here? We went everywhere but they all told us our loved ones were not in their custody.)

Lorena continued, “Sabi ng isang Isfap, hindi namin ginagawa ang mandukot. Ang sarap sabihin, sinungaling kayo.” (An Isafp agent claimed that they do not abduct people. I wanted to tell him, you are liars.) Isafp stands for Intelligence Service of the Armed Forces of the Philippines. 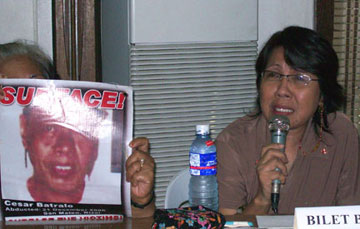 Bilet Batralo, youngest sister of Cesar Batralo, NDF consultant who was abducted Dec. 31, 2006, related that Cesar’sbilet batralo, desaperacidos daughter Gabriela who was then only four years old, dreams of becoming Darna (a superhero in Filipino comics) so that she could fly and look for her father. “Dadagitin daw niya ang mga kumuha sa tatay niya.” (She said she would snatch her father from his abductors.)

Bilet said when she started searching for her brother in military camps, she experienced different forms of harassment. “Nakaranas akong kasahan ng baril.” (I already know how it feels when soldiers cock their guns to try to scare you.)

Lorena also has to deal with guilt feelings. “Bakit hindi ko nahanap ang tatay ko? Mayroon ba akong hindi nagawa? Hindi pa ba ako maingay? Kailangan ba mas maingay pa ako para mahanap ko siya?” (Why can’t I find my father? Is there anything I failed do? Am I not generating enough noise about his abduction? Should I be more vocal to be able to find him?)

Jacqueline Ruiz, a psychologist said that the most difficult for those who search for their missing loved ones is the absence of closure.

Dee said, “Parang pakiramdam din ng namatayan eh, na wala na ang tao… kaya lang malupit dahil wala kang mabisitang libingan.” (It’s like that your loved has died, he is already gone…but this is harsh because you don’t have a tomb to visit.)

Ruiz said that they who search continue to hope that they will soon find their loved ones.

She added that relatives of the missing, while continuing their search, have to go on living. “Kailangang maging matatag para sa iba pang kaanak.” (We have to be strong for our other relatives.)

Ruiz said that a support group helps a lot in coping with difficult situations. She said that the knowledge that others are experiencing the same could provide strength.

Lorena said that every time she feels guilty, she talks with relatives of other disappeared persons. “They too did everything to search for their loved ones.”

For now, Lorena said they just have to continue searching and fighting for justice. She said that enforced disappearances would stop only if there would be a change in the societal system.

Dee said, “Hindi man makita, narito kami kung ano man ang pinangarap ng mga nawawala, may gingawa kami tungkol doon. Nandito pa rin sila kasi nandito kami.” (We may not be able to find them but we are here to continue what they have been dreaming of. We are doing something for their dream. It’s as if they are still here because we are here.) (Bulatlat.com)