Dr. Alexis Montes was wiping away his tears throughout the program on Feb. 3 organized by church workers who were involved in the campaign for the release of the Morong 43. It was evidently an emotional moment for him, less than two months after he and 32 others were released after 10 months in detention.

END_OF_DOCUMENT_TOKEN_TO_BE_REPLACED 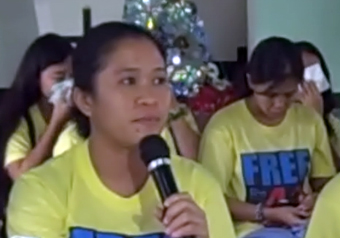 In these audio clips, Dr. Merry Mia Clamor, Angela Doloricon and Maria Teresa Quinawayan, three of the Morong 43, share their experience in detention, their longing for their respective families, their views of the human-rights situation in the Philippines and their desire for freedom.

Listen to the interviews

‘Beyond Morong 43, Aquino Needs to Prove Commitment to Human Rights’

Podcast: Morong 43 and What President Aquino Can Do to Uphold Human Rights