Shots shattered the evening calm as a peasant leader, Marcelino Beltran, went out of his house to greet some “visitors.” The visitors pumped bullets into his body and he died two hours later – the eighth to fall following the Nov. 16 massacre of seven farmers at Hacienda Luisita.

HACIENDA LUISITA, Tarlac City- It was about 9 p.m. of Dec. 8. With no electricity in the remote barangay (village) of San Sotero, Sta. Ignacia, Tarlac, the night was pitch dark.

Marcelino Beltran, 53, chairperson of the Alyansa ng Magbubukid sa Tarlac (Peasant Alliance in Tarlac), just had dinner with his family and was preparing things to bring for the next day’s nationwide peasant protest against the Hacienda Luisita massacre when dogs started barking in their yard.

Thinking that visitors have arrived, Beltran, a retired sergeant in the Philippine military before joining farmers groups, casually went out of the house to greet them.

What happened after that is narrated by his family. His son, 18-year-old Mark, told Bulatlat that he heard voices asking his father if he is indeed Marcelino. Mark scarcely heard his father’s reply when bursts of gunfire rang out, shattering the evening silence. 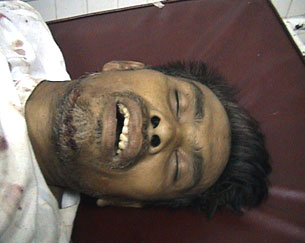 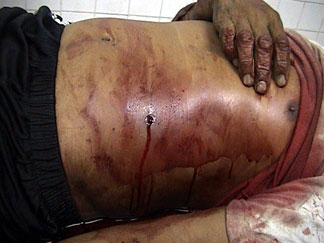 Slain Tarlac peasant leader Marcelino “Ka Marcing” Beltran, photographed as he lay dead at the Camiling District Hospital. He was shot to death on the eve of his birthday or two days before the 56th International Human Rights Day. A retired Army sergeant, he was set to testify on the trajectory of bullets in relation to the Nov. 16 Hacienda Luisita dispersal of striking workers when killed.

Dashing outside, Mark and his mother, Simeona, and the other children saw Beltran sprawled on theground, bloodied but still breathing, a mere 15 meters from the house.

Bleeding in the arms of his wife, Beltran was able to utter his final words in Ilokano: “Suldado daggidyay nagpaltog” (Soldiers did the shooting).

Family members recount that as they were on board a tricycle to bring Beltran to the Camiling District Hospital kilometers away, armed men in fatigue uniform accosted them and asked whether the patient they were carrying was Beltran. Fearing for their safety, they answered “no.” Those who had shot Beltran were leaving no chance, the beleaguered family thought.

Beltran died two hours after the shooting and he never even reached the hospital. He was the eighth farmer to fall following the Hacienda Luisita massacre that claimed the lives of seven striking workers.

Reporters covering the police beat that night were told by authorities that Beltran’s family had given a statement saying the military was in no way involved in the killing. 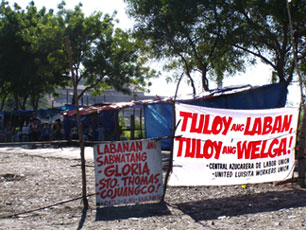 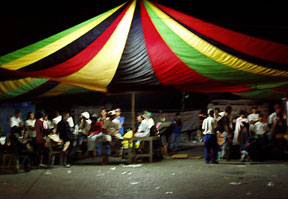 Asked about the supposed statement, Mark said in disbelief, “Why do they twist our words? I told them that my father told us soldiers shot him. Why would they lie?”

The answer may be found in Hacienda Luisita, the vast sugar plantation in this city owned by the family of former president Corazon Cojuangco Aquino, where on Nov. 16, at the picket line of striking workers, at least seven people were killed and scores wounded as nearly a thousand elements of the 69th IB, PA and the Philippine National Police moved to break the strike. The enforcers used water cannons, truncheons, tear gas and, the striking workers said, bullets. More than 100 striking workers were also arrested.

Several vehicles, motorbikes, and bicycles, as well as foodstuffs and personal belongings of protesters were either destroyed or confiscated by the soldiers and police minutes after the shooting.

The massacre has been attributed to directives by Labor Secretary Patricia Sto. Tomas for the police and military to enforce her “return to work” order, hence, to break the picketline.

Beltran, a key witness in the Senate and House investigations on the Nov. 16 carnage, was scheduled to appear in the final hearings in Metro Manila on Dec. 13 and 14 to testify on the ballistics aspects of the case: guns and bullets used, bullet trajectories, and the like.

As chair of the provincial chapter of the Kilusang Magbubukid ng Pilipinas (KMP or Peasant Movement in the Philippines) and vice chair of AnakPawis (toiling masses) in Tarlac, he was active at the picket line in the hacienda from Day 1 of the strike. He also looked after the welfare of the union members and their families and, more so, in the investigation to prosecute the perpetrators of the massacre.

A tenant farmer in his barangay, some 30 kms west of the hacienda, Beltran was deeply involved in a land dispute with the landlord at the time of his death. Friends say that the bitter land dispute is enough reason for his murder. But all agree that the immediate cause of his death is his support for the plantation and sugar mill workers in Hacienda Luisita. (Bulatlat.com)