UP Increases Tuition by 300 percent

“And UP will have really lost its character, and soul, as a State University,” said Faculty Regent Roland Simbulan in his dissenting vote to the tuition increase. And lost it did.

“And UP will have really lost its character, and soul, as a State University,” said Faculty Regent Roland Simbulan in his dissenting vote to the tuition increase. And lost it did.

The Board of Regents (BOR), the highest policy-making body of the University of the Philippines (UP), approved unanimously to raise the cost per unit by 300 percent as well as its miscellaneous fees. The BOR voted 7-0 in favor of the tuition increase, even though the Student Regent and Faculty Regent were not included in the deliberations. The said regents are the only BOR members elected by their respective constituents, while the others are Malacañang appointees. 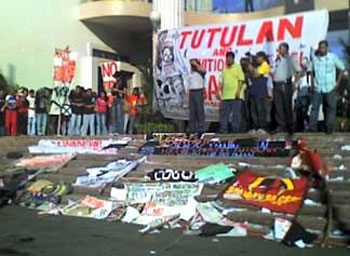 UP students, faculty and non-academic personnel block the entrances to Quezon Hall, the university’s admini9strative building, in the Dec. 15 protest against the 300-percent tuition increase (Photo by Reyna Mae Tabbada / bulatlat.com)

The BOR was set to vote on the tuition hike proposal yesterday (December 15) at the Quezon Hall in UP Diliman. Students gathered around the said venue and barricaded the doors to prevent the participants from getting inside, insisting that the deliberations be held in public. A table and several chairs were then set at the center of the lobby outside, where Faculty Regent Roland Simbulan and Student Regent Raffy Sanchez waited for the other members to arrive.

“I suggested that we defer the discussion of the proposed increases to next year in order to diffuse the tension surrounding the issue. And also to open up discussion,” Simbulan shared to Bulatlat. An open letter to the UP community from UP President Emerlinda Roman about the proposed tuition hike was circulated only last December 5.

When the appointed time of the meeting arrived, a letter from the Office of the Secretary of the University and of the Board of Regents was sent to Simbulan and Sanchez informing them that the BOR was “constrained to meet at the College of Law” in order “to prevent possible escalation of violence.” Also, the annual Lantern Parade was cancelled by UP Diliman Chancellor Sergio Cao but some colleges still went ahead in displaying their lanterns.

Students from the Diliman, Manila, Los Banos, and Pampanga campuses as well as members from other sectors in the university hooted in disagreement over the BOR decision. “Hindi po namin layunin ang manggulo dito,” (We are not here to create trouble) a student protester shouted.

In an interview with Bulatlat, Simbulan said that he will not attend the meeting at the College of Law since he wanted to open the discussion to the public. “Hindi kami magpapagamit doon,” (We would not allow them to use us) he said, referring to the fact that only he and Sanchez opposed the proposal.

The rest of the BOR offered to fetch Simbulan and Sanchez but they refused and stood their ground. Simbulan stayed at the Quezon Hall for a while with the students who were still barricading the doors. Sanchez led another convoy to the College of Law where the BOR meeting was taking place.

However, Sanchez was not allowed to participate. When he again faced the crowd massing up outside the said college, he announced that the BOR “railroaded” the decision by unanimously approving the implementation of the tuition hike. The protesters booed and attempted to storm the venue, but the rest of the BOR who voted 7-0 in favor of the increase had already left.

“Hindi nila tayo kayang harapin! “ (They cannot bring themselves to face us) Sanchez criticized his fellow regents who left in haste after the voting.

As the group from the Quezon Hall congregated with the protesters in front of the College of Law, Sanchez stood on top of a van announcing over the loud speaker the BOR’s decision.

The students and other members of the academic and employee unions then marched back to Quezon Hall, disseminating information on the approved increase. The protesters stopped twice to encourage other students to join their ranks and be part of the “expression of outrage” over the BOR’s verdict.

The protesters redirected traffic as they burned an effigy of Roman being manipulated by Gloria Macapagal-Arroyo. Students carrying their organization’s flags circled the bonfire as the rest of the group rendered songs of nationalism and ended with the university’s official song, “UP Naming Mahal” (UP Our Beloved), with clenched fists raised high in defiance.

When asked what the members of the BOR who voted for the increase should expect, Sanchez said, “Dapat maghanda na sila sa serye ng mga protesta lalo na sa pagsisimula ng bagong taon.” (They should be ready to face a series of protest actions especially at the beginning of the new year.) An invitation was extended to join in the prayer rally on December 17 to show defiance and anger over the tuition increases.

Even though Roman stated in her Open Letter that “one very important detail which protesting students often ignore is that the new fees will affect only new students, i.e., freshmen and transferees, who will enter UP in 2007,” Sanchez said that should not be the case.

He then highlighted three points why UP students oppose the tuition increase namely, social injustice, economic burden, and that it will change the character of the university. “The message is clear. Kailangan na nating makilahok,” (We need to now do our part) Sanchez said.(Bulatlat.com)