The world’s educators have called on their fellow educator, no less than President Gloria Macapagal-Arroyo, to end extrajudicial killings – the victims of which included nine teachers – and enforced disappearances.

“A good teacher leads by example.”

The world’s educators have called on their fellow teacher in the Philippines, no less than President Gloria Macapagal-Arroyo, to end extrajudicial killings – the victims of which included nine teachers – and enforced disappearances. Arroyo taught economic subjects at the Ateneo de Manila University, the University of the Philippines (UP), and Assumption College. 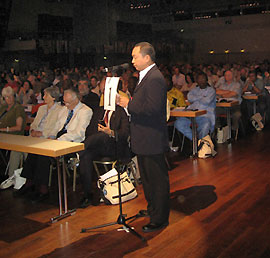 In an urgent resolution, the 5th World Congress of Education International called on the Arroyo administration to “immediately put a stop to extrajudicial killings and involuntary disappearances; investigate, prosecute, and punish those responsible for these acts; and ensure that its security forces respect the human rights and civil liberties of citizens.”

More than 1,700 delegates attended the congress held in Berlin, Germany from July 22 to 26, 2007. Education International is a global federation of teacher trade unions, with about 30 million members from more than 300 affiliated organizations in over 180 countries.

Two Filipino delegates from the Alliance of Concerned Teachers (ACT) and the Teachers’ Organization of the Philippines-Public Sector participated in the event. It is the ACT that moved for the adoption of the urgent resolution, which was unanimously approved by the body.

Urgent Resolution 6.06 titled “Situation in the Philippines” noted, “More than 1,000 activists fighting to uphold the rights and welfare of poor and oppressed Filipinos have been assassinated or made to disappear since President Gloria Arroyo took power in 2001,” and that “the victims include nine teachers, two of whom were national officers of the Alliance of Concerned Teachers, namely Vitoria Samonte and Napoleon Pornasdoro.”

Vitoria Samonte, a college professor in Surigao del Sur, was stabbed and killed by an unidentified man on Sept. 30, 2005. Napoleon Pornasdoro, a high school teacher in Quezon, was shot dead Feb. 27, 2006.

On Jan. 19, 2007, Prof. Jose Maria Cui was shot by motorcycle-riding assassins in front of his students at the University of Eastern Philippines in Catarman, Northern Samar.

The resolution also expressed “outrage that these gross human rights violations are carried out with impunity.”

Since Arroyo assumed power in 2001, 885 victims of extrajudicial killings and 183 cases of enforced disappearances have been documented by Karapatan (Alliance for the Advancement of People’s Rights).

In an address to the congress, ACT chairperson Antonio Tinio also decried the deployment of soldiers in Metro Manila’s urban poor communities and schools. He also condemned the new anti-terrorism law, the Human Security Act, which he said has “given this regime…a fearsome new weapon to further repress legal and democratic struggles.”

“The Philippine government, of course, denies any responsibility. In fact, it insists on using the term ‘unexplained killings,’ giving the impression that it is powerless to stop them. These killings and disappearances are carried out with impunity—no one has ever been arrested and punished,” Tinio addressed the delegates.

“Their message to Mrs. Arroyo is simple: stop the killings and disappearances now and put an end to impunity by punishing those responsible,” said Tinio, who has appealed for support and international pressure from the delegates of the educators’ congress. (Bulatlat.com)