Inaction, arrogance, and neglect were the responses of Philippine embassy officials to the pleas for assistance of OFWs in Kuwait and Saudi Arabia.

Philippine Embassy offices in other countries are expected to protect and give assistance to Filipino migrant workers especially those in distress. However, cases monitored by Migrante International showed otherwise.

In the early morning of August 4, Gil Lebria, coordinator of Migrante International chapter in Kuwait received a text message from a friend of a domestic helper asking for help and assistance. The son of the employer of the Filipino worker attempted to rape the latter.

Lebria immediately called the victim and spoke with her. He said that he would report the case to the Philippine Embassymigrants-neglect officials.

John Leonard Monterona, Migrante Middle East regional coordinator immediately wrote the office of Ambassador Ricardo Endaya via electronic mail about the said case. The next morning, Migrante also reported the case to the office of Philippine Embassy and Overseas Workers Welfares Administration (OWWA) based in Kuwait. 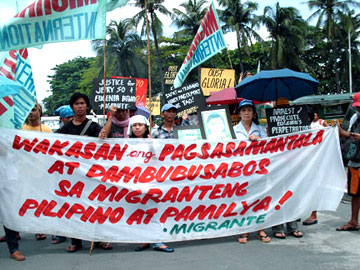 A day after the incident, the victim was able to get in touch with Welfare Officer Amy Crisostomo. Crisostomo told the victim that she could not do anything for her. On the same day, the victim received two anonymous calls.

One of the callers branded the victim as “stupid”. The other caller said, “You could not be rescued.”

Monterona called the numbers registered on the victim’s phone. He found out that the number 5346508 is the landline of the Philippine labor attache in Kuwait. The other number +9656018594 was answered by Glen Sayson, an employee of the Labor Office.

Monterona said, “Instead of providing assistance, Philippine government officials were the ones who castigated the victim.”

Maliam Guiamalon, a Muslim OFW from Maguindanao also sought the assistance of the Philippine Embassy in Kuwait, August 11.

She ran away from her employer for fear of being hurt. Guiamalon witnessed how her employer hit her Indonesian co-worker.

Upon her arrival in Kuwait City, Guiamalon called up the Philippine Embassy Office. Amy Crisostomo, welfare officer at the Embassy told her, “What are you going to do in the Embassy and for what purpose?” Guiamalon said Crisostomo had an arrogant tone.

Sotero Maza, an OFW from Calamba, Laguna has been deployed by his company to Hail, 1,000 kilometers North of Riyadh last December 10, 2007. He signed a contract as a heavy equipment operator with a monthly salary of US$300.

In April, Marza’s daughter Laurice sought the assistance of Migrante office in Quezon City. Her father has not received any salary for four months now.

Migrante International coordinated the case with their Middle East Chapter. On May 19, the local chapter of Migrante in Saudi Arabia endorsed Marza’s case to the Philippine Embassy in Riyadh.

The embassy replied, June 9, saying that the case of Marza has been referred to the Philippine Overseas Labor Office (POLO) in Riyadh for appropriate action.

On June 15, Migrante sent a follow up letter to POLO-Riyadh about the case of Marza and two other co-workers who were also not paid for their work.

Monterona said that Labor Attache Restituto Dela Fuente and a certain Labor Officer Abdulla promised that Marza could be sent home as soon as the employer agreed.

Since then, Migrante received no word from the POLO-Riyadh.

Migrante Middle East criticized the Philippine Embassy in Kuwait for publicly accusing them of fabricating and exaggerating complaints of OFWs in Kuwait.

Monterona called on Senator Jinggoy Estrada, chairman of the Senate House Committee on Labor and Employment and Senate President Manny Villar to conduct a probe regarding these cases. He said that Philippine Embassy officials in Kuwait involved in these cases such as Endaya, Crisostomo and Glen Sayson should be summoned for investigation. (Bulatlat.com)