A group of Filipino migrants is alarmed over the sudden increase in the number of Filipino workers in the United Arab Emirates who reportedly committed suicide.

The Migrante International chapter in the United Arab Emirates (UAE) expressed alarm over the increase in the reported cases ‘suicide’ of Filipino workers.

In a statement, Nhel Morona, Migrante-UAE secretary general, revealed that from February to August of this year alone, the Migrante chapter in Dubai has already recorded seven cases of ‘suicide.’ 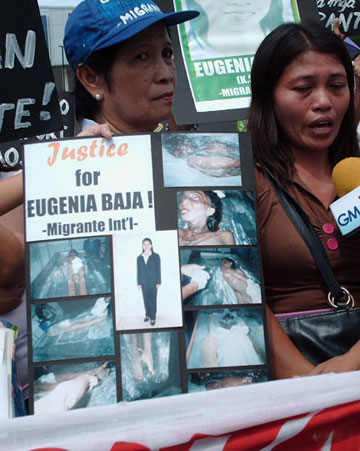 Already repatriated to the Philippines were Mitos Vergara who reportedly jumped from a building on June 24 and Remedios Waayan.

As of press time, Myrna Baylosis who reportedly jumped from the 4th floor of a building July 8, is still in the custody of Abu Dhabi Police.

The group is still confirming two other reported cases of ‘suicide’ in Abu Dhabi.

Morona said, “We do not want to see another Eugenia Baja.”

Members of the Migrante International accompanied Baja’s sister Elizabeth Garcia and So’s mother Yolanda to the Department of Foreign Affairs (DFA) August 13. They asked for the re-investigation on the deaths of their loved-ones.

Morona criticized government officials in the Emirates for simply declaring the mysterious deaths as ‘suicide’ cases without conducting a thorough investigation.

In a dialogue with Migrante, DFA Executive Director Crisencio Relasyon agreed to investigate the cases of Baja and So.

Morona said the DFA should instruct Philippine government officials in UAE to investigate the cases monitored by Migrante. He said that if the autopsy reports would reveal that there is foul play, our officials abroad should file cases against the perpetrators. (Bulatlat.com)